After Rahm Emanuel’s Neoliberal Nightmare, the Next Chicago Mayor Must Embrace Reparations

You Are Here: Home » Reparations » After Rahm Emanuel’s Neoliberal Nightmare, the Next Chicago Mayor Must Embrace Reparations 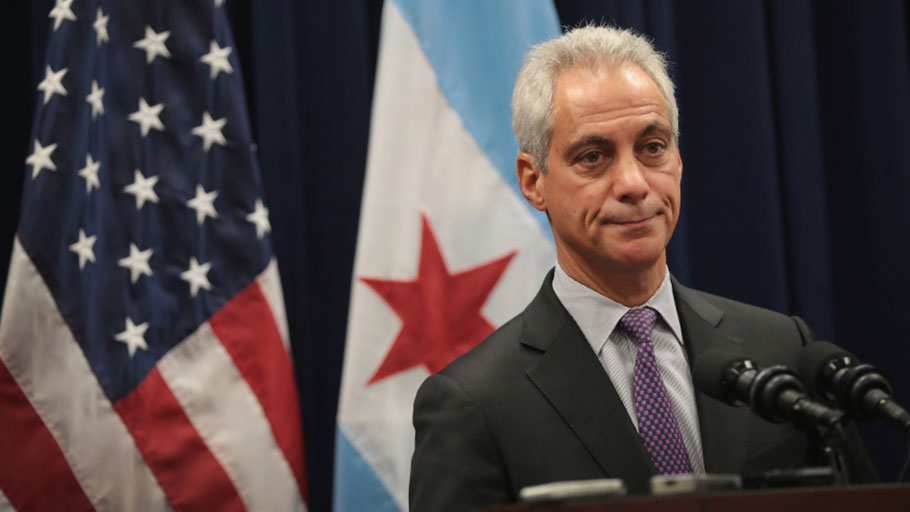 Rahm Emanuel is leaving, but the damage he’s caused needs to be reversed. (Scott Olson/Getty Images)

Emanuel’s pro-corporate policies ravaged Black and Latinx communities across Chicago. His successor will be tasked with reversing this trend.

By Saqib Bhatti, In These Times —

This week, Chicagoans celebrated Rahm Emanuel’s announcement that he will not seek another term as mayor. But while Emanuel’s departure is welcome news to many, the next mayor of Chicago will have to come up with an aggressive plan to repair the damage that Emanuel’s financial policies have inflicted on the city’s Black and Latinx communities. Otherwise the devastation that Emanuel’s tenure in office wreaked on Chicago’s communities of color will be with us for decades to come.

Mayor Emanuel systematically monetized pain in communities of color to enrich his Wall Street backers. Since he took office in May 2011, Chicago has paid $346 million in police misconduct settlements and judgments. Emanuel paid a large portion of these costs by taking out bonds, which must be paid back with interest. The interest and fees on these bonds add up to hundreds of millions of dollars, which the city pays before ensuring there is funding for critical public services. When faced with a budget crunch, Emanuel closed mental health clinics, which could have played an important role in preventing people of color from having adverse contact with racist police officers.

In 2017, the mayor borrowed $225 million to pay for future police misconduct settlements and judgments. In other words, Emanuel gave his buddies on Wall Street an advance payment on the lives of Black and Latinx Chicagoans whom he knows his police department will brutalize or murder at some point in the future.

Similarly, the mayor and his appointees on the school board refused to take legal action against the banks that fraudulently sold the city and school district toxic swap deals. Chicago Public Schools paid banks such as Bank of America $36 million a year for these toxic swaps—enough money to reverse the 50 school closings Emanuel oversaw in 2013. But not only did Emanuel refuse to take legal action against the banks, he actually signed multiple agreements waiving Chicago’s right to recoup its losses through legal action.

Emanuel also used the city’s Tax Increment Financing (TIF) program as a slush fund that drained money from the city’s neighborhoods and schools in communities of color and funneled it into tax subsidies for developers and wealthy corporations in the richer, whiter parts of the city.

All of these financial shenanigans are part of the neoliberal regime that has dominated City Hall for the past few decades under Emanuel and his predecessor, Richard M. Daley. Like Donald Trump, they believed making Chicago great again meant bringing back the white people who had abandoned the city for the suburbs during white flight. In order to lure rich white folks back to the city, they ignored the needs of Chicago’s communities of color, whom they did not deem worthy of the city’s resources. While defending the closure of schools in Chicago’s Black neighborhoods, Emanuel reportedly told Chicago Teachers Union President Karen Lewis, “25 percent of these kids are never going to be anything. They are never going to amount to anything. And I’m not going to throw resources at them.”

Daley and Emanuel repealed progressive corporate taxes and funneled tax money from the neighborhoods into downtown. They manufactured budget crises in order to justify the privatization of the city’s infrastructure, the charterization of its school district, and attacks on city and school district employees and their pensions. The perennial budget crises that resulted from these irresponsible decisions were then used to justify risky financial deals that were highly lucrative for Wall Street and ultimately cost taxpayers billions of dollars.

These policies have left deep scars, both in the city’s neighborhoods and in its bank accounts. The next mayor will not be able to wave a magic wand and undo all the damage that decades of neoliberal rule have wrought. The city and school district’s structural budget deficits are all too real. Before the next mayor can even start to think about righting the wrongs, they will need to find money under the couch cushions just to keep the lights on.

The next mayor needs to flip the script. They need to aggressively raise revenue from the wealthy parts of the city in order to repair the damage to the South and West Sides. For decades, Black and Brown Chicago have been forced to shoulder the costs of Daley and Emanuel’s burning desire to revitalize White Chicago. The next mayor will have to target Black and Latinx communities for investment coming from progressive revenues sources that make rich residents in White Chicago and the major corporations downtown pay their fair share. These wealthy interests have benefited for nearly 30 years from policies that have prioritized the needs of corporations over those of poor communities of color. Chicago’s next mayor needs to make White Chicago pay reparations to Black and Brown Chicago to start to reverse these inequities and right these wrongs.

Why Putin is an ally for American evangelicals

Why Putin is an ally for American evangelicals
We Need Your Support — Donate, Share, Sign-Up Ways to Support