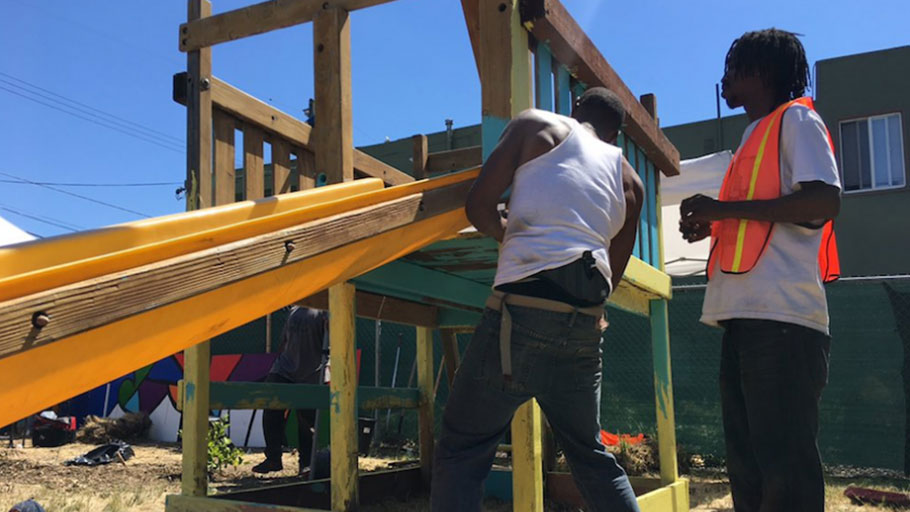 You Are Here: Home » Blog » Reparations » How Black Communities Across the Country Are Retaking Land and Demanding Reparations

A conversation with Chinyere Tutashinda of the BlackOUT Collective.

Juneteenth is not a federal holiday—but it should be. It is the day that the news of emancipation reached the last group of enslaved people in Galveston, Texas, months after the Emancipation Proclamation and even the official end of the Civil War. To mark the day, and its unfulfilled promises, a group of organizers planned a day of action: reclaiming vacant land—40 acres in 40 cities, to be precise. From Atlanta to Oakland, Chicago to New Orleans, anchored by the BlackOUT Collective and Movement Generation, black people claimed and held land, taking space to have community dinners, put vacant spaces back into the commons and challenge gentrification—as well as amplify the demand for reparations. Chinyere Tutashinda of the BlackOUT Collective told me about the plan.

Sarah Jaffe: Monday was Juneteenth. For people who don’t know what that is. Can you tell us, first of all, the history of the day and why it is important to mark it with action?

Chinyere: Juneteenth is a very interesting and sad story all wrapped in one. It actually celebrates and commemorates the day when a group of enslaved Black folks in Texas found out about the Emancipation Proclamation and learned that slavery was officially over in their area and they could be a part of the Union army. This happened months after the Proclamation was declared. That happened in February, and in June they found out that they were actually free. It celebrates and commemorates the day of freedom. Also, the reason is that it wasn’t to the benefit of those who enslaved a group to actually communicate this. So, it took months and months of networks of enslaved folks to be able to get that message to them. Juneteenth is the day that commemorates that.

Sarah: Tell us about the actions that are taking place and the significance of the plan that you guys went forward with.

Chinyere: The BlackOUT Collective, in collaboration with Movement Generation, began having conversations. Movement Generation approached us and said we decided to really structure and shift some of our work to focus on Black liberation, and what does that look like? As a group that is primarily rooted in direct action, we really wanted to jump on the opportunity to expand our work a little bit further and play around with what these long-term and protracted actions look like. We have a relationship, one, with the land and then, two, really thinking about conversations around Black liberation tied to land and to reparations. Knowing that if we are talking about freedom in this country, then we also need to be having a real, concrete discussions about what’s owed to people who have a history of enslavement.

Sarah: Talk a little bit more about the actions and the places where these are taking place.

Then, we put out a call to action about a month ago inviting people to join us in this project. Actions are going to take place across the country in a variety of different ways. Some people are looking at long-term occupations and creating community spaces. Some are just day-long actions where people are holding conversations about reparations, land and Black liberation and how all three of those are tied together. They’ll be different, but the goal is to be able to take up space, build communities, and be in right relationship with each other and with the community at large.

Sarah: There were a few spaces held like this last summer in Chicago and in Los Angeles.

Chinyere: There were. We helped with the freedom actions last summer that were in response to the murder of Alton Sterling. Out of that, one of the actions was Freedom Square in Chicago that was held by folks from Black Youth Project 100 and a bunch of other different organizations that really played around with “What does it mean to hold space?” And they did so at a place where Black people had been tortured and imprisoned. So, people have been playing around with it. I know the Los Angeles Black Lives Matter chapter last summer also did occupations and held theirs really long with the Freedom Now actions.

Sarah: Tell me about the importance of holding the space and of talking about reparations. During a time when Donald Trump is president, it can seem like everything is short-term resistance. Talk about doing radical actions and making radical demands in this moment.

Chinyere: There has been a huge upheaval in this country around the results of the election and people going, “What to do?” and “What does it mean?” and all of this stuff. You have hundreds of thousands of newly activated people, but it is really critical that even in this moment, we continue to remember that the struggle is long and that it is one that requires us to not only react to things that are happening, coming down from the federal government or local government or state government. It also requires us to really think about how we are in relationships with each other, with the land around us, rooted in an understanding of the history of oppression in this country. This is one of the reasons why this action, in particular, is not just about the current moment, but it is rooted in history and rooted in land.

Sarah: Tell us a little bit about the BlackOUT Collective, where that came from and the work you have been doing over the recent years.

Chinyere: We started in 2014, literally in front of the Ferguson Police Department, from a group of trainers. Some trainers from the Ruckus Society, which is a non-violent direct action training group, and some trainers with the Center for Story-based Strategy. We were sitting there and, as we were trying to come together as a group of Black trainers, realizing that we’d reached out to a lot of people we knew who had done direct actions, but there weren’t that many who identified themselves as direct action trainers as Black people. We wanted to shift that. We wanted that to grow. We wanted that to change drastically. As Black people, we have been using direct action tactics for hundreds of years fighting for our own liberation.

So, we started there and have continued to grow. We trained, over the course of two-and-a-half years, almost a thousand Black people in direct action tactics. We are slowly growing and building our network through our action practitioners and are going to have our first all-Black practitioner camp and visioning session this summer. We have also worked really closely with leadership positions within the Movement for Black Lives. So, a lot of the national calls to action, we have been supporting locally and nationally. That is a little bit about who we are.

Sarah: We talked about the need to keep making forward-looking demands, but what do you think has changed in terms of the Movement for Black Lives in a world where Trump is president?

Chinyere: There are a lot of people who are out on the streets. I think there is a lot of interest and a lot of people who have been newly politicized and woken up to the fact that now Trump is our president. This is not new for us, because a lot of folks, particularly those in the South, have been living under conditions very similar to the ones that Trump is trying to enact nationally.

Chinyere: I think it is both/and. I would say that there are a lot of new organizations that sprung up in the last couple of years, and then there are a lot of baby organizations that started a few years before, say 2014, and were in their growing phases and since then have really blossomed and have been nourished in their organizing the last few years. But, it is a struggle. There is a struggle in teaching people who are newly politicized—and even for those who have been organizing for a really long time.

There is a lot of excitement in really thinking about new ways to organize ourselves, new ways to continue to absorb the new people who are interested and excited and want to be involved. I think that is happening. There has been a lot of action on the street. There is also a lot of action that is happening in buildings and in classrooms and in meetings as people are really growing through organizing strategies and new ways to be in community with one another.

Sarah: You made a point about people having been living under governments like Trump and that, particularly for Black people, Trump may have not have been as much of a surprise as he was for some other folks in this country. I’m thinking about this in connection with the fact that we are often disconnected from our history in this country, which is why I wanted to start out by asking you to tell people what Juneteenth is. I would love for you to talk about the importance of knowing the history of struggle in this country, which isn’t taught to us in school, and why that is important to understand the politics we are dealing with today.

Chinyere: I think that it is important. One, if we don’t know history, we will very often think that what is happening now just all of a sudden happened. We also, especially as oppressed people, will take in the story that we are continuously told around individualism, around meritocracy, and believe that you are where you are or your people are because of something that you personally did right or that you didn’t do wrong and not understanding that there are systems at play, that there is a long history of oppression in this country, that things are set up intentionally to work a certain way.

Sarah: How can people keep up with you and the BlackOUT Collective and find out more information on the Juneteenth actions?

Chinyere: There are a couple of ways. We have our website, BlackOUTCollective.org. We also are on social media. So, Twitter @blackoutcollect, on Facebook the BlackOUT Collective. If you are interested in learning more about the Black Land and Liberation Initiative, they can follow us at blacklandandliberation.org/, as well as on social media.

Interviews for Resistance is a project of Sarah Jaffe, with assistance from Laura Feuillebois and support from the Nation Institute. It is also available as a podcast on iTunes. Not to be reprinted without permission.

Sarah Jaffe is a staff writer at In These Times and the co-host of Dissentmagazine’s Belabored podcast. Her writings on labor, social movements, gender, media, and student debt have been published in The Atlantic, The Nation, The American Prospect, AlterNet, and many other publications, and she is a regular commentator for radio and television. You can follow her on Twitter @sarahljaffe.