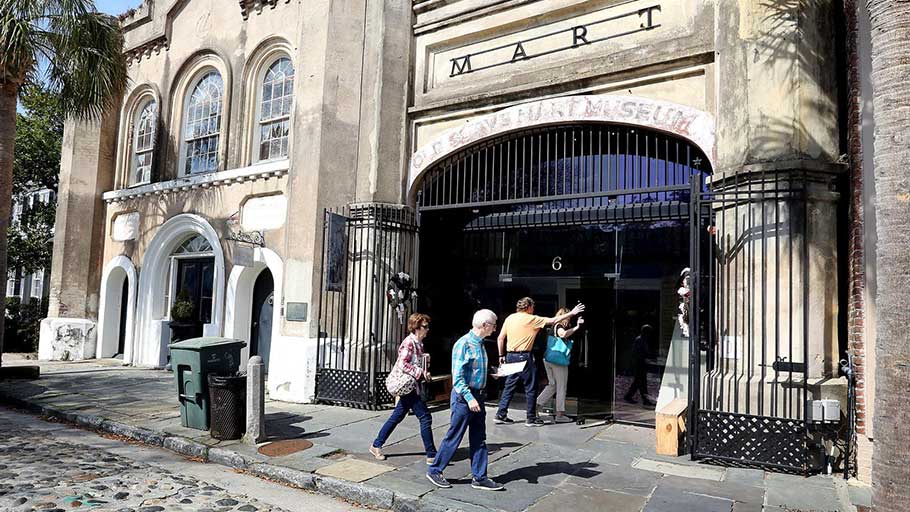 You Are Here: Home » Blog » Reparations » Charleston, once known as the US’s slave trade capital, to host national reparations forum

A free forum on reparations for slavery at the Gaillard Center on Nov. 2 will be hosted by the National African American Reparations Commission (NAARC), the American Civil Liberties Union (ACLU) and the American Civil Liberties Union of South Carolina. Charleston’s wealth was built and sustained for centuries on an economy that relied on slavery. Pictured here is the Old Slave Mart on Chalmers Street in downtown Charleston.

A national forum on reparations for slavery will be held next month in Charleston, a Southern city whose wealth was built and sustained for centuries on the economy of buying and selling human beings into bondage.

The long-term goal is that the educational event will spur passage of a bill to establish a commission to study and develop reparation proposals, as well as consider a national apology for slavery.

Announced Thursday, the event will be the second in a series of forums on the topic. The first was held earlier this summer in Washington, D.C.

“History is fact. History doesn’t have a political party. We know what happened in America, and whether you are a Republican or a Democrat, the facts don’t change,” said Jeff Robinson, deputy legal director for the ACLU.

After pointing out visitors can still see the fingerprints of formerly enslaved children in the bricks in downtown Charleston, Robinson urged people to confront this painful history.

“What I think a lot of people want to do is to say, ‘Oh, those things happened, but it was a long time ago and we’re past that already,‘” Robinson added. “And what I would like to say to those folks is ‘Come to this forum and listen to the information that will challenge your belief that slavery and its vestiges ended in 1865.’”

The forum seeks to connect the dots in showing how slavery negatively and systematically impacted the economic, societal and physical well-being of black Americans for generations.

The proposal to establish a commission to study and develop reparations has been pushed in Congress since 1989 but has failed to gain traction. Earlier this year, the bill was introduced by Democratic U.S. Rep. Sheila Jackson Lee of Texas.

The bill legislation mirrors an effort introduced previously by former congressman John Conyers of Michigan and has 118 cosponsors. All are Democrats.

House Majority Whip U.S. Rep. Jim Clyburn of South Carolina, who is black, is a co-sponsor, as well.

“Reparation is by definition ‘the act of making amends,’ and how to make amends for the ravages of slavery is a debate whose time has come,” Clyburn wrote in a piece published in the summer 2019 edition of HBCU Times, a magazine dedicated to positive news from historically black colleges and universities.

Clyburn has questioned how reparations could be fairly distributed. In a March interview with The Post and Courier, Clyburn said “pure reparations would be impossible to implement.”

“He believes there are better methods than just writing a check,” Cunningham spokeswoman Rebecca Drago said in a statement provided to The Post and Courier ahead of the forum’s announcement.

The issue has also emerged as a niche campaign topic for the 2020 Democratic presidential candidates. Organizers said they had not invited any of the candidates but welcomed them to attend.

In Charleston, it is estimated that more than 40 percent of enslaved people in the United States came through the city’s port.

Last year, Charleston City Council members voted to apologize for the city’s role in slavery. The resolution, which narrowly passed, did not include reparations, which some community members had sought at the time.

This article was originally published by Post and Courier.