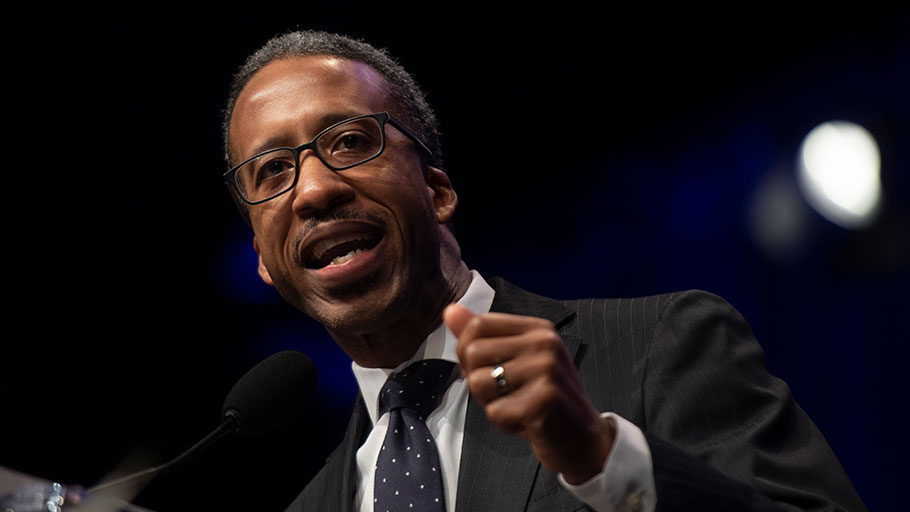 The nation’s capital would be the latest jurisdiction to seriously explore providing reparations to the descendants of enslaved people under legislation proposed by a member of the D.C. Council.

The bill to establish a task force to study reparations comes after District residents demanded racial justice and equity during protests over the summer after the police killing of George Floyd in Minneapolis. Announced Monday by Council member Kenyan R. McDuffie (D-Ward 5), the legislation would instruct the nine-member task force to scrutinize the economic impact of slavery as well as racist policies that continued after it was abolished to recommend a plan for economic atonement to help African Americans in the District.

“This is unprecedented, albeit timely — though most would say it’s well past time,” McDuffie said. “We’re asking the task force to look at the history of racism in D.C. and what structural racism has resulted in for African Americans in the city.”

If the measure passes, the District would join Asheville, N.C., Evanston, Ill., Providence, R.I. and others in a list of U.S. cities that have taken purposeful steps toward offering reparations in recent months. Last week, California Gov. Gavin Newsom (D) signed a similar law establishing a task force to analyze the state’s role in slavery and make recommendations for reparations.

Sen. Cory Booker (D-N.J.) and Rep. Sheila Jackson Lee (D-Tex.) have authored legislation to establish a national commission to study reparations for the descendants of enslaved people, though it is unlikely to advance while Republicans control the Senate. Democratic presidential candidate Joe Biden supports a study of the issue. Some Republican lawmakers have dismissed the idea and called compensating descendants of enslaved people unviable.

McDuffie’s bill will be paired with a resolution he sponsored that declares racism in D.C. a public health crisis, mirroring steps taken by many local and state leaders across the country. He cited disparities in life expectancy, infant mortality and maternal mortality that disproportionately affect the city’s Black residents and neighborhoods — outcomes he said didn’t occur by happenstance.

“Using any measure of success: education, health, housing, employment — Black people are the bottom of every category,” McDuffie added. “Race is the thing that weaves itself through all those statistics. It’s not simply an issue of Black people pulling themselves up by their bootstraps.”

McDuffie, a third-generation Washingtonian, has been one of the leading voices on the council for addressing racial inequality and placing it at the center of policymaking.

Under McDuffie’s proposal, the mayor would appoint five members of the task force, including an academic who specializes in civil rights and two people from major civil society and reparations organizations. The council would fill the remaining slots, with no more than four seats belonging to council members themselves.

The group would meet by June 1, 2021, and complete their proposal by July 1, 2023, providing a detailed report that answers questions about eligibility for reparations, the type of compensation and how it should be awarded.

Ron Moten, a longtime anti-violence and racial justice D.C. activist, applauded the move to study reparations as a necessary step to address the city’s wide racial disparities as well as gentrification.

“If you look at all the stuff that’s happened to African Americans in Washington, D.C., alone, a lot of us built D.C. when no one wanted to be here and now we are getting pushed out,” said Moten.

He also said supporting the reparations movement is a way for people who joined protests after Floyd’s death to back up their chants of “Black lives matter.”

“They love to say it, but when you get down to the nitty-gritty and let’s fix it and let’s make it right, they say, ‘Hold up, we’re moving too fast,’ ” said Moten. “It can’t be the new buzzword — Black lives matter — if it’s really not going to matter.”

The U.S. Conference of Mayors is among the organizations that supported federal legislation to study the feasibility of reparations on a nationwide scale, endorsing the movement at its July conference.

Greg Fischer, the mayor of Louisville and president of the group, said city leaders have used the language of reparations on initiatives to address the racial wealth gap, such as grants to help African Americans purchase homes.

Fischer, a Democrat, recently outlined several overhauls intended to address policing in his city, which has been rocked by the March 13 killing of Breonna Taylor.

“It’s about addressing the wrongs of our history and some of the institutionalized racism that led to this obviously super timely conversation for the country right now,” said Fischer.

Woullard Lett of the National Coalition of Blacks for Reparations in America, which advocates for the issue nationwide, said passage of McDuffie’s bill would bolster the push to pass a reparations study out of Congress.

He also said a study in the District would be particularly noteworthy because the seat of federal government had once paid restitutions after the end of slavery — to the former enslavers. The District of Columbia Compensated Emancipation Act of 1862 freed enslaved people in the capital and paid their former owners up to $300.

“D.C. paid the enslavers, not the people who had been slaved, reparations,” said Lett. “The fact that the government is now considering taking into account the injuries against the African people is an acknowledgment of the humanity.”

Other D.C. Council members have not yet weighed in on the task force, which would be the first of its kind in the District. It’s reminiscent of a recent effort by Georgetown University students who voted in favor of a plan for the school to pay reparations to the descendants of enslaved people — sold in the early 19th century to pay off school debts — using a mandatory student fee.

Last year, the university announced plans to provide $400,000 or more per year to fund community-based projects in Louisiana and other locations, but student activists expressed frustration that the money would be collected through fundraising rather than student fees.

McDuffie said he appreciates private-sector efforts to provide reparations, but said it’s crucial to have a government-led effort as well. Reparations offered to District residents would be in addition to anything that would be provided at the federal level.

“History has demonstrated that it’s government-sanctioned actions that deny wealth-building opportunities to Black Americans,” said McDuffie. He added that the task force would offer “factual predicate to take action, so Black descendants of enslaved people might finally be compensated for their labor and centuries of contributions.”

“Rocks Just Laying Around” Rev. Jesse Jackson on the Value of the Black Vote

“Rocks Just Laying Around” Rev. Jesse Jackson on the Value of the Black Vote
We Need Your Support — Donate, Share, Sign-Up Ways to Support