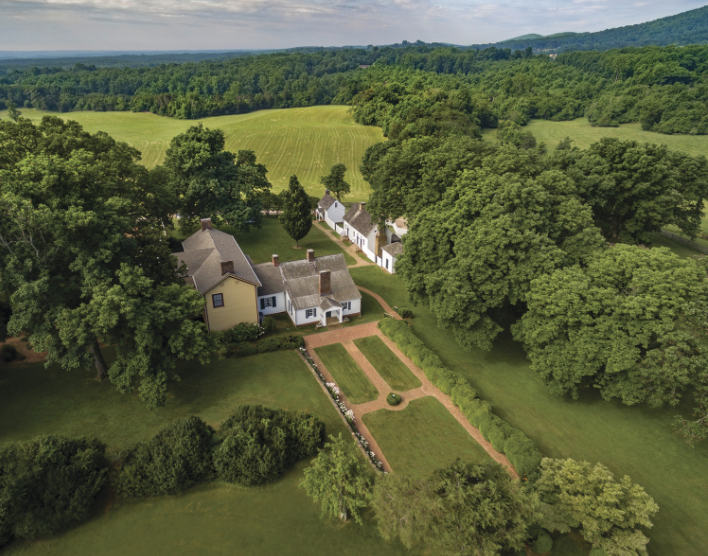 Growing up, George Monroe Jr. avoided the historical site that was just a few miles from his family’s property in Virginia, James Monroe’s Highland.

“To be honest with you, the old folks, the family back in the day, they frowned on it,” he said. “Who really wants to go visit a plantation, knowing your family members were enslaved there?”

But when an archaeological discovery there a few years ago made headlines, he was drawn to the Virginia property once owned by the fifth president in Charlottesville. And when he told a staff member about what his family had always told him about their past, he forged a connection: Now he’s one of a council of descendant advisers who are helping to reframe the way history is told at the site, a narrative that no longer simply glorifies the Founding Father, but also tells a far more complicated history that interweaves the experiences of the elite alongside those of the people Monroe enslaved, those who also lived on the estate.

The revelation last week that the namesake of Johns Hopkins University had enslaved people — despite long being touted as an abolitionist — was another reminder of the complexities of the past.

Johns Hopkins, benefactor of namesake hospital and university, was an enslaver

At the College of William & Mary, efforts to grapple with that began in earnest in 2009, a couple of years after students urged deeper research of the school’s history, and have turned up evidence that nearly 190 people were enslaved by or at the school. The school is building a memorial to those people, continues to search for their names and is doing outreach in the community, offering guidance with genealogical research, among its efforts.

At Highland, the former home of a William & Mary alumnus that was donated to the public college, there’s a simultaneous drive to portray a far more inclusive, nuanced and painful history.

Sara Bon-Harper, executive director at Highland, was introduced to another descendant by a mutual friend not long after George Monroe Jr. ventured onto the grounds. And as time went on and conversations continued, those descendants and their families took on an enduring influence.

Often, the people most harmed by events of history are not the ones to tell the story, Bon-Harper said. Museum directors and academics often are outsiders, not community members with direct ties to the place.

“Having a council of individuals who are deeply invested in this history be an outside advisory board is a new way of doing history,” Bon-Harper said, a collaboration that grew out of a meeting with the National Trust for Historic Preservation a couple of years ago.

Core to her approach is the idea that discussion of slavery and of individual people who were enslaved should not be separate from the story of James Monroe, she said. The politics, the economics of the time, the culture are all intertwined. “The social and political environment that they all inhabited together, this is really central to how I envision telling history at Highland.”

When they were talking about how to relate the former president’s diplomatic initiatives, such as the impact of the Louisiana Purchase, George Monroe Jr. said he thought it was really important to talk about Liberia in that context.

“It completely fit,” Bon-Harper said. “Yes — that is an important part of the story.”

The West African nation of Liberia began as a settlement of the American Colonization Society populated from the United States by free Blacks as well as formerly enslaved Blacks. Its capital, Monrovia, was named for James Monroe.

Some William & Mary students have become involved in the Highland project, as well. After a petition effort earlier this year decrying funding going to a former plantation that used enslaved labor, some students connected with the museum and the descendant council to learn more about Highland.

“I think it’s just a great example of hearing something and deciding for yourself, ‘I want to find out more about this — and see if there’s more to the story,’” said Jody Lynn Allen, director of the Lemon Project, William & Mary’s research effort named after a man who was enslaved by the college.

She said community members had told the Lemon Project that they felt unwelcome on campus. Several Black people echoed the same words. “They remembered when you couldn’t be on campus if you weren’t pushing a broom,” she said. There is a brick wall around the older part of campus. “A lot of people in the Black community felt that was a literal boundary to them,” she said. So efforts to include the broader community, by opening classes on genealogy and public history to community members, for example, are ongoing.

Jennifer Stacy, another descendant, told the school’s board of visitors this fall about the impact it had on her mother and others to share memories they had bottled up for most of their lives. Her mother didn’t talk about the racially oppressive Jim Crow era or wonder what her ancestors did at Highland, she said. Now she’s having those conversations. “It’s an opportunity to educate the world and have a dialogue we probably should have had a long time ago,” Stacy told the board.

People should understand the complexities, said George Monroe Jr., understanding that James Monroe championed freedom but enslaved some 250 people. “A lot of the atrocities they experienced are watered down, and most folks don’t understand the generational impacts of that,” he said. “My involvement with Highland allows me to set the record straight, and tell a complete history.