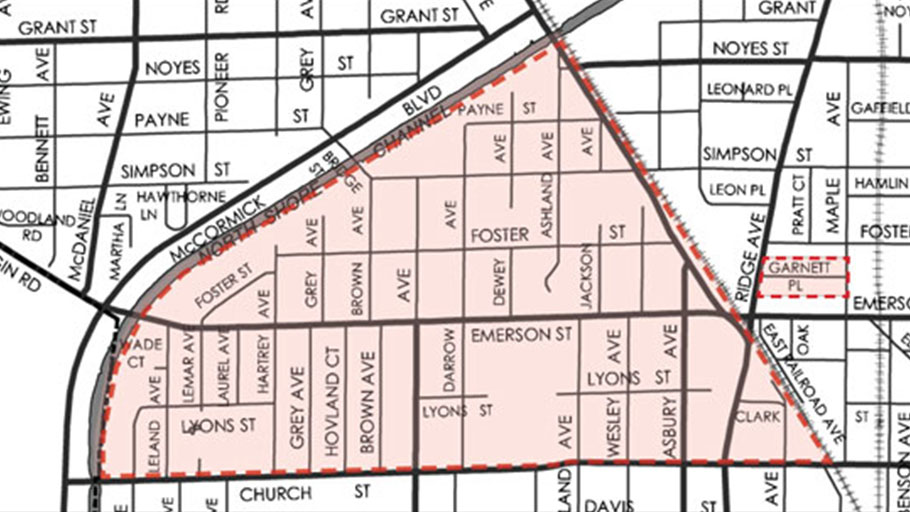 A proposal to form a permanent Reparations Subcommittee is scheduled to be introduced at City Council’s meeting on Oct. 26.

Last November, City Council decided to deposit into a Reparations Fund up to $10 million in City tax revenues collected from the sale of recreational marijuana. Council also created the Reparations Subcommittee and asked the committee to consider the viability of two recommendations: 1) housing assistance and relief initiatives for Black residents in Evanston and; 2) various economic development programs and opportunities for Black residents and entrepreneurs in Evanston.

On Aug. 28, the Reparations Subcommittee decided to recommend that City Council approve the use of $400,000 in reparations funds for housing assistance programs that would benefit an estimated 16 households. The $400,000 would be used to help qualified Black residents to purchase homes, to improve their homes, and to pay their mortgages.

The Subcommittee, composed of Aldermen Robin Rue Simmons, Peter Braithwaite and Ann Rainey, will consider additional uses of the Reparations Fund as time goes on.

Plans for a STEM School in the Fifth Ward

Henry Wilkins, a member of an Education Subcommittee for Reparations, said that subcommittee had BOTH a short term goal and a long term goal. This subcommittee has not been formed by City Council or the School Districts.

The short term goal, Mr. Wilkins said, is to bring Black history to the classrooms by leveraging the work of Shorefront Legacy.

“With the police killing folks, I’m more empathetic to teaching more about Black history and to increase individuals’ understanding and appreciation for Black people.

“We also thought covering more Black history will help to educate and enlighten folks on why reparations are needed.”

In the long term, he said, the Education Subcommittee supports opening a STEM community school located in the Fifth Ward.

“And I would also like to go on record and say that the intention for the STEM community school is that it be a remedy for the damage that was caused as a result of Foster School being moved out of the Fifth Ward, and kids being forced into like, a one-way busing situation,” said Mr. Wilkins.

“Today, Black kids have to travel further than any other race, … and “we know there’s an opportunity gap that exists particularly in the schools that the Fifth Ward kids are assigned to.”

Mr. Wilkins said the subcommittee recognized that gentrification was occurring in the Fifth Ward. “However, we are constantly thinking of ways to ensure that this school will serve the families that we intend for it to serve,” he said.

Mr. Wilkins said the STEM focus was chosen for three reasons. First, he said there is a high demand for STEM careers. Second, the United States lags behind other developed countries in terms of math and science. So this pursuit would help increase America’s standing in the world.

“The third reason is that STEM provides a lifetime love of learning,” Mr. Wilkins said. “So no matter what career you pursue, kids are excited about learning. … It provides a good building platform for your entire life.”

Mr. Wilkins said he and other members of the Education Subcommittee have talked to the leaders of many organizations and community members, and have been working to increase awareness and build support. After looking at the voting patterns in 2012 referendum to build a new school in the Fifth Ward, he said they plan to take a different approach than that taken in 2012.

Mr. Wilkins said members of the subcommittee plan to conduct a feasibility study of establishing a school in the Fifth Ward. He said they received a grant of $25,000 from the Evanston Community Foundation to assist in doing the study.

Ald. Simmons said, “I want to say thank you for leading this group, and convening the group and being an excellent communicator on behalf of what the goals are.”

Ald. Braithwaite said, “This has been something that many in the community have been fighting for, but you’re actually doing the work.”

Ald. Simmons added that City Council directed the Reparations Subcommittee to look at using the Reparations Fund to provide housing assistance and promote economic development. She said, though, that in community sessions, people suggested addressing education, and the Education Subcommittee’s plans addressed that concern.

She added, “Health is something that we need to be giving attention to, especially trauma in the Black community. As Black folks from the continent, we have inherited trauma. … We have trauma that lives in our DNA from the transatlantic slave trade. We experience trauma daily through micro and macro aggressions, racial terror, and so on. So that’s another area that isn’t named in our policy, but we do need to pursue it as a community.”

Jonathan Perman, a representative of Horizon Realty Group, presented an idea to generate additional reparations funds from developers who were seeking approval of a planned development in Evanston. He suggested that the City recognize that a donation to the Reparations Fund is a “public benefit” within the meaning of that term in Evanston’s Zoning Code.

Mr. Perman, who served as Executive Director of Evanston’s Chamber of Commerce for 18 years, said Horizon is in the process of seeking approval of a 215-unit apartment building in the 1600 block of Chicago Avenue.

He said customarily the public benefits have benefited the immediate block of a development or the immediate neighborhood, and they have rarely expanded to the entire community.

He said, though, that in putting together ideas for public benefits for the development on Chicago Avenue, “we decided that, in addition to doing some things like some infrastructure improvements in and around the area and some public art, that we wanted to make a serious cash contribution for what would be intended to go towards human and social service needs. And we came up with a number of $300,000, or a half a percent of the construction cost of the project.”

And Horizon decided that instead of writing a check that would be for general social and human services, they would take one-third of the $300,000 and make a $100,000 contribution to the Reparations Fund.

Mr. Perman explained that Horizon is a developer, primarily building housing. And Evanston’s Reparations Fund is focused, at least for now, on providing a remedy for past housing discrimination. “And so, to us, there’s a real nexus between what we’re doing in building new housing, and what the Reparations Subcommittee is wanting to provide.”

Mr. Perman added that Horizon’s taking this step might send a signal to the real estate development community as a whole, “so that in future, other developers would make contributions to the reparations fund.

“It could even be codified and become a more direct guideline, since there aren’t any guidelines really codified. And that’s something that we’d be glad to work with you on and wrestle with before the City Council.”

She said she and Ald. Simmons were the only alderman who previously argued that a certain project provide public benefits for the entire community.

“But I think your idea might be more acceptable,” said Ald. Rainey. “And when you get right down to it, there’s absolutely no reason why the term public benefit doesn’t mean benefiting the public as opposed to immediate neighborhood project benefit, which is what most people have directed public benefits to be.

“I am in full support of your concept,” said Ald. Rainey.

Ald. Braithwaite said, “I’m excited about this proposal.” He added that it would not only make an impact in Evanston, but it could be replicated by other communities who were considering reparations.

Ald. Simmons also supported the proposal. She said planned developments are often located in affluent neighborhoods that have less need for a public benefit than “disinvested neighborhoods in the Fifth, in the Eighth in the Second Wards and some other pockets around the City.

“I really look forward to the potential for this to be a tremendous, a tremendous partnership, and a model that we can use to expand the goals of reparation,” Ald. Simmons said.

Ald. Simmons said the Reparations Subcommittee had some good discussions with a financial institution to prepare “a portfolio of financial products for reparation” for residents who were certified as meeting the qualifications for reparations.

There is no formal agreement yet, but Ald. Simmons said, “Our goal was that we have a financial partner that has special loans, which could include a special rate; it could include assistance with closing costs; it could include other consumer loan products, financial education; other types of incentivized bank accounts; and we’re waiting for that portfolio of packages.”

The Reparations Subcommittee has not sent its recommended housing assistance programs to City Council for approval yet, because there are still a lot of details to work out, including what is the process to qualify people to receive reparations.

Ald. Simmons said the Subcommittee may develop a plan to certify that people are qualified to receive reparations.

City Council will consider a proposal to be introduced on Oct. 26 to establish a permanent Reparations Subcommittee composed of aldermen and community members. Ald. Simmons said, “It’s important that this work is institutionalized and that it lives beyond any individual’s vision or leadership and that this is a commitment to the Black community, even beyond the initial 10 years of which is written.

“It’s taken generations and the founding of our City to get to these positions of disparity, racial disparity. So we certainly need to have multiple generations of this service work. And it probably should go into perpetuity based on the damages, either way.”