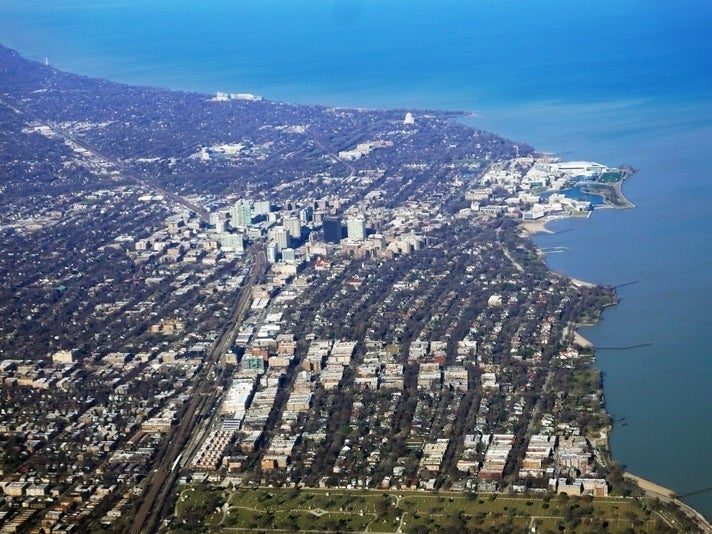 EVANSTON, IL — Qualifying Black Evanstonians could be eligible for up to $25,000 toward the costs of homeownership under the initial phase of the first-of-its-kind municipal reparations program aldermen authorized last year.

The proposed housing reparations initiative have taken shape over more than a dozen meetings of the Evanston City Council Reparations Subcommittee since January, although the details are still being worked out.

As it stands, Black residents seeking reparations from the city would have to show they lived in Evanston between 1919 and 1969 and suffered housing discrimination by the city during that period. Their direct descendants would also qualify for the money.

Funding for the program comes from cannabis sales tax revenue from Evanston’s marijuana dispensary, as well as some private contributes. As of last month, the fund had nearly $100,000, though that reflected only July and August — the first two months where local governments could receive tax revenue from recreational weed sales in their towns.

The city’s first $10 million in cannabis tax revenue will be deposited into the fund, according to the November 2019 ordinance that authorized the reparations program. With only one marijuana dispensary in Evanston due to challenges to the state’s new licensing program, city officials said they expect to collect about $1 million in the program’s first year.

Reparations Subcommittee Chair Ald. Robin Rue Simmons, 5th Ward, said she was curious to find out how many of the city’s approximately 12,000 would be eligible for the draft housing reparations program, which would be followed by a yet-to-be-determined form of economic development support.

“This is a tremendous program that has been supported by the city of Evanston, the City Council, the residents, largely. This is not to replace federal reparations, or HR 40,” Rue Simmons said. “This is one step toward repair that we are years ahead of any other municipality.” 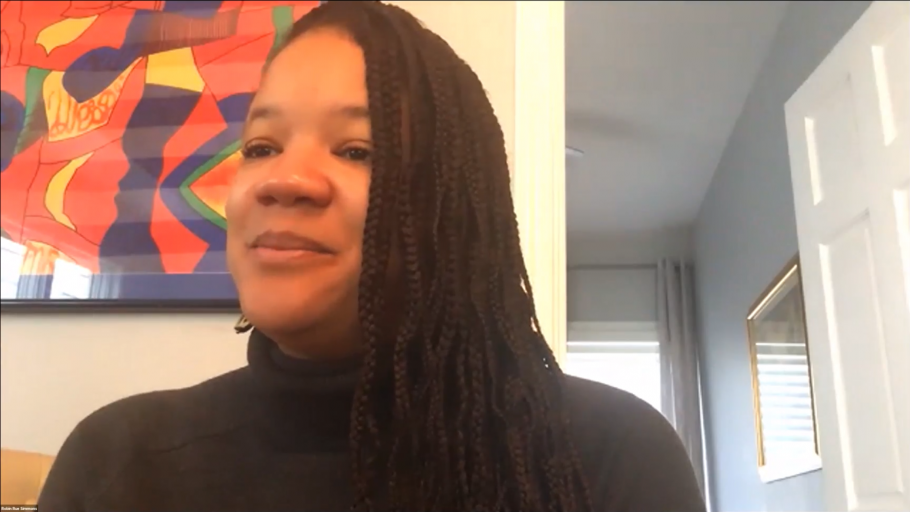 Ald. Robin Rue Simmons chairs a Nov. 20 meeting of the Reparation Subcommittee of the Evanston City Council. (Image via video/City of Evanston)

In July, the subcommittee received the first draft of a 77-page report aimed at demonstrating the basis for reparations, showing historical and present-day instances where the city may have “facilitated, participated, stood neutral, or enacted acts of segregative and discriminatory practices in all aspects of engagement with the Evanston Black community.”

In August, the subcommittee recommended that the city set aside $400,000 from the reparation fund for home ownership. The money, enough for up to 16 applicants, could be used for any cost associated with purchasing a home, improving it or paying down the mortgage.

Reparations payments could be split between multiple such uses and could be layered with other programs. Single-family homes, townhouses and condos would be eligible, but investment properties would not be, according to the version of the proposal presented at the subcommittee’s Nov. 20 meeting.

A new eligibility committee would be formed and tasked with reviewing whether applicants qualify and what evidence of housing discrimination they had provided.

Interim Assistant City Manager Kimberly Richardson said the money would be paid directly to the lending institution at the time of closing, rather than straight to the resident.

“We just want to be very clear, if we give a check directly to an individual, there would be tax implications with that, because unlike the federal government we do not have the ability to waive income tax liability,” Richardson said. “So because of that, giving it to a third party will allow for us to ensure that that individual will not be additionally burdened if their income had been increased due to this funding.”

Conversely, Richardson said the fact that there are no federal dollars involved means there are fewer hoops for residents to jump through as part of the application process.

Ald. Ann Rainey, 8th Ward, is the other alderman that sits on the subcommittee. Noting that the city’s Planning and Development Committee in October rejected an offer of a $100,000 to the fund from Horizon Realty Group, Rainey suggested the subcommittee ask other aldermen to allow developers to count contributions to the reparations fund as part of the “public benefit” requirement for approval from the City Council.

“What difference does it make if a church does it or if a developer does it?” she asked. “This was an enormous contribution that would have been so meaningful. Whether you like the project or not, you can vote against the project but still acknowledge the positivity of contribution for public benefit.”

Longtime civil rights activist Bennett Johnson presented a plan to grow the reparations fund into a sustainable, long-term initiative that would expand beyond the initial plans for housing and economic development. It would include a real estate investment trust to help the home ownership assistance program, a venture capital organization to finance and consult for Black-owned businesses, and a pair of new nonprofit organizations to offer support for education, health care and medical costs.

“I think that the idea of giving $25,000 to an individual — it’s spent and that’s the end of it,” Johnson said. “But if you set up a structure that benefits the people it continues after the money is spent, so we have structures that are ongoing, not over in a year, 10 years, something like that. So that’s the basic concept.”

Citing endorsements from several intellectual leaders from around the county, Johnson said the separate entities should be independent of city officials and controlled by voting trusts consisting of at least 85 percent Black membership. The city should also form a group that would meet quarterly to discuss the historical basis for reparations, he recommended.

“The mission of the truth and reconciliation group is to build trust among white and Black people by revealing the harmful effects of centuries of chattel slavery, segregation and racial discrimination,” Johnson said.

Rainey said she was broadly supportive of all Johnson’s suggestion — other than a real estate investment trust.

“Unless we’re going to invest in buildings that recipients are going to live in or something,” Rainey said. “I’m not seeing how that helps applicants for reparations.”

Johnson said an outside bank would receive the profits when they issue a loan with the support of the city’s reparations program. But with a real estate investment trust with local investors, the money could be kept in the community instead, he said. 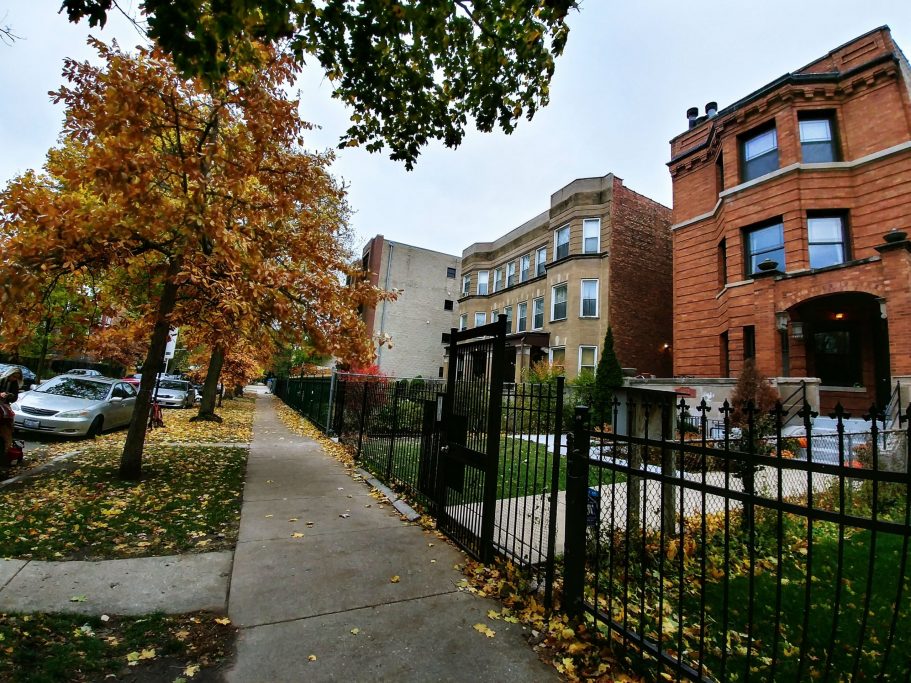 The first phase of Evanston’s reparations program, which is funded by tax revenue from the sale of recreational marijuana, is set to go to promote home ownership in the city’s Black community. Some landlords said it unfairly leaves out renters, owners of investment properties and elderly people. (Shutterstock)

Several attendees at the remote subcommittee meeting expressed concern regarding how many and which Black Evanston residents would be left out of the housing assistance program.

Brenda Greer said it was unfair that the program offered nothing for senior citizens who were alive during the 1960s but who aren’t currently looking to buy or improve their primary residences.

“I don’t see where there’s a program or anything that’s being offered,” Greer said, “for people that really have suffered the discrimination, and that lived during a time that a lot of things were happening that people should really be compensating.”

Meleika Gardner questioned whether reparations payments could be used for business investment and why Black residents who arrived sometime in the past half-century.

“Probably a good portion of Black Evanston is not going to qualify for that $25,000,” Gardner said. “Because many of our families were definitely done wrong, and some of us have been in Evanston since 1970 and on and have contributed — but we’re not going to get anything from this reparations.”

Carlis Sutton shared concerns that the program does not meet the needs of elderly people who live in old homes.

“I think if you’re elderly and you have income property, you should also have access to these funds, since right now as a landlord, I’m under a lot of duress by none of the tenants [being] paying tenants because of the coronavirus 19,” Sutton said. “It’s put us elderly people in a very, very bad situation. So we need some redress also, as far as applying for these loans.”

Tina Paden opposed moving forward with the housing assistance plan until there is more clarity about how many people are eligible so the fund does not run out of money before money can reach those who have suffered the most harm.

“To me, you need the cash payment, and let people do what they want to do,” Paden said. “Reparations is repairing harm, and this is discrimination on discrimination because you’re telling people what to do with their money.”

Paden, a landlord whose family has rented out apartments in Evanston for 50 years, said the program unfairly excludes renters and seniors. She questioned why people as young as 18 should be eligible for support, since if they can afford to buy a house at that age they probably do not need reparations.

Rue Simmons said she disagreed with Paden’s views, which she described as short-sighted, misinformed and somewhat selfish.

“There are many people that are really anticipating this and hopeful that this program works. Some folks have not enjoyed the benefit of home ownership and others have had the privilege of families leaving them dozens of properties so that they can enjoy the benefit of ownership,” she said. “So I’m not in support of stalling.”

The draft proposal is scheduled to head to the City Council for discussion on Dec. 14. The reparations subcommittee is due to meet again Dec. 18. The city is also accepting direct contributions to its reparations fund. City staff said it has collected more than $14,000 so far.