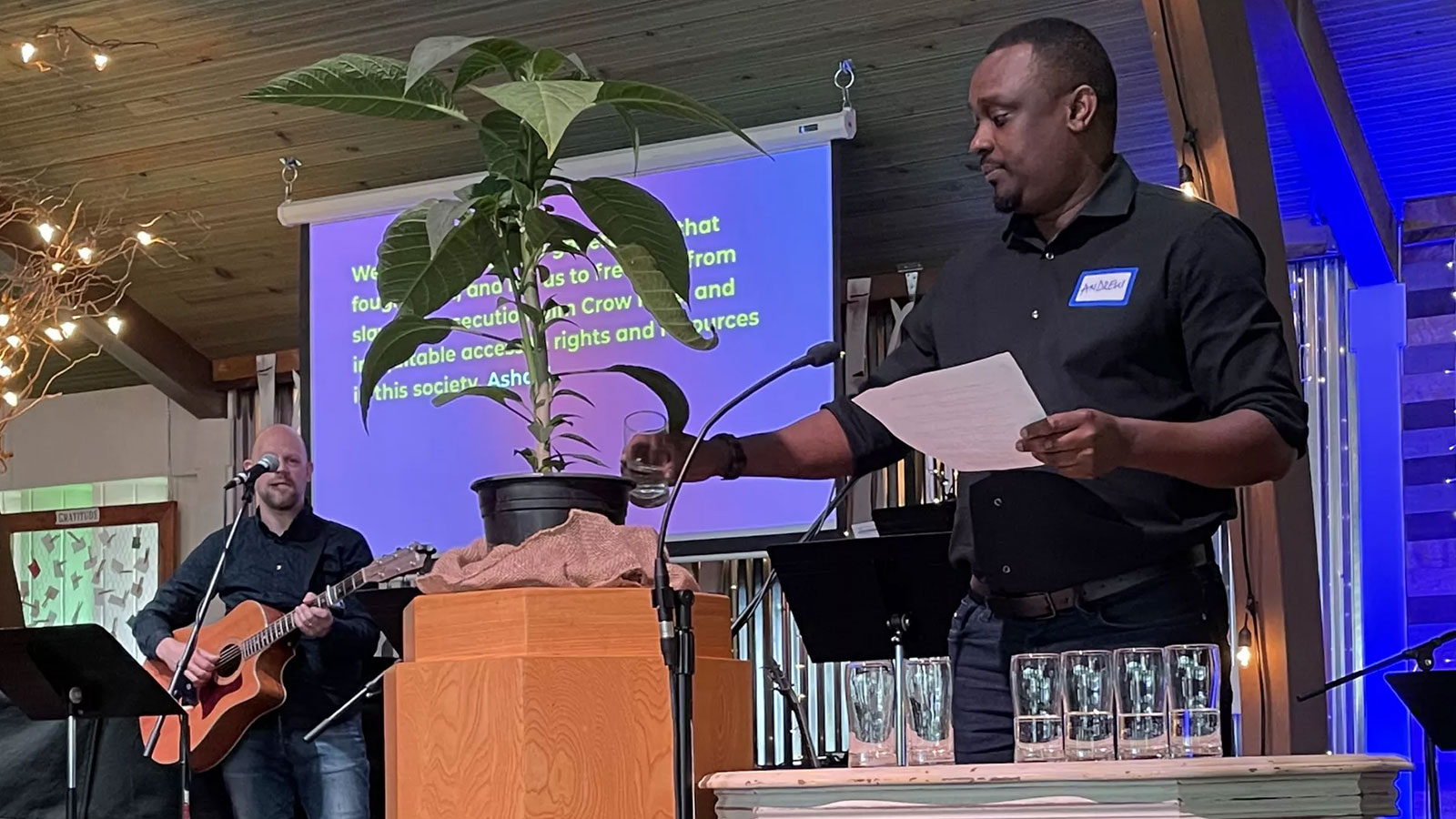 You Are Here: Home » Blog » Reparations » A growing number of religious groups are developing reparations programs for Black Americans

Weary of waiting for the federal government to act on reparations for black Americans, churches and other faith groups have started their own programs. 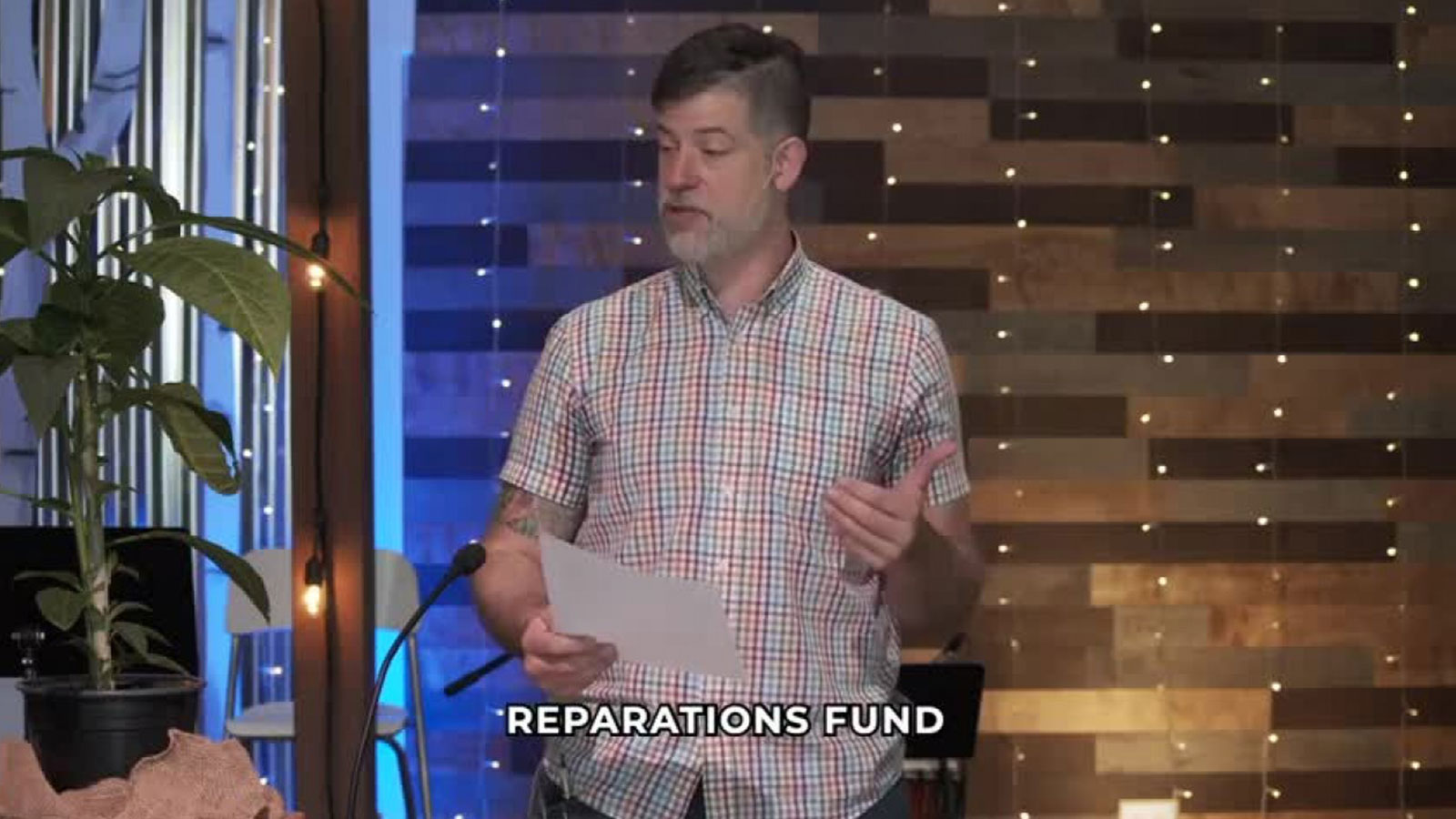 On the Sunday before Juneteenth, the Rev. Ryan Marsh stood in front of about 50 mostly white parishioners to announce a “reparations distribution” program for the church.

The program entails dedicating one percent of the church’s budget – roughly $6,000 – to reparations efforts as well as encouraging parishioners to donate for a reparations fund that distributes money through lotteries held twice a year – on Juneteenth and in December. Applicants can use the money for anything they need.

“The white American church has always been complicit in the evils of white supremacy,” Marsh, of Salt House, told his young Lutheran congregation in the Seattle suburb of Kirkland. “Reconciliation requires both repentance and repair … and the church cannot wait for governments to act justly.”

Weary of waiting for the federal government to take action on reparations for black Americans, a growing number of churches and other faith groups have started reparation programs of their own.

One of the pioneers is Marsh’s Salt House. But others across the country are weighing in also.

The definition of what constitutes reparations varies widely.

Andrew Ndayambaje, a member of Salt House Church in Kirkland, Wash., and part of the church’s reparations committee, participates in a libation ceremony to honor Juneteenth at a June 19 morning service. (Credit: Julia Duin)

In west Baltimore’s Bolton Hill neighborhood, members of Memorial Episcopal Church voted in January 2021 to give five $100,000 grants – coming from its $450,000 endowment plus private donations – over a five-year period to the Guy Hollyday Memorial and Justice Reparations Fund. The money – funneled through a committee named after a late Baltimore city housing inspector – will go toward criminal justice reform, affordable housing, safe drinking water, more urban green spaces, local schools and more jobs for black youth. The church had been discussing the church’s founding – as a memorial to slave owners – since 2017.

The Rev. Grey Maggiano, rector of the parish, said black-led non-profits or black-led organizations are managing the donations. A committee first identifies the projects the church wishes to support and grants of between $5,000 to $15,000 have been given out in the early fall of each year, starting last year. Donors are typically parishioners or community members.

“It’s been extremely positive,” Maggiano said of the response.

In Brookline, Massachusetts, the 300-member United Church of Christ Congregation takes up an offering every time a traditional black spiritual is sung on the the premise that the slaves who composed the hymns never got paid. The money – roughly $12,000 raised since last October – will go to a music program for black youth.

In Denver, the 1,500-member Montview Boulevard Presbyterian Church is starting a similar program this fall, paying out roughly $500 each time a spiritual is featured during a worship service.

Adam Waite, its music minister, estimates about $5,000 per year will be raised.
“We will dialogue with local black musicians as to where the money should go,” he said. “We hope it’s a natural relationship, more than a grant process where you just make out a check.”

Waite shared the idea with the Washington, DC-based Center for Congregational Song, which now has a “reparations royalty pilot” on its site that the center says has attracted interest from 20 congregations, including Presbyterian, United Church of Christ, Lutheran, Unitarian Universalist, Moravian, and Mennonite churches.

One of the project’s stated goals is to provide “majority white congregations’ music ministries an opportunity to ‘put their money where their mouth is’ concerning racial justice in the U.S.”

“They should be applauded for their sense of moral/spiritual responsibility to
proactively address the living legacies of slavery, America’s ‘original sin,’ ” he said.

Some organizations keep their reparations in-house. The Seattle-based Evangelical Lutheran Church of America’s Northwest Washington Synod, which oversees Salt House and 108 other congregations, has set up a reparations fund for retired black ELCA clergy. About $28,000 has been given out over the past two years to a dozen recipients.

Salt House, which has had two reparations distributions totaling $7,000, gives to whomever asks. The money has gone to more than a dozen recipients for medical bills, housing, business start-up expenses and other needs.

“Being a person of color myself, I was thrilled to hear of Salt House’s reparation fund,” said Andrew Ndayambaje, one of the members of a committee that decided disbursements. ” I knew this would help cover economic inequality.” 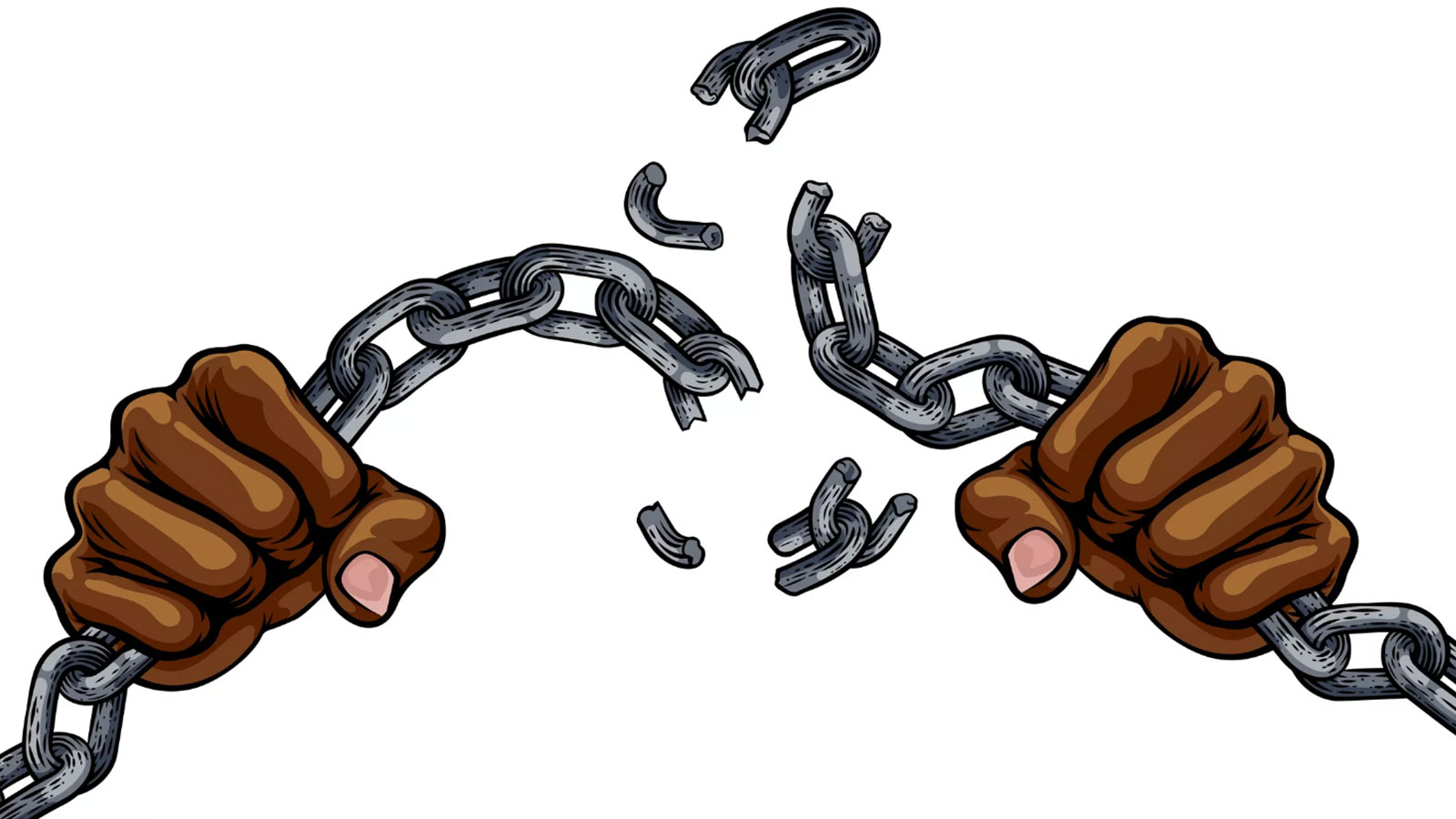 Reparations for centuries of black slavery is a concept first introduced after the Civil War but never implemented. Nearly two centuries later, churches and other faith groups are giving out reparations on their own. (Getty Images)

Marsh said his congregation decided early on to put money directly into the hands of local individuals and families rather than routing it through organizations.

The inspiration for Salt House’s reparations program was historian Jemar Tisby’s 2020 book “The Color of Compromise: The Truth about the American Church’s Complicity in Racism.”

“The repair is what matters,” Marsh said. “The reason is generational harm, and this money is a reparation.”

In an email interview, Tisby told Newsweek the federal government should be the primary source of reparations funding, but Christian institutions that directly benefited from slavery should pay up as well. Those that did not benefit from slavery can voluntarily do reparations “as a way of loving and serving their neighbors of African descent.”

He added, “Christian churches and denominations also played a massive role in the creation and perpetuation of race-based chattel slavery – through their theology, their proslavery political and social positions, and their inaction, Christians are complicit in racism, too.”

The injustice done “has not been repaired,” he wrote. “The only question for Christians and churches is whether they will be part of the solution or continually ignore the harm.”

The idea of reparations has been around since the Civil War, when the idea arose that blacks should be paid back for their unpaid work over the centuries and to even out racial inequities in housing, education and business ownership.

Despite reparations having been paid to Japanese and Native Americans over historical wrongs, there never has been a federally sanctioned system of reparations for blacks. Union General William T. Sherman did decree that 400,000 acres of confiscated Confederate land would go to former slaves – along with some leftover Army mules – in a policy dubbed “40 acres and a mule.” However, President Andrew Johnson rescinded the order several years later.

The cause simmered for more than a century with the religious community caught in the middle. In April 1969, civil rights activist James Forman compiled the “Black Manifesto;” a list of demands that included a call for “Christian white churches and Jewish synagogues” to pay $500 million in reparations to black Americans.

A month later on May 4, 1969, Forman interrupted a service at the Riverside Church in New York City by walking to the front of the mostly white congregation to present the manifesto. His words were drowned out by the church organist, who played on while most of the clergy and congregation walked out.

The following September, on the Jewish holy day of Yom Kippur, representatives of the Black United Front showed up at B’Nai Israel Congregation in Washington, D.C. to demand $10 million and for “the Jewish church to shake off the shackles of white racism and capitalist exploitation that have strangled its Christian vision.” (They arrived too late in the day to meet any members, so were reduced to reading out their demand to the synagogue janitor).

What changed religious attitudes may have been videos of the May 25, 2020, murder of George Floyd, an unarmed black man, by a white policeman and the nationwide demonstrations and riots that ensued. In 2021, the Jesuit Conference of Canada and the United States announced it would raise $100 million to benefit the descendants of slaves. Several Episcopal dioceses, including in Texas, Maryland and New York, have also announced millions of dollars in grants.

Meanwhile, individual congregations were wondering what they could do. When the city of Evanston, Illinois, decided to establish a reparations fund with money to go toward better housing for blacks, some 100 members of First United Methodist Church donated $50,000. The 669-member mostly white church has a black pastor, the Rev. Grace Imathiu, who has prioritized discussions about racism. One of her lay leaders, Matthew Johnson, said 70 members have already raised $20,000 to donate this year.

“The [federal] government hasn’t done anything yet,” Johnson said, “so we need to do something at the grassroots level to give what is owed to past and future generations of people harmed by slavery in our country.”

This past June, 16 congregations – including a Buddhist council, three synagogues, Baha’is and various Christian denominations – announced a consortium to contribute to the city’s fund and cited the Black Manifesto as one of their inspirations.

“No amount of money could adequately compensate for 400 years of systemic subjugation,” a joint statement said. “Reparations first focuses on formally acknowledging collective responsibility for past wrongs and their continuing effects.” 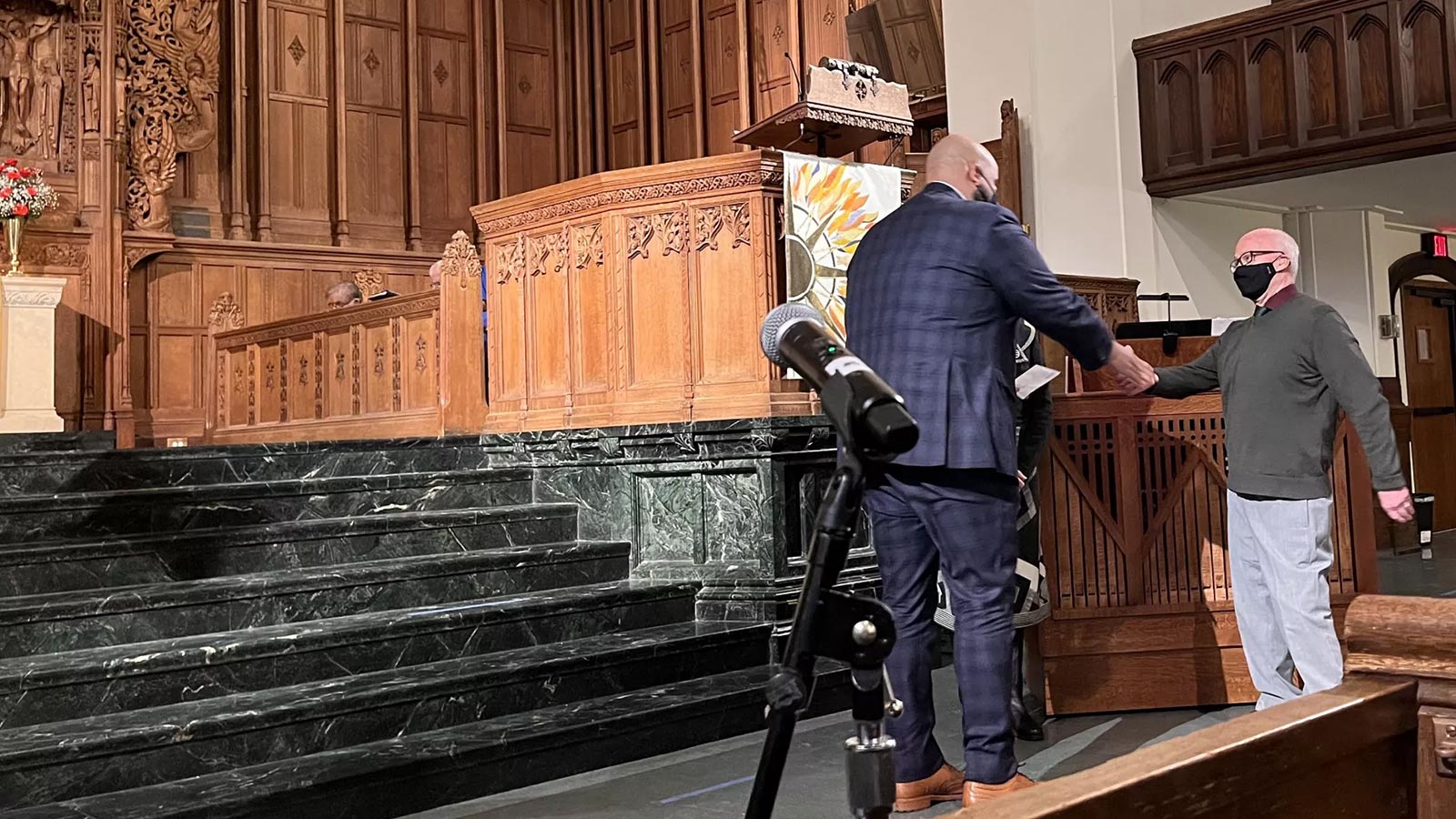 Not everyone is taken with the idea of religious reparations. Woullard Lett, of the National Coalition of Blacks for Reparations in America (N’COBRA), said payments such as the interfaith effort in Evanston are “insufficient to repair the harm inflicted on African chattel and enslavement and its ongoing vestiges.”

What’s needed, he said in an interview, is not only compensation, but a more expansive effort that involves rehabilitation for those injured and restoration of all that was originally lost.

“To know the remedy, you have to understand the injury,” he said. “It’s not a broken labor contract, it’s a broken covenant among the human family. That is part of the role of the church. They can play their role in promoting remedies.”

But many churches have refused to do so.

“We see the influence of the evangelical Right on legislation,” Lett continued, “but when it comes to addressing injuries for African people, what do they do? Throw up their hands and pass the plate around.”

But even the most conservative denominations may be moving on this issue. The majority-white Highland Baptist Church in Louisville, Kentucky, has spent 18 months researching reparations. It plans to create a reparations fund that reparations task force chair Nancy Goodhue hopes will include 1 percent of the church’s budget or about $10,000. Money would go toward organizations supporting better education, housing and job opportunities for blacks.

“We hope to find other congregations doing this and support each other and fan up a grassroots movement to do reparations,” Goodhue said. “It’s ambitious, but we’ve got to do something.

“Doing this work is justice, it’s deeper and it’s hard. You have to look at what harm has been done. We haven’t been the best of people. This work needs to happen if our nation is going to change.”