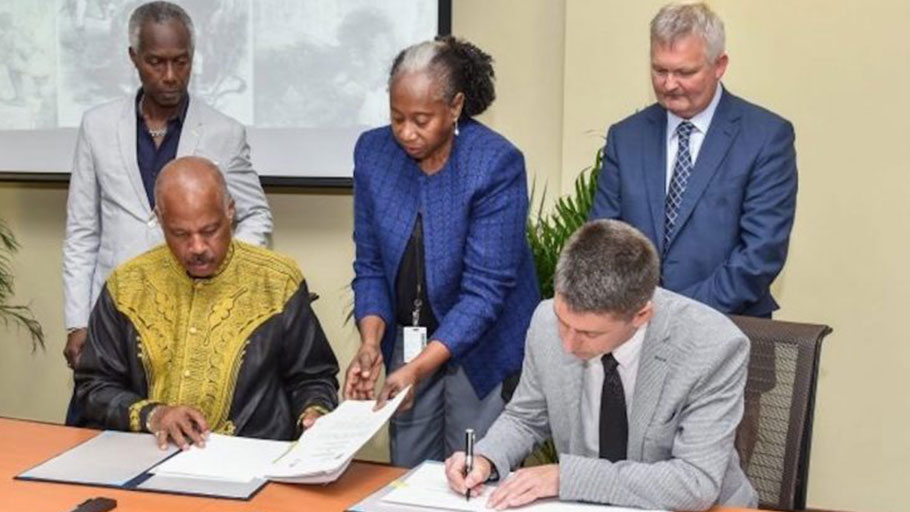 Sir Hilary Beckles, Vice-Chancellor of the UWI (left seated) and officials of the University of Glasgow sign historic reparations agreement in Jamaica.

The historic Glasgow-Caribbean Centre for Development Research, a joint initiative of The University of the West Indies (The UWI) and the University of Glasgow, has begun its work. It is the first institution within British University history, dedicated to the slavery reparations policy framework.

The Centre’s Board of Directors met at The UWI Cave Hill Campus in Barbados on December 18, 2019. Co-chaired by Professor Simon Anderson, distinguished Jamaican scientist who is Director of the George Alleyne Chronic Disease Research Centre at The UWI Cave Hill Campus and the accomplished Professor William Cushley from Glasgow University, the Board also consists of six senior persons from each university including the co-chairs. The UWI directors are Pro Vice-Chancellors Stefan Gift and Clive Landis as well as Dr Sonjah Stanley Niaah, Professor Verene Shepherd, and Vice-Chancellor Professor Sir Hilary Beckles.

The purpose of the inaugural meeting was to rollout the research and project development agenda for the Centre which is aimed at confronting and eradicating the debilitating legacies of slavery and colonisation in the Caribbean. Professor Sir Hilary Beckles joined Professor Simon Anderson in welcoming board members to Cave Hill, where the Centre will be hosted.

It was agreed that the Centre’s activities in its first ten-year phase will focus on three pillars:

In addition to project development and applied research, there is also funding available for relevant reparations oriented teaching programmes. The seed budget of £20 million to be used over two decades to develop the work was discussed alongside other fundraising strategies. Research proposals were also established, and joint subcommittees will begin planning for projects.

Professor Anderson expressed his delight as co-Chair to begin this historic journey bringing together the two university worlds within a reparatory justice framework. Professor Cushley underscored the enormous significance that this initiative has for the world today, particularly universities that consider themselves ethical in the pursuit of excellence. Vice-Chancellor Beckles commended the team for their positive and progressive thinking and actions.

The next meeting is expected to take place in the first quarter of 2020.

This article was originally published by Barbados Today.