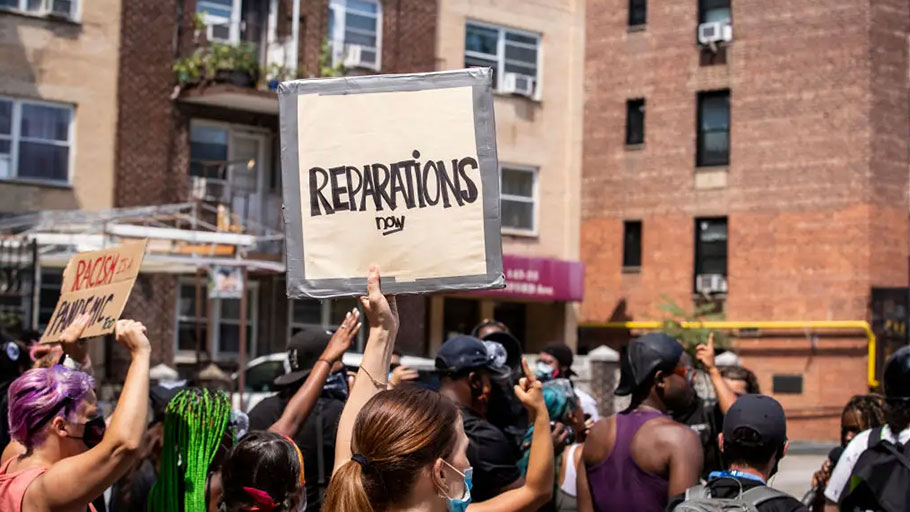 How white and non-Black people can pay reparations, even if Congress never figures it out

You Are Here: Home » Blog » Reparations » How white and non-Black people can pay reparations, even if Congress never figures it out

The murders of George Floyd, Breonna Taylor, Tony McDade, and countless other Black individuals at the hands of police have reignited the Black Lives Matter movement, and with it, a renewed interest in reparations for Black Americans in the United States.

Reparations for Black Americans have been a debated topic for well over a century, and they have often been deemed unnecessary or too radical a concept. While politicians create task forces and bills to study reparations, Black and brown community organizers and activists are working at the local level to turn reparations from an idea into real assistance right now for the Black community and its most vulnerable members.

The broken promise of ’40 acres and a mule’

Many Black Americans are familiar with the phrase “40 acres and mule” and its promise of Black livelihood. In 1865, the US government, as part of Special Field Order No. 15, promised 40 acres of land (and later a mule) to formerly enslaved Black people. However, the order was overturned by President Andrew Johnson in the fall of 1865, and the 400,000 acres of land meant to be redistributed were returned to their white, Southern owners, extinguishing the hope that future generations of Black Americans might know generational wealth and prosperity.

The effects of this broken promise are still felt today, as the racial wealth gap continues to widen at an alarming rate. The Brookings Institution reports that the average white family enjoys a net worth that is almost 10 times more than the average Black family, while research conducted by author and scholar Chuck Collins estimates that the median wealth of a white household is closer to 41 times more than that of a Black household. And the most marginalized individuals within the Black community, including LGBTQ+ or disabled individuals, experience even less financial security and access to resources.

This is why reparations matter. And while we might never see reparations from the federal government, mutual aid efforts and direct giving by white and non-Black people may be the closest we’ll ever get.

How interpersonal ‘reparations’ can begin to redistribute wealth

Recently, we’ve seen the emergence online of reparations groups, mutual aid funds, and even social media threads where Black people can drop their payment handles and receive funds or non-cash assistance, like rides to work or groceries. These efforts seek to redistribute wealth or resources directly from white and non-Black people, and come at a time when Black people navigate COVID-19-related losses and racial trauma.

According to Jingle H., a community organizer and member of Housing Reparations Philly, this kind of person-to-person giving can go a long way towards wealth redistribution. (Jingle, who uses they/them pronouns, requested that we use their last initial only due to the sensitive nature of their work.)

“Black queer and trans, marginalized genders, femmes, sex workers, darker-skinned, fatter, hood, poor, different-abled, and other folks with less proximity to whiteness are affected by the harms of oppression at a higher and deeper capacity,” says Jingle. “Whites and non-Black people can start by listening to these groups, then construct and execute plans to turn over all wealth and resources that have been gained by way of systematic oppression.”

While support for the Black Lives Matter movement surged after the murder of George Floyd, that support has dwindled in recent months, according to a report by the Pew Research Center. There were countless social media posts on how to be an ally to Black people, and white and non-Black public figures and everyday people declared their solidarity, giving to mutual aid funds and social justice organizations.

Now, though, that momentum has come to a halt. State-sanctioned violence against Black lives and systemic racism have persisted for centuries, and performative allyship — or brief support for the Black community — cannot heal centuries of harm. Support must continue for real change to occur.

Interpersonal reparations can take many forms. Says Jingle, “Some examples include: covering health care, transportation, and education costs; helping Black people secure housing by being a cosigner; paying their rent/mortgage; buying land for Black folks; moving out of historically Black neighborhoods; and helping Black people pay down their debt.”

White and non-Black people who aren’t in a financial position to do any of the above can consider other ways to use your privilege or resources.

Jingle suggests that white and non-Black people use their power to uplift and center Black and Indigenous people by sharing their skills, access to resources, and their platforms. In practice, this can look like:

It’s also important that white and non-Black people acknowledge their privilege and discuss anti-Black racism with each other, rather than expecting Black people to perform free labor in order to educate them on it.

Be intentional and consistent in your commitment to reparations, and create a real plan that will allow you to give your time, money, or access to help support Black lives.

Reparations groups and mutual aid organizations are imagining a future in which Black and Indigenous people have access to safe and secure housing, quality education, nourishing food, and other resources that have been readily available to white people for so long.

Back in 1865, the “40 acres and a mule” proposal was radical for its time, and though it was included in a decree written by a white man, it was an idea borne out of talks with Black community leaders. Today, Black community leaders are continuing the legacy of dreaming up and articulating what a future with Black equity looks like — a future that includes reparations.

But until that day comes, if it comes at all, community care and a real willingness from white and non-Black POC to give to reparations efforts, to support and defend all Black people, to center the most marginalized among us, and to give up their power, might be the path to giving Black people what has long been owed.