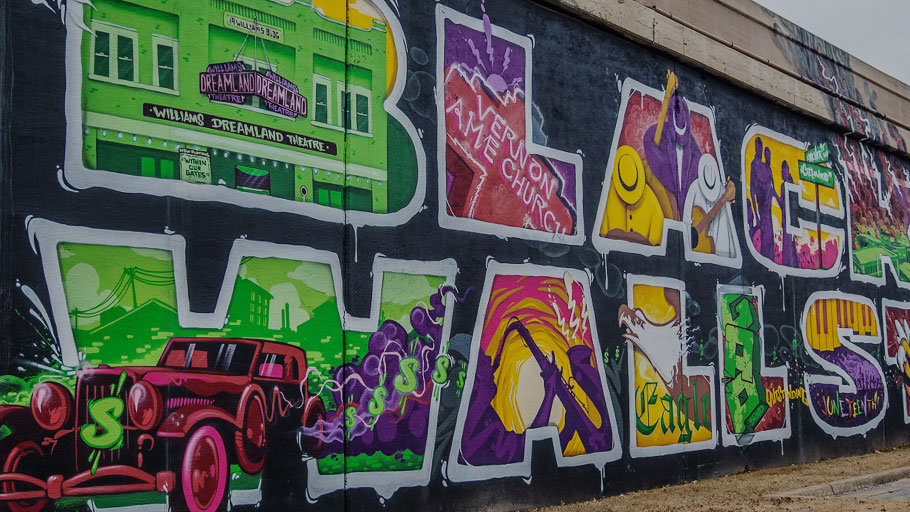 The Black Wall Street mural in Tulsa, Okla., commemorates the 1921 riot by whites who burned and looted the Black neighborhood of Greenwood, a uniquely wealthy district that was known at the time as the Black Wall Street. Today, the typical Black family has only an eighth of the wealth of a typical white family.

Philanthropy as usual isn’t enough to confront a racial wealth gap that’s exploding during the pandemic.

As the coronavirus rages and the economic fallout continues, the wealth gap between our country’s largely white top 1% and the Black and brown communities bearing the brunt of the pandemic has never been more exposed.

U.S. billionaires have increased their wealth by nearly $1 trillion during the pandemic. These billionaires now own three-quarters as much as all Black wealth in this country combined—and more than all 59 million U.S. Latinos combined.

In the absence of real wealth distribution, the wealthiest American have often used philanthropic giving to bandage the wound of this deep inequality. But philanthropy is by and large failing to meet the transformative demands of the era.

Bill Gates and Warren Buffett’s Giving Pledge is emblematic. A decade ago, when they announced that they would give away at least half their wealth to charity and urged other billionaires to join them, many considered it revolutionary.
In the time since, we’ve seen that grand promises like these are simply not enough.

As a group, these original Giving Pledgers have actually seen their wealth double. And much of what they’ve given to “charity” has failed to reach the organizations doing the crucial work on the front lines. Instead, most is funneled toward private family foundations and warehoused in donor-advised funds with little to no payout requirements.

Now, as the wealth gap in the United States has been supercharged by the COVID pandemic, we must ask what role the ultrarich should play to address it. High-level philanthropy like the Giving Pledge has proven wholly insufficient to address the scale of wealth redistribution we need.

It’s time for a new kind of promise: A Reparations Pledge.

The movement for reparations has gained traction in Congress and cities across the country in the wake of uprisings for racial justice. At the core, reparations are about restoring balance to society—returning resources to those from whom they were taken.

Philanthropists need to start by acknowledging that their own opportunities to build generational wealth derive from situations that robbed communities of color of the same chance.

This type of acknowledgment is not unprecedented. In late July, when billionaire MacKenzie Scott announced $1.7 billion in donations to social change organizations, she acknowledged that “anyone’s personal wealth is the product of a collective effort, and of social structures which present opportunities to some people, and obstacles to countless others.”

Recognizing the inequitable source of wealth is just the start. To address racial inequality, the billionaire class must take up wealth redistribution as a mandate, driving wealth back into communities of color from which it was taken.

That starts with turning over control to those communities. In family foundations, it’s customary for family members—typically wealthy and white—to run decision-making. By bringing on board members from Black and brown communities, foundations cannot only hand back decision-making power to these communities, but also ensure that wealth is being diverted to where it can correct this historical imbalance.

A great example of this is the Hill-Snowdon Foundation, which recently announced it would add “community trustees”—community and social justice leaders of color—to fill three of their seven board positions, previously all occupied by family members.

But ultimately, we must explore more radical ways to shift wealth and power to communities that can use them in a self-determined way.

A powerful next step any philanthropic institution can take is to transfer 10% of its assets to a trust fund led by indigenous and Black Americans—no questions asked. That’s the operating principle of Liberated Capital, a philanthropic initiative founded by the Decolonizing Wealth Project that raises funds to support projects led by people of color and is directed by members from those same communities.

Finally, the only way to ensure that this wealth is being fully redistributed is to make transparency nonnegotiable. Instead of letting billionaire donors operate on their own terms, we need donors to fully open their ledgers so we can hold them publicly accountable.

This might sound far-fetched, but it’s already happening: In April, Twitter’s TWTR, 3.87% Jack Dorsey pledged to fund COVID-19 relief efforts and other causes with $1 billion—and placed every donation in a Google spreadsheet anyone can see. In a Reparations Pledge, this would be the baseline expectation.

Ten years after the Giving Pledge began, we know that philanthropy as usual is insufficient to address the crises at hand. With the pandemic and its economic fallout disproportionately wreaking havoc on communities of color, we can no longer afford to wait.

While a consciousness around charitable giving has grown within the billionaire class, the movement for racial justice doesn’t need more charity—it demands nothing less than reparations right now.

Edgar Villanueva is the author of “Decolonizing Wealth: Indigenous Wisdom to Heal Divides and Restore Balance” and the founder of Liberated Capital, a philanthropic initiative. Chuck Collins directs the Program on Inequality at the Institute for Policy Studies and co-wrote the IPS reports White Supremacy Is the Pre-existing Condition and Gilded Giving 2020: How Wealth Inequality Distorts Philanthropy and Imperils Democracy.