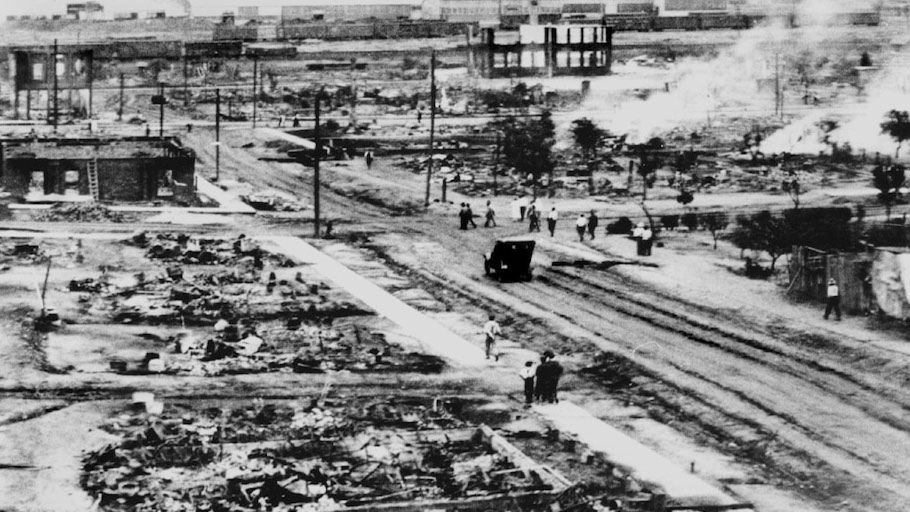 The aftermath of the 1921 Tulsa Race Massacre (Greenwood Cultural Center)

On the eve of the 99th anniversary of the 1921 Tulsa Race Massacre, Human Rights Watch released a report Friday demanding reparations for survivors and descendants of the violence, which left hundreds of black people dead and blocks smoldering.

“No one has ever been held responsible for these crimes, the impacts of which black Tulsans still feel today,” says the report, titled “The Case for Reparations in Tulsa, Oklahoma: A Human Rights Argument.” “Efforts to secure justice in the courts have failed due to the statute of limitations. Ongoing racial segregation, discriminatory policies, and structural racism have left black Tulsans, particularly those living in North Tulsa, with a lower quality of life and fewer opportunities.”

Human Rights Watch argued that beyond the physical destruction, the state and city government created polices of structural racism that kept black people in Tulsa from prospering. The lingering economic impact of the massacre can be seen today in the high poverty rates and lower life expectancies in North Tulsa.

“Generations of black Tulsans, especially massacre survivors and their descendants, have endured cumulative economic and moral losses and an inescapable cycle of pain,” said Dreisen Heath, the U.S. program advocacy officer at Human Rights Watch and author of the report. “Reparations are the right thing to do, and the city of Tulsa and state of Oklahoma have the power to repair a century of harm.”

A spokesperson for Tulsa’s mayor, G.T. Bynum (R), said the mayor had not seen the report and could not comment.

In January, Bynum told The Washington Post he believed the city should address the issue of reparations after the city completes its investigation into mass graves. It was preparing to dig when the coronavirus pandemic put the search for mass graves on hold.

The massacre — one of the worst incidents of racial violence in U.S. history — began on May 31, 1921, when a white mob descended on Greenwood, an African American community so prosperous it was called Black Wall Street. Over the next 48 hours, historians believe as many as 300 black people were killed and more than 10,000 were left homeless, after businesses and homes were burned to the ground. There were reports of airplanes flying above Greenwood and dropping kerosene bombs.

Witnesses recounted seeing white mobs looting the homes of black people and setting the houses on fire. “They tried to kill all the black folks they could see,” a survivor, George Monroe, recalled.

Some said bodies were thrown into the Arkansas River or buried in mass graves.

On June 1, 1921, martial law was declared. Troops rounded up black survivors and detained them in camps throughout the city.

“Government officials committed no public money to help Greenwood rebuild,” Human Rights Watch reported. “Rather, they impeded rebuilding, even rejecting offers of medical and reconstruction assistance from within and outside Tulsa.”

The case seemed closed until 2018, when Bynum announced the city would reopen an investigation into the possibility of mass graves. In October, scientists and forensic anthropologists armed with ground-penetrating radar began scanning the grounds of Tulsa’s Oaklawn Cemetery. In December, a team of forensic anthropologists and archaeologists, led by the Oklahoma Archaeological Survey at the University of Oklahoma, announced that they found “possible common graves” at two sites in Tulsa.

The city was scheduled to begin digging at Oaklawn Cemetery in April, but the excavation was postponed by the covid-19 pandemic. Officials said they will reschedule the dig when it is safe for scientists to travel. 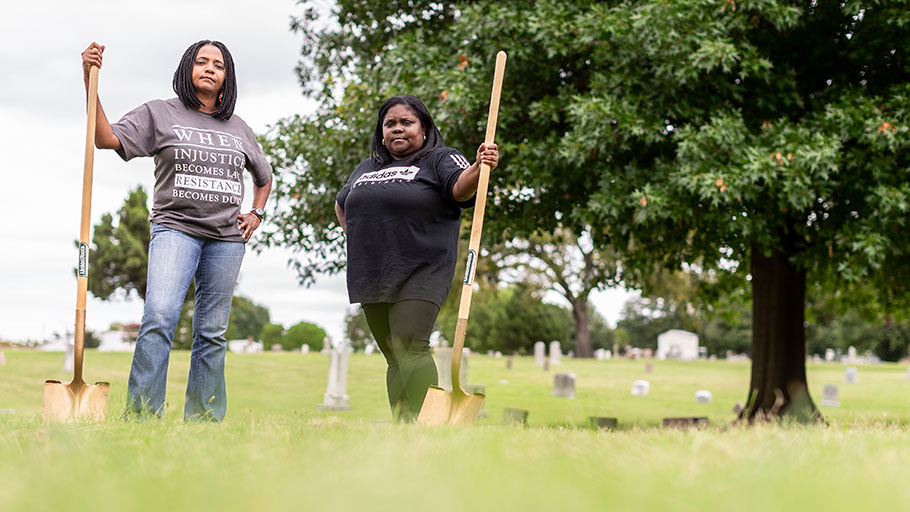 Tulsa City Councilor Vanessa Hall-Harper and local activist Kristi Williams at Oaklawn Cemetery, where the city will dig for a possible mass grave from the 1921 Race Massacre. (Shane Bevel for The Washington Post)

On Sunday, the 99th anniversary of the massacre, activists and community and civil rights leaders are set to begin a series of virtual forums titled “Their Blood Cries Out,” in which panelists will talk about reparations and racial justice.

Kristi Williams, a community activist in Tulsa, said she believes reparations are past due. “We lost homes, businesses and lives,” Williams said. “We need to be compensated because it is time for us to build from what our ancestors left us. And their blood has been crying out for a long time.”

The Rev. Robert Turner, pastor of the historic Vernon AME Church where black people hid during the massacre, said, “Reparations should look like justice. Nothing has been done as far as slavery from 1619, and nothing has been done in regards to the worst race massacre in American history. Meanwhile, we have compensated other parts of this state for mass terror — the Oklahoma City bombing. Yet Greenwood, the first site of an aerial bombing terrorism in this country, has not received a dime.”

In 2005, the U.S. Supreme Court dismissed without comment a lawsuit against Tulsa, its police department and the state of Oklahoma, demanding reparations. Survivors — many of them in their 90s — stood on the steps of the Supreme Court utterly crestfallen, having hoped for justice before they died.

Otis G. Clark, who was 18 when the mob burned down his home during the massacre, explained his loss. “Family and friends missing. Jobs gone,” Clark said in an interview before he died in 2012. “The city took my grandmother’s land and didn’t give us nothing in return. We suffered. But Tulsa has given us nothing … even to this day — nothing.”