‘Knowledge, not money, best form of reparation for colonial rule’

You Are Here: Home » Reparations » ‘Knowledge, not money, best form of reparation for colonial rule’ 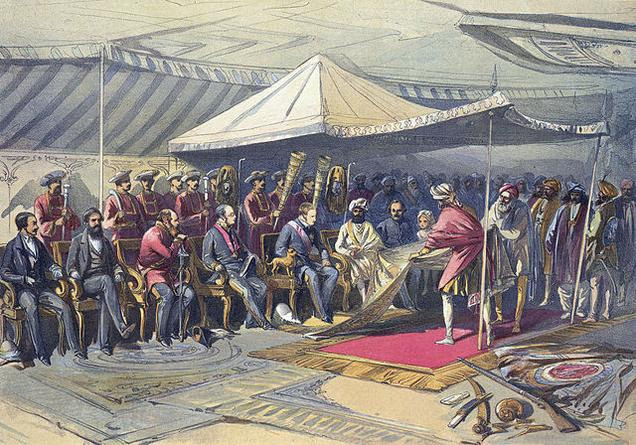 By Parvathi Menon (The Hindu)

Reparations by Britain to India for the injustices of colonial rule is a fair demand but must take forms other than financial, a group of writers and historians speaking at the 2016 Jaipur Literary Festival held at the South Bank argued.

Speaking at a session chaired by writer William Dalrymple, authors Ferdinand Mount (Tears of the Rajas) and Nick Robins (The Corporation that Changed the World: How the East India Company Shaped the Modern Multinational) elaborated on the role of the colonial state as represented in their books.

“Knowledge is the best form of reparation. We should rehabilitate something of the respect that is due in restoring the understanding of the economic system and the remarkable commerce, the culture and heritage that lay beneath all the colonial prancing,” Mr. Mount said.

Mr. Mount’s book is an unapologetic account of their ancestors, the Lows of Clatto, a family that spent a century serving the colonial state, and participated in the battles and killings of the 1857 Mutiny of Indian troops against the East India Company. (The writer disclosed at the start of the session that he shared his family’s history with British Prime Minister David Cameron to whom he is related on his mother’s side.)

Mr. Cameron ruled out reparations to Nigeria for slavery during a visit to the country in 2015, a sore rejection for the descendents of those who still suffer the consequences of slavery’s historical impact of subjugation.

Could appropriate statuary be a way of symbolic atonement for colonialism’s misdeeds? “Why doesn’t the British government erect a statue to the unknown Indian peasant, who suffered the harsh impact of British taxation, opposite that of Robert Clive that stands in Whitehall?” Nick Robins asked. Robert Clive, a famous though controversial 19th century colonial administrator, was known to be the foremost of the robber barons, a class that bought power in England from the proceeds of their plunder in India. His statue stands uncontested in the heart of Whitehall, the seat of the government in London.

Yet another speaker suggested the writing-off of the debt of African nations as a practical way of reparations for the historic abuses slavery could be made by former colonial nations.

Speakers at the session also drew attention to the whitewashing of the colonial enterprise in the way history is taught in British schools. “The British empire does not figure on the syllabus in textbooks,” Mr. Dalrymple said. “British children read about the Tudors, Stuarts, and then about Hitler. The role played by the British in between is left out.”

In sessions that raised contemporary questions deriving from recent fictional and non-fictional writing on India, JLF saw lively and provocative participation from a cross section of south Asians based in the UK.

In a session on the lessons of the 1947 partition, a mass displacement that still casts it shadow over the subcontinent, Indian High Commissioner Navtej Sarna, himself a writer and novelist, read a short story he had translated into English written by his father in Punjabi. A session on Women Writing War, authors Shrabani Basu (For the King and Another Country: Indian Soldiers on the Western Front 1914-1918 and Spy Princess: The Life of Noor Inayat Khan), Alex von Tunzelman (Indian Summer and Blood and Sand), and Yasmin Khan (The Great Partition and The Raj at War) rejected the idea that a particular feminine sensibility drew them to their subjects, or that it shaped the way they developed their perspective.

“What drew me was curiosity about the lives and thoughts of the men who left their shores to fight in an unknown land,” said Shrabani Basu.

Message of Solidarity to the Guyana Reparations Committee from Prof. Sir Hilary Beckles, Chair of the CARICOM Reparations Commission and Vice Chancellor of the University of the West Indies.

Message of Solidarity to the Guyana Reparations Committee from Prof. Sir Hilary Beckles, Chair of the CARICOM Reparations Commission and Vice Chancellor of the University of the West Indies.
We Need Your Support — Donate, Share, Sign-Up Ways to Support