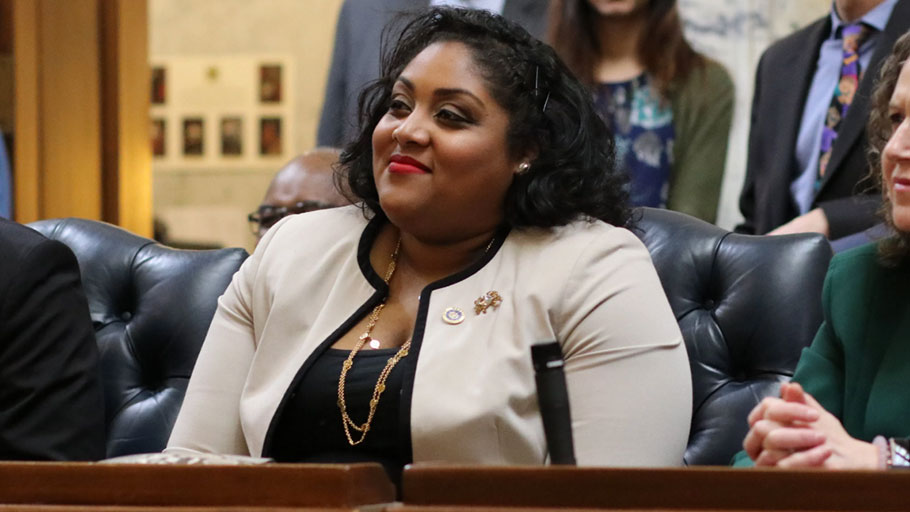 Lawmaker Wants to Open a Dialogue About Reparations in Md.

You Are Here: Home » Blog » Reparations » Lawmaker Wants to Open a Dialogue About Reparations in Md.

Maryland’s 250-year history of legal slavery came to an end when the practice was abolished on Nov. 1, 1864, nearly a year before the 13th Amendment to the Constitution was ratified.

Del. Wanika B. Fisher (D-Prince George’s) says it’s finally time for Maryland lawmakers to have a talk about how to move forward.

“It’s been 155 years and we haven’t addressed it, and I think if we keep going we’re never going to address it, and it continues to be something that’s impossible,” she said.

Fisher is sponsoring a bill this session that would look into the possibility of distributing reparations — financial compensation for the descendants of enslaved Africans. She believes such legislation could get to the root of a lot of the state’s inequities.

“It’s my first term in office, and a lot of the issues that we talk about — whether it’s Kirwan [education reform], whether it’s criminal justice reform — sometimes it can just seem like symptoms of the real illness, which is systematic racism and injustice and slavery,” Fisher said.

The legislation, if enacted, would create the Maryland Reparations Commission, comprised of a group of governor-designated appointees, the state archivist and representatives from organizations like the Maryland Historical Society and the NAACP, among others.

The bill would mandate that a fund be created by the state and its institutions that have benefited from the labor of enslaved Africans to compensate modern-day Marylanders upon the receipt of an application that supplies adequate proof that they are the descendants of Maryland-based slaves.

In short, if black people in the state can demonstrate to the commission through historical evidence that they are a descendant of a slave who worked on a Maryland-specific plantation, they may qualify for things like free in-state college tuition and low-interest rates for loans and mortgages; if applicants can provide concrete proof of how many years of forced labor their ancestor endured they may be eligible to receive back pay for that person’s lost wages.

“This bill’s attempt is to address the cancer — to address the illness of the core — which is systematic racism in the form of slavery that has put the black diaspora in an economic, political and social disadvantage for far too long,” Fisher said.

As the bill is written, black Marylanders whose ancestors toiled in other states or U.S. territories would not be eligible for reparations payments from the state. But Fisher said she is open to amendments to the bill.

The legislation is being introduced during a particularly momentous session, with Del. Adrienne A. Jones (D-Baltimore County) serving as the first African American speaker in the history of Maryland’s House of Delegates. Fisher notes that it is also being dropped at the beginning of Black History Month and just a few days ahead of the grand unveiling of State House statues of Harriet Tubman and Frederick Douglass, scheduled for Monday.

“We’re Maryland,” Fisher said. “We’re the state … of one of the main players of the Underground Railroad. If we don’t talk about reparations, with one of the biggest Black Caucuses in the country, who is talking about it?”

Del. Gabriel Acevero (D-Montgomery), a co-sponsor of the bill, said that it’s important that it’s introduced in Maryland because of the state’s history, pointing to the 1638 Maryland Doctrine of Exclusion which said that no one of African descent is to benefit from white civilization. Acevero said that other colonies looked to Maryland’s model and followed suit.

“We cannot deny the injustices that were committed against black Americans, and this is our opportunity to not just wrestle with that history, but also to commit to the kind of policies and actions that would make our state more equitable for the descendants of enslaved African people.” he said.

Fisher called the proposed bill “a discussion.” She conceded that it may take many sessions to pass the bill.

“I want it to pass, but I also know that there are bigger minds and resources that should go into really studying it so that we do it right,” she said.

“I think it takes courage to put in a bill for reparations that, you know, so many black folks have been left out of the equation on,” Barnes said. “I think now’s the right time.”

Charkoudian said that she signed onto this bill because it’s time to acknowledge the centuries’ worth of oppression that slavery has left in its wake.

“While there’s a lot of different … reasonable range of opinions about how reparations ought to happen, I think that it’s really crucial that we take that issue on and look our history square in the face and figure out how to repair that harm,” she said.

Fisher is expecting lawmakers across races to support the bill because “injustice is injustice,” and people of color are represented across all of the state’s districts.

“In Maryland and in our nation there’s huge cracks in our democracy — in our foundation. There are huge cracks, and slavery is a huge crack,” Fisher said.

“And we keep trying to build on a foundation that we haven’t gone back to fix. I don’t think Maryland — and I don’t think the United States of America can be the country we want it to be in the next hundred years until we go back and fix that foundation.”

This article was originally published by Maryland Matters.