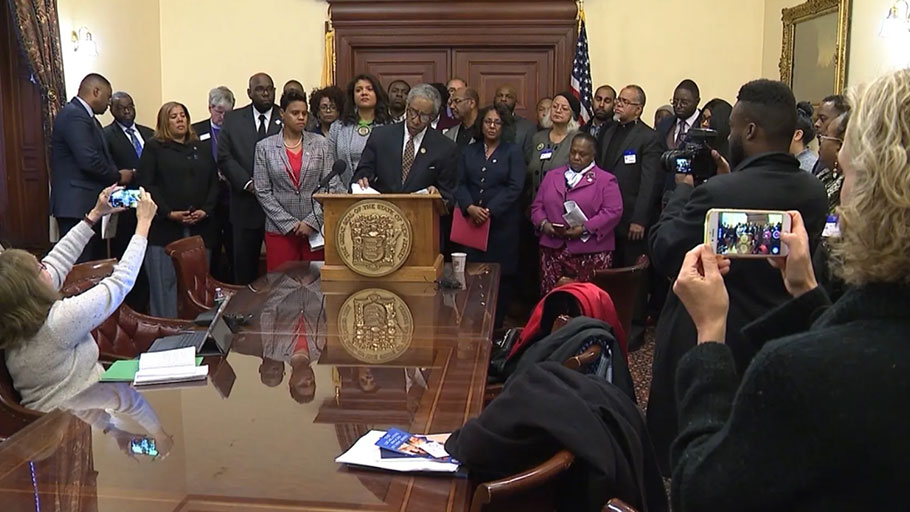 The New Jersey Legislative Black Caucus introduced a bill Thursday that would establish a Reparations Task Force. The task force would investigate the lingering effects of slavery and the role of state government.

“The great national stain of this country’s history is this conversation around slavery. And the conversation has never been fully vetted and fully explored,” says state Sen. Troy Singleton.

The task force would also research the legacy of slavery in New Jersey and its effects, from racial wealth disparities to mass incarceration.

“While whites living today were not responsible for what came before, they have nonetheless benefited. Just as black Americans have been experiencing the lingering effects of the slave system,” says New Jersey NAACP president Richard Smith.

If the panel recommends reparations, the funds could come from taxes or through another source.

“We don’t know how much is enough. We know right now we’re getting basically nothing,” says state Sen. Ron Rice.

Assemblywoman Britnee Timberlake says that the reparations don’t necessarily mean money given out directly to individuals.

“Whether or not it be through education, housing, opportunities, economic opportunities, money – We will, through this commission, come up with different methods to make sure that African Americans are made whole,” she says.

“I stand before you as the descendent of African American slaves,” says @AswTimberlake announcing the New Jersey Reparations Task Force. “We will – through this commission – come up with methods to make sure that African Americans are made whole.” pic.twitter.com/8wLtRF8vZ5

Rice says that he has experienced the lingering effects of racism and discrimination as a legislator, calling out current and former members of the Legislature, including those in his own party.

“I didn’t say it was racist. Let me tell you about some of the people who don’t look like me – Some of them have good intent, but they do things that are harmful to us because they don’t know the difference,” says Rice. “They don’t understand it. It’s unintended racism sometimes and they need to be educated.”

The lawmakers say that the Reparations Task Force could be the first step in righting one of America’s greatest wrongs.

“We will never see true equality if we do not take full responsibility for the many ways slavery has shaped the socio-economics of our country,” says state Sen. Sandra Cunningham.

Gov. Phil Murphy says that he is open to the idea of reparations. He says that he wants New Jersey to lead the nation on social justice issues.