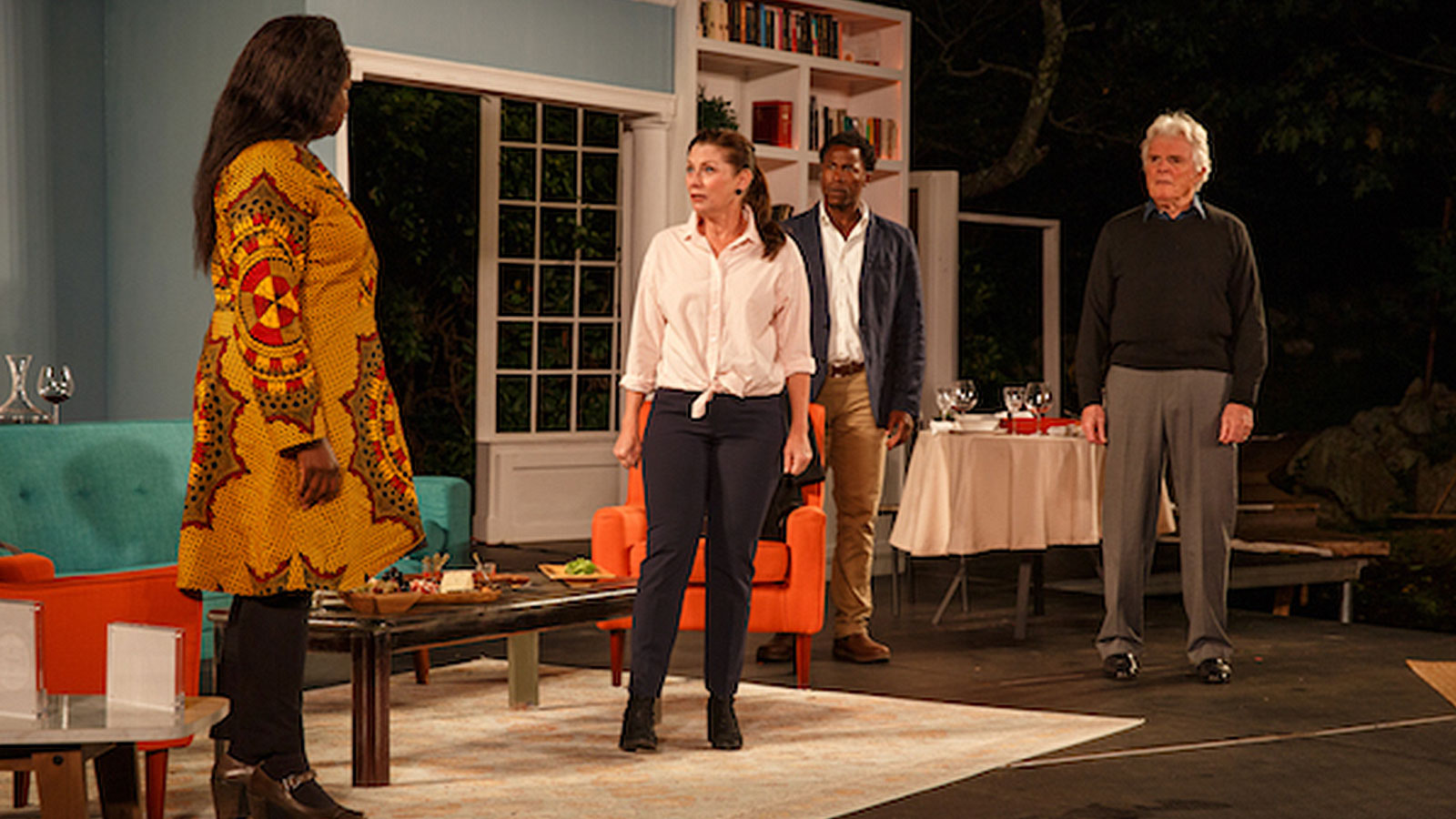 As the play ends, all four characters have a clear understanding of their marching orders. But will they — or we — act on them?

By David Greenham, The Arts Fuse —

During the second act of James Sheldon’s Reparations, well-traveled young writer Reg Ambrose (Jason Bowen) and Dr. Millie Jacobs (Lisa Tharps) share their connections to Nigeria. Reg has devoted his travel writing to African countries; Millie was born in Lagos before moving to the United Kingdom. The disturbing revelations in this drama pause for a moment. Reg and Millie agree on the wisdom of a Nigerian proverb: “You’d best not fall asleep when there’s a fire on your roof.” Of course, we have already seen the spreading swirls of smoke.

Reparations begins with a seduction. Reg has been invited to the apartment of book editor Ginny Pleasance (Angela Pierce). They navigate the mildly rough seas of interracial romance well enough, sparing a bit over their motives for this winter/spring assignation. Reg is both coy and crafty. Ginny’s a grandmother whose successful husband died seven months ago. Charles was a very popular, highly respected English teacher at posh St. Sylvan’s, a private school for boys. Ginny’s therapist has counseled that “the best way to beat the grief is to seek intimacy.” Ginny met Reg at a book launch party: he made her laugh so she invited him home.

Reg’s motivation is clear from the start. He’s completed the manuscript of his first novel, The Smuggler’s Code, and he is eager to introduce the world to Sgt. Jonathan Stripe, a Black detective who chases the bad guys through many of the cities in Africa that Reg explored as a travel writer. Stripe, he says, is “the perfect hero for our time; like Obama.”

Ginny is trying to close the ‘Charles’ chapter of her life and has one more task to accomplish for the sake of her late husband. The good people at St. Sylvan’s have raised $27 million to build the Charles Pleasance Library and Research Institute. She’s been given the blueprints and has agreed to be on hand to put the first shovel in the ground. Ginny’s confident that, once the project begins, that will end her involvement. She’d like to get on with her life.

Like so many American plays over the past decades — August, Osage County, Rabbit Hole, etc. — we are all-too-aware that Ginny and Reg’s romantic encounter isn’t going to be the beginning of a beautiful friendship. Sheldon makes that abundantly clear when Reg is asked to share a quote from his novel. Its a telling ‘tell’: “Of all the contraband we smuggle into our lives, self-delusion is the dearest and most dangerous.” So, we shouldn’t be surprised when Reparations sets off a bomb that blows up in the characters’ faces. This well-crafted script wastes little time in setting up its political give-and-take. As Ginny declares at one point: “Reg has an edge.”

As the first act ends, Reg sets off his well-timed explosive. The second act brings in old friends of Ginny (and Charles) for a luncheon visit. They are visiting from Great Britain. Alistair Jacobs, (Shakespeare and Company stalwart Malcolm Ingram), is a well-connected and successful book publisher; his wife, Millie (Tharps), is confident, independent and successful in her own right as a doctor who works to save the lives of sick children. An audible gasp was emitted by the audience when Alistair defends St. Sylvan’s, likening it to the private all-boys school he attended in Britain in his youth. “These institutions are based on the premise that a little abuse is good for a young man,” he insists, without suspecting how transparent he’s made his own self-delusion. Soon, Millie is confessing about the contraband she has smuggled, and Ginny is forced to admit, “I loved the best of Charles, but I don’t know what to do with the rest of him.”

The action of the play is staged with smooth urgency by Myriam Cyr, and the actors (especially Tharps’ Millie) skillfully maneuver the twists and turns of the plot as they search for psychological grounding. It’s not an easy task. Reparations is plot-driven and moves quickly. Once the initial premises are set out, the script becomes a locked-and-loaded melodrama, a machine made up of chugging gears and moving parts.

Set designer Jon Savage has created a welcoming upper middle-class New York apartment, and Dierdre McCabe Gerrard selected appropriate costumes. The sound design, a shared effort by Veronica Barron and Christopher Vu, is a wonderful addition. In fact, the production would have benefited from more of it. In particular, the preshow music included a compelling version of Stand By Me performed by current Harvard student Devon Gates. I suspect most people missed it and that was a shame.

Reparations serves Sheldon’s point of view, which is unmistakable and important to grapple with. There are fires burning on rooftops everywhere. And he’s right. But what to do? We’re a long way from taking collective action: do we apologize or forgive? Are reparations anything more than a radical wish? As the play ends, all four characters have a clear understanding of their marching orders. But will they — or we — act on them?

David Greenham is an adjunct lecturer of Drama at the University of Maine at Augusta, and is the executive director of the Maine Arts Commission. He has been a theater artist and arts administrator in Maine for more than 30 years.