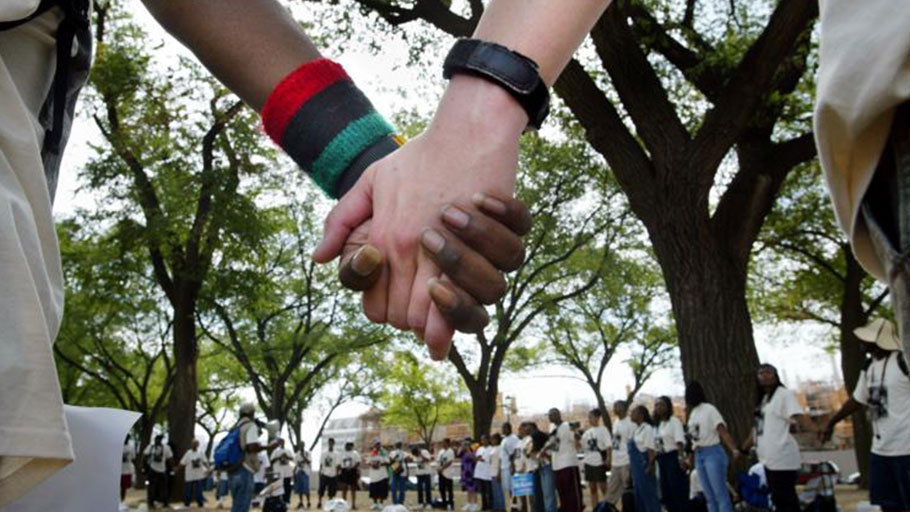 Reparations will pave the way to justice for all

Cardrian Massey, left, and Kate Chandler hold hands in a circle with others from Atlanta, Ga., before joining demonstrators for reparations for slavery on the National Mall in Washington. Pablo Martinez Monsivais, The Associated Press

CHICAGO — In the spring of 1995, I sat in a stuffy classroom studying “Literary History of England, from Beowulf to 1800,” while overlooking Southern Illinois University’s iconic Pulliam Clock Tower.

I was on the verge of boiling over. Somehow, the lone Hispanic (me and the lone black person in the tiny class were engaged in a shouting match over reparations for slavery.

Rep. John Conyers, D-Mich., had just introduced a bill for a commission to study reparations proposals for African Americans and, apparently, it was such a hot topic that it made its way into our classroom discussion on “Sir Gawain and the Green Knight.”

Though I can’t remember the student’s exact words, they ran along the lines of blacks being owed by the U.S. for the forced labor and suffering of their slave ancestors. I felt targeted, because I had been braver in expressing my opinion than the handful of my white peers nervously sitting out the whole conversation.

“Why are you looking at me?” I shot back at my classmate. “My parents came to this country in 1973, long after slavery ended. They don’t owe anyone anything!”

Thank goodness I’m no longer as young and ignorant as I was in 1995.

I think it’s appropriate that the issue of reparations has now come back into the national debate. Several of the 2020 presidential candidates have embraced the idea of using federal funds to acknowledge and compensate those affected by the ongoing legacy of slavery, including discrimination and white supremacy.

Yes, in case you hadn’t realized it from the bounty of research on the black-white gap in educational attainment, gainful employment, homeownership, health outcomes and a dozen other data points — this legacy lives on.

Randall Robinson, author of the book “The Debt: What America Owes to Blacks,” argues that acknowledgment of the nation’s debt to African Americans for slavery, subsequent segregation and continued exploitation would help heal our country’s racial divide. “It’s foolish to argue that the past has nothing to do with the present,” Robinson was quoted as saying in 2001 in the Congressional Quarterly. “There’s a reason why so many African Americans are poor: It’s because a terrible wrong occurred in our history that produced a lasting inequality.”

The question of whether reparations would actually help African Americans improve their social and economic status is hotly debated, but the question that really fires people up is who should have to pay.

I’ve done a 180 since college on the matter. Of course recent immigrants, Latinos and everyone else who thinks that they did not participate in slavery needs to sign on to the reparations movement.

I have believed this for a while now because, in the case of immigrants, if you adopt a country as your home, you have to take on their victories and their shame. But I now believe there are two more arguments in favor of vigorous support of reparations.

First, all people living in the United States today enjoy the nation’s relative wealth, infrastructure, technological advancement, etc. — all of which were built on the back of slave labor.

And if your skin is, by cosmic lottery, white, you benefit from societal preferences that are so ingrained in our culture that the reams of statistics I’ve quoted in this column over the years doesn’t even begin to convince you — the beneficiary — of those preferences.

The second reason to support the reparations movement is that there is a ripple effect when the most vulnerable people in our communities get a boost, indicating that society values and honors the sacrifices their ancestors made.

If blacks get some sort of federally funded investment in their well-being, it will almost surely lift up the low-income Latino, Asian American, white and other people who live alongside them in blighted communities with bad air quality, dirty water, poorly performing schools and few jobs.

“Just, generally, we all do better when we all do better,” said Maria Bautista, campaigns director for the New York-based nonprofit Alliance for Quality Education. “We haven’t addressed the harm this country has done to African Americans and what that means for black communities today. We’re seeing the outcomes [of the legacy of slavery] in terms of education, housing, criminalizing communities. When we start to address and repay the debt we owe to the African American community in this country, we can start towards justice for everyone in this country.”

Cepeda is a columnist for The Washington Post Writers Group.