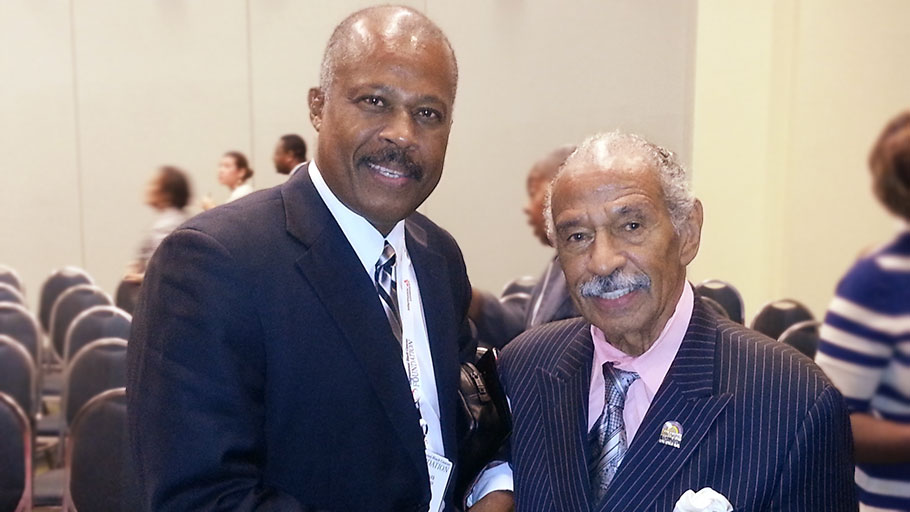 Sir Hilary Beckles Pays Tribute to the Late US Cong. John Conyers as a “Champion for Reparations”

You Are Here: Home » Blog » Reparations » Sir Hilary Beckles Pays Tribute to the Late US Cong. John Conyers as a “Champion for Reparations”

Sir Hilary Beckles and Cong. Conyers at the Annual Legislative Conference of the Congressional Black Caucus.

Conyers was the Longest Serving US Lawmaker

Jamaica, W.I. — Reparations activists and advocates across the Caribbean, the USA and around the world are mourning the passing of US Congressman John Conyers who died earlier this week at the age of 90. With 52 years of public service, Conyers was the longest serving congressman of all time.

“We at the CARICOM Reparations Commission (CRC) are deeply saddened by the recent passing of legendary US Congressman John Conyers and extend our heartfelt condolences to his family and to the people of his hometown, Detroit,” said Sir Hilary Beckles, chairman of the Commission. “A champion for reparatory justice for the descendants of enslaved Africans, Cong. Conyers vision and steadfast support for reparations has been a source of inspiration for our commission and for reparations advocates and activists across the world.”

Year after year, without fail since 1989, Conyers introduced HR 40 – the Commission to Study and Implement Reparations Proposals for African Americans Act. It is this bill that has provided the mechanism to have a public policy conversation about this historic issue in the Congress of the United States.

HR-40 is now ably championed by Cong. Sheila Jackson Lee of Texas and is working its way through the committee structure in the US Congress. Over 120 congresspersons and senators along with several of the Democratic Party Presidential candidates are publicly supporting HR-40.

“I was honored to accept his invitations to participate on two separate occasions in reparations forums that he sponsored at the Annual Legislative Conference of the Congressional Black Caucus,” said Sir Hilary. “He was a friend and mentor to me and many others across the Caribbean region and in our conversations, I found him to be warm, charming, gracious and humble and with an unwavering dedication to his political principles and convictions. He applauded the work of the CARICOM Reparations Commission and would always offer words of encouragement and inspiration.”

A lion of the US Congress, Conyers was one of the most consequential lawmakers in US history. A co-founder of the Congressional Black Caucus back in 1969 when there were only six African American congressmen he was often referred to as “the Dean of the Caucus.” Today, the Black Caucus counts over 50 active members among its ranks.

Cong. Conyers was recognized and respected as one of the most progressive members of Congress who led the fight for some 100 pieces of hallmark legislation over the years. He frequently swam against the prevailing political currents during his time in Congress.
Throughout his stellar career, he fervently supported such progressive causes as gun control, anti-poverty programs and universal health care. He held hearings to spotlight police misconduct and he never once wavered in fighting for jobs, justice and peace.

Days after the 1968 assassination of the Rev. Martin Luther King Jr., Conyers introduced a resolution calling for a national holiday in his name. It took 15 years for that legislative battle to be won, but Conyers persisted.

Even before he became a congressman, Conyers was a civil and human rights activist and a fighter for the rights of organized labor. In 1964, he traveled to Jim Crow Mississippi during Freedom Summer and offered legal representation to black voting-rights activists; one year later, he supported the Voting Rights Act as a member of the House of Representatives. He was the only congressman ever endorsed by Martin Luther King Jr.

His district office in Detroit employed civil rights legend Rosa Parks from 1965 until her retirement in 1988. In 2005, Conyers was among 11 people inducted to the International Civil Rights Walk of Fame.

“We will sorely miss Cong. Conyers but we can rest assured that his glorious legacy will live on as an inspiration to future generations. May he rest in peace and power,” said Sir Hilary Beckles.

Prof. Sir Hilary Beckles is the President of the University of the West Indies and the Chairman of the CARICOM Reparations Commission (CRC). He considers Cong. Conyers as both a mentor and a friend who inspired the ongoing work of the CRC.