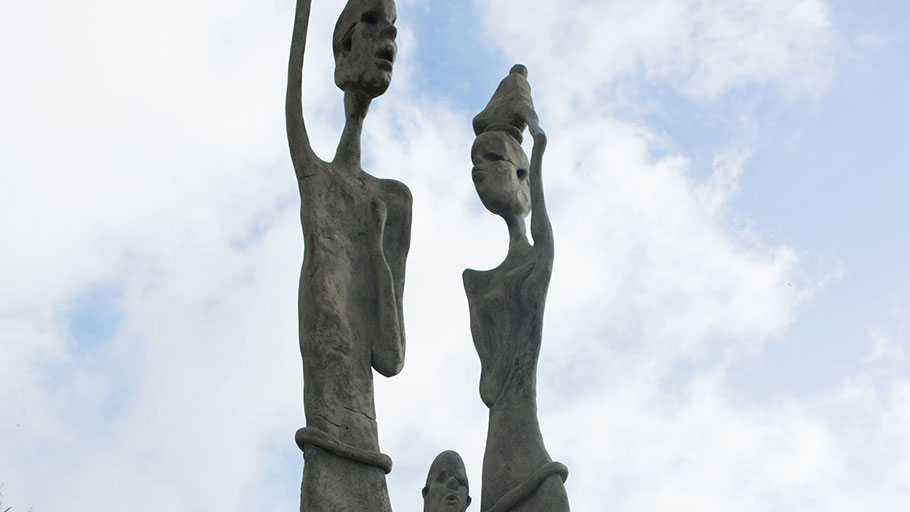 Slavery Was Part of Barbados Life for Centuries. But Its History Can Be Hard to Find.

You Are Here: Home » Blog » Reparations » Slavery Was Part of Barbados Life for Centuries. But Its History Can Be Hard to Find.

A bronze sculpture representing an African couple and their child in Rock Hall Freedom Village in Barbados.CreditCreditGina Francesca for The New York Times

There are important monuments, plaques and sites on the island. It requires effort to see many of them. Will that change?

A slender bronze sculpture representing an African couple and their child dominates a modest concrete plaza above a colorful jumble of houses in Rock Hall Freedom Village, Barbados, about a half-hour’s drive north of the island’s capital, Bridgetown.

A few feet away, a granite plaque records the names of 38 people who became residents of Rock Hall, the island’s first village for freed slaves after emancipation in 1834. And an adjacent tablet commemorates the suffering of millions of Africans in slave ships and sugar plantations while celebrating the resilience of the human spirit in the face of an overwhelming evil.

“From the belly of the slave ship to a freeholder, the spirits of the African ancestors beckon the enslaved souls guiding them to the first free village,” reads the inscription.

Nearby, a series of colorful murals celebrates the progression of the African community from the captivity of the cane fields to a free life in their new village, where they are shown working peacefully, cultivating their own crops and nurturing familiar features of Barbadian culture like kite-flying and dominoes. 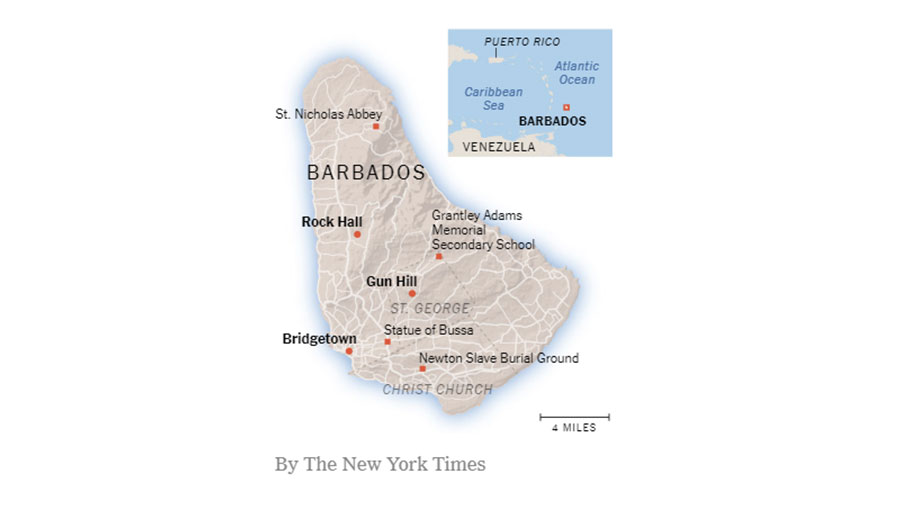 Rock Hall is a moving memorial to the system that dominated Barbados’s economic and social life for almost 200 years and forced an estimated half-million Africans to the island to work in the sugar cane fields there, and others in the Caribbean, until emancipation.

Like some other important remnants of the island’s slave history, the Rock Hall monument is neither easy to find nor well interpreted for visitors, yet it provides an insight into that past and the efforts to preserve it. 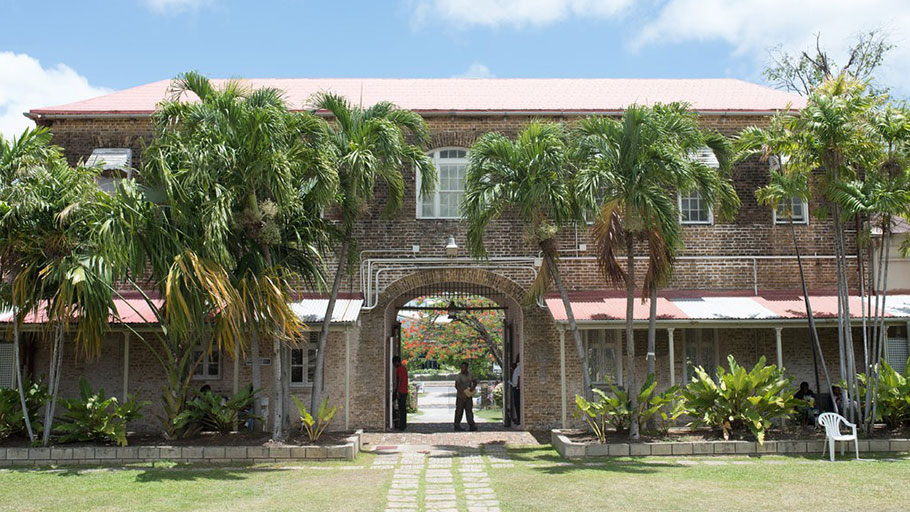 The Barbados Museum, which celebrates the emancipation of slaves through an Act of Parliament in Britain in 1834. Credit – Gina Francesca for The New York Times

“It’s a difficult history but it’s one that underpins not only the history of this island but underpins the development of global capitalism for the past 500 years,” said Kevin Farmer, the deputy director of the Barbados Museum and Historical Society. He said the wealth accumulated from sugar, rice and cotton in the New World over several hundred years until the late 19th century was the result of the “blood, tears and death” of millions of enslaved Africans.

Traces of that history can be found in the museum, which celebrates the emancipation of slaves through an act of Parliament in Britain — the colonial power for more than 300 years until 1966 — but also contains chilling artifacts such as a brand used to burn an owner’s initials into the skin of a slave, and an iron ball and chain that would be attached to a slave’s leg to prevent escape.

Mr. Farmer rejected a reporter’s suggestion that the island has been reluctant to tell the story of slavery in ways that are accessible to visitors, and said its efforts will soon be bolstered by a signage project in Bridgetown — parts of which are designated as a Unesco World Heritage site — that will include important slavery-related locations.

“Thirty years ago there might have been some reluctance, but with the growth in scholarship and the willingness of people to engage in that past, I would have to answer no,” he said.

For now, one sign of Bridgetown’s slave history can be seen in a plaque marking The Cage, where runaway slaves were kept until their owners came to reclaim them. The enclosure, established by an act of Parliament in 1688, was originally located in the center of Bridgetown but was moved to the pier head in 1818 so that the town’s image would not be hurt by the “noise and stench” of the slaves kept there, the plaque says. 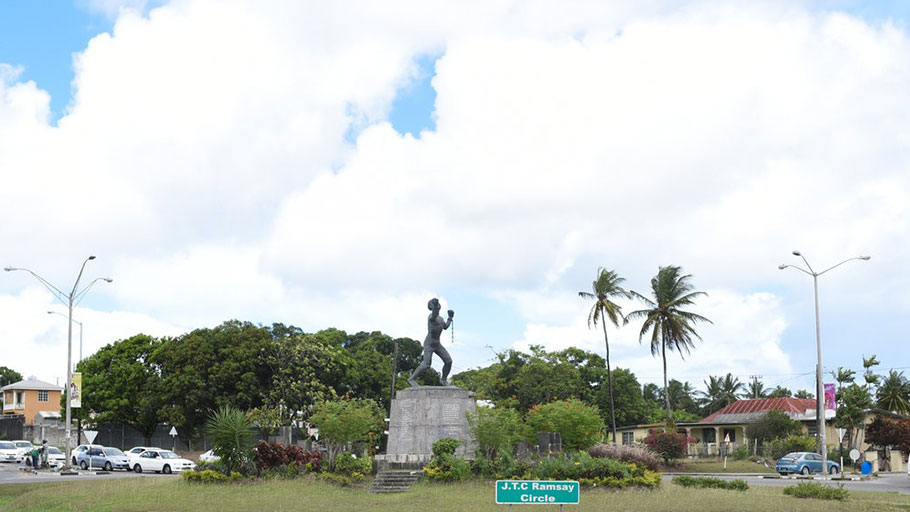 The statue of Bussa, a slave who led a failed revolt in 1816. Credit – Gina Francesca for The New York Times

Perhaps the most vivid celebration of emancipation can be seen in a statue of Bussa, a slave who led a failed revolt in 1816. He was killed by British officers in the uprising, along with many co-conspirators, but the statue shows a black man with his face tilted triumphantly to the sky and holding broken chains from his outstretched arms.

Built on a busy traffic circle on the outskirts of Bridgetown, the statue isn’t easy to reach. But visitors who dash across the intersection will find the base inscribed with a portion of the Abolition of Slavery Act in 1833, and a plaque unveiled by the island’s former Prime Minister Owen Arthur in 1997, saying that the monument should serve as a reminder that Barbadians must never again allow themselves to become slaves “physically or mentally.”

The “Bussa Rebellion” prompted the British authorities to build six signal stations on the island’s high points where officers could detect slave revolts and warn other lookouts. One of the stations, Gun Hill in the Parish of St. George, has been restored by the Barbados National Trust, and offers visitors panoramic views to the south and east, plus an exhibition on the semaphore system used for signaling any threat from land or sea. 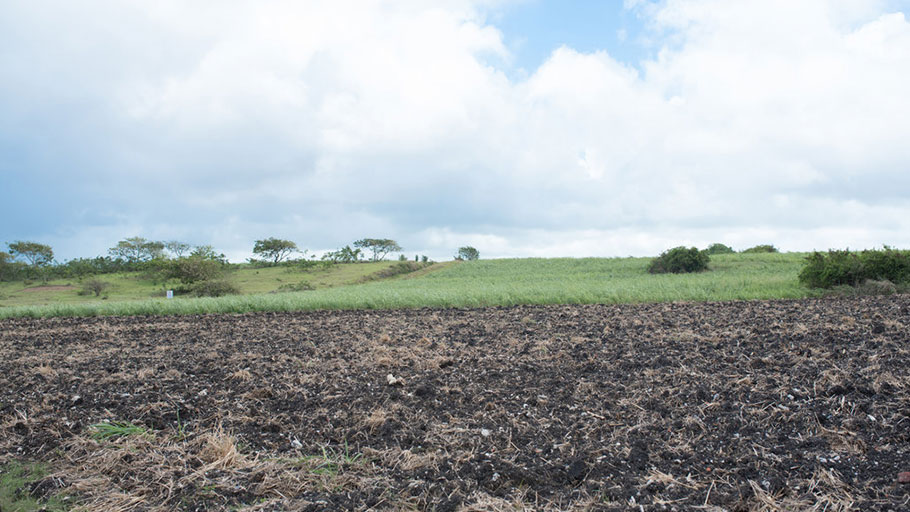 The Newton Slave Burial Ground, bordered by sugar cane on the edge of an industrial estate in the Christ Church Parish. Credit – Gina Francesca for The New York Times

Another obscure historical site is the Newton Slave Burial Ground, on the edge of an industrial estate in the Christ Church Parish in the south of the island. The site, which is not marked from the nearest road, is reached via a grassy track along the side of a sugar cane field. It is marked simply by a metal sign saying that some 570 slaves from the adjacent Newton Plantation were buried there, and that some of their belongings, such as eating utensils and jewelry, are on display in the island’s museum.

Excavation at the site found human bones with very high concentrations of lead, according to Sir Henry Fraser, a former Barbados senator and a leading advocate for the preservation of the island’s heritage. The slaves were sometimes given rations of the island’s plentiful rum to keep them docile, but the spirit was distilled in lead pipes, which poisoned them, he said.

“Lead poisoning produced tiredness and lethargy, which would have led to this popular view that the slaves were lazy and you had to whip them to make them work,” Mr. Fraser said.

Other than the sign, visitors to the burial ground will see only an open field, appropriately bordered by sugar cane, inviting them to imagine the lives of people that ended at that site.

Mr. Fraser, who is president emeritus of the Barbados National Trust, has been pushing for the restoration of a slave hospital on the grounds of the Grantley Adams School, a high school in the Parish of St. Joseph. The building was gutted by fire about a decade ago and is now partly occupied by a school workshop, but it is the only site of its kind to survive on the island and so should be preserved, he said. 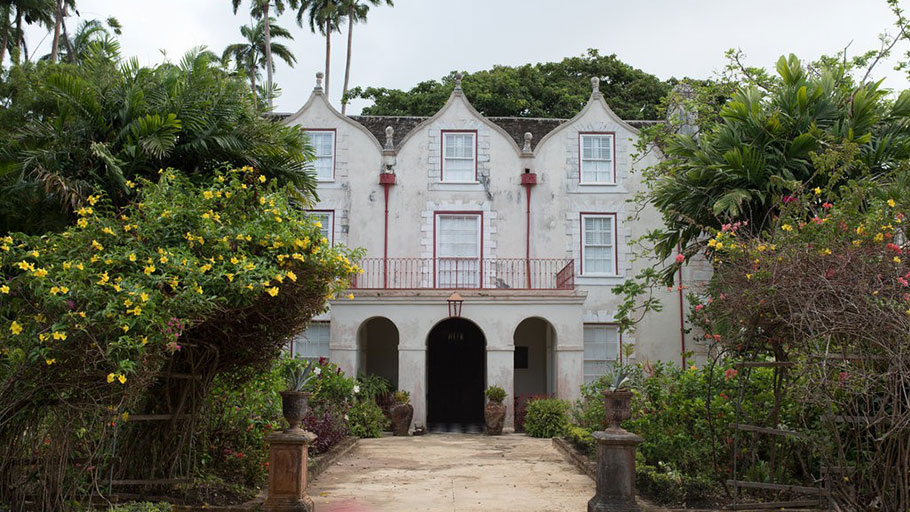 A very different view on the history of slavery can be seen at St. Nicholas Abbey, a meticulously restored sugar plantation in the northeast of the island. The estate, which began to grow sugar in the 17th century, offers visitors a gracious vision of plantation life with manicured gardens, grand dining rooms where the “plantocracy” — plantation owners and their families — entertained guests, and a restored sugar mill that is still processing cane.

In a hallway leading to the rum-tasting room and the gift shop, the slaves are acknowledged with a reproduction of ledgers showing the prices paid for individual men and women and, along with other assets, as stated by the document, their total monetary value.

One page listing female slaves includes Susanna, who was bought for 50 pounds, and Daphne, who is recorded as being worth only 15 pounds.

While the plantation’s slave history gets short shrift at St. Nicholas Abbey, it is marked in a nearby village where a slave house is being restored. Earlier this year, the single-story stone building had a new roof of corrugated iron and some new cement on its walls, but its doors and windows were empty spaces. It was open for any enterprising visitors who wanted to stand in the one-room building and imagine the hard lives of its occupants.

With its auditorium showing archival film from the 1930s and a new miniature railway under construction to take tourists around the estate, St. Nicholas Abbey is a highlight of heritage tourism in Barbados. But critics say the island’s authorities have not done enough to highlight an essential part of that heritage: its history of slavery.

“Don’t shy away from the truth,” said Mighty Gabby, a prolific calypso singer and one of the island’s cultural ambassadors. “Geographically, we are closer to Africa than any other place in the Caribbean. People are anxious to find out these truths.”