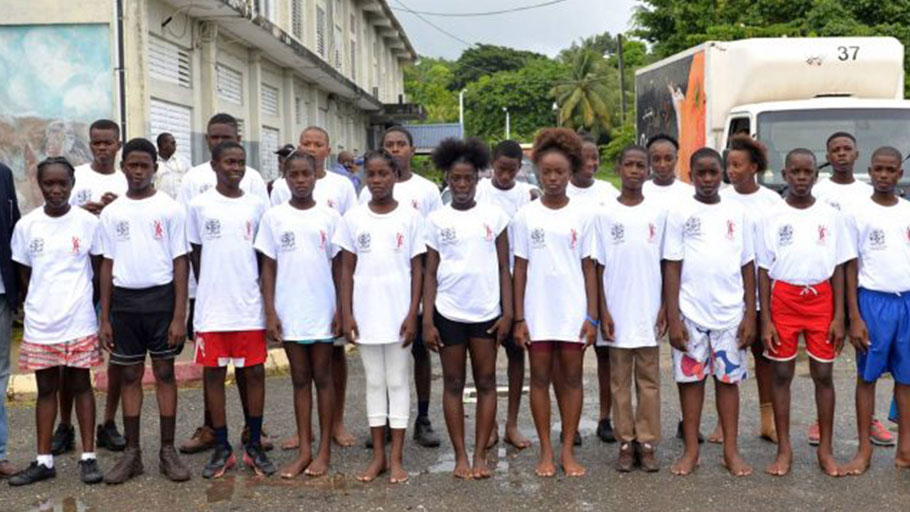 Students across the region are learning about the ills of slavery and the issues surrounding reparations through the CARICOM Reparations Youth Baton Relays.

The relays have been staged in Barbados, Guyana, Suriname and St. Lucia, as well as in Antigua and Barbuda. The exchange of the baton from Antigua to Jamaica took place on October 10.

The Jamaica leg was spearheaded by the National Council on Reparation (NCR), which falls under the Ministry of Culture, Gender, Entertainment and Sport, in collaboration with the CARICOM Secretariat.

It saw the participation of athletes, students, youth leaders, Junior Mayors, and Municipal Corporations over the past three months. There have been some 15 rallies and baton exchanges in Parish capitals island wide.

Member of the NCR, Steven Golding told JIS News that the baton relays passed through heritage sites and places of historical significance in Jamaica, including the Parliament building, located at 81 Duke Street in Kingston.

“It was a superb run and we were surprised at the interest that it generated, the energy of the young people who participated. They were very charged and realized that they were not only representing their schools, but their nation and their race,” he said.

He explained that sensitization sessions were held with the students before the runs to explain CARICOM’s call for the United Kingdom to pay reparations as compensation for its involvement in slavery and the slave trade.

“There were talks explaining what reparations meant, what it was about, going into the history of how our ancestors were forsaken and how they never received justice and our own responsibility to them and their legacy to see this fight through to the finish,” he added.

Mr. Golding said that the NCR will seek to continue the sensitization sessions across the country.

“We will continue to move across the island and getting the young people aware because, as we said on the relays, it is important that we speak with one voice, not just as a nation, not just as a people, but as a region towards reparation,” he emphasised.

He said that details of the education programme, which will incorporate the performing arts, will be announced by the NCR later this month.

Mr. Golding, who is also President of the Universal Negro Improvement Association mentioned plans to produce a play about Reparations. He said that it will be similar to the production titled, ‘The trial of Governor Eyre’ written by attorney-at-law Bert Samuels.

“We are contemplating another play about reparations being brought against the Queen. Even though it is entertainment it is a good way for people to realise the depth and to consider the various angles when it comes to the issue of reparation,” he added.

CARICOM Reparations coordinator Sydney Bartley told JIS that discussions are ongoing with government officials in the Bahamas, for the next leg of the baton relay and rally.

He said the event involves public education and dialogue, building awareness of and recasting how reparation is seen and understood.

According to Mr. Bartley, the initiative began in 2013 following a meeting by CARICOM Heads of Government who decided that “reparations was something that they really need to pursue and to repair the damage that was done within the Caribbean because of slavery and colonial oppression”.

Following that meeting, he said the CARICOM Reparations Commission chaired by Vice Chancellor of the University of the West Indies Professor Sir Hilary Beckles, was established.

CARICOM countries have so far formed separate commissions. Jamaica has elected 12 members to serve on the NCR which is chaired by Professor Verene Shepherd.

Explaining the rationale behind the baton relays and rallies, Mr. Bartley said there was a need to involve young people in the discussions about reparations.

He commended the young people who he said were very eager to participate in the project.

“We found a level of enthusiasm once we sensitised them, once we met with them and showed them how slavery had impacted our ancestors,” he said.

Mr. Bartley noted that the recent inclement weather conditions did not prevent the baton relays.

The NCR was set up to receive submissions, hear testimonies, evaluate research and carry out public consultations with the aim of guiding a national response to reparations. It is also to present recommendations for diplomatic initiatives, security considerations, education and public information required to guide the reparation process.