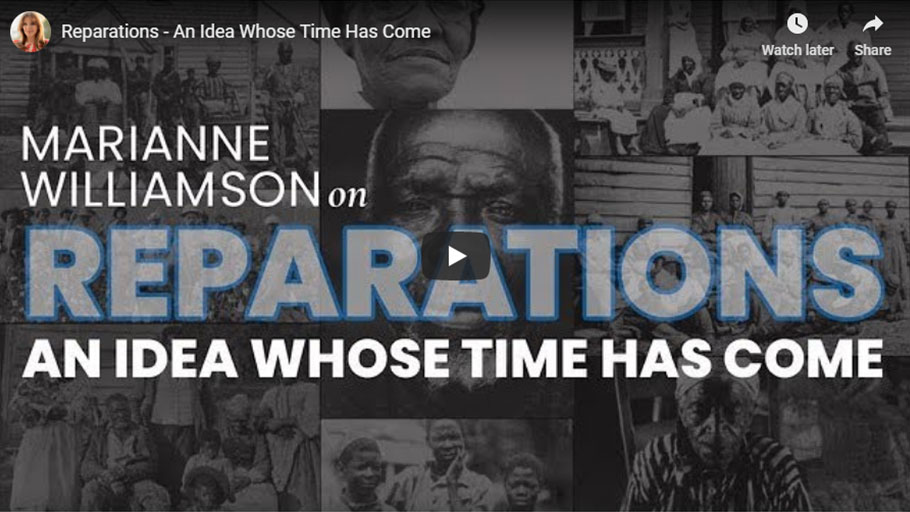 Williamson focuses on reparations in first ad of presidential campaign

You Are Here: Home » Blog » Reparations » Williamson focuses on reparations in first ad of presidential campaign

The ad is titled “Reparations — An Idea Whose Time Has Come.”

As the 60-second spot’s name suggests, the commercial is centered around one of Williamson’s main issues of focus: reparations for American descendants of slavery.

When asked in the commercial why she supports reparations, the Democratic longshot answers, “I’ve been talking about this since my book came out in 1997. The first enslaved persons are brought over in 1619, slavery not abolished until 1865. That’s 250 years, followed by another hundred years of institutionalized violence against black people.”

“That’s 350 years of institutionalized violence. That’s longer than this country has been in existence,” she says.

Williamson’s plan would dedicate between $200 billion and $500 billion to infrastructure, education and other projects in black communities around the country.

In an interview with Hill.TV in April, Williamson said she would consider anything less than $100 billion an “insult.”

“What I have proposed is $200 to $500 billion — I think anything less than $100 billion is an insult,” Williamson, an author and activist, told Hill.TV at the time, adding that the money would be paid over a 20-year period.

Currently, the best-selling author and nondenominational faith leader is polling at 0.2 percent nationally, according to the RealClearPolitics average of polls.

After qualifying for the first two rounds of Democratic debates in June and July, she has failed to qualify for the past two debates and has yet to qualify for November’s debate.

Williamson is one of four Democratic candidates who are still in the primary race after failing to make the past two debates.

The ad will air in South Carolina, where Williamson is currently polling at zero percent, according to the latest Post and Courier poll.

This article was original published by The Hill