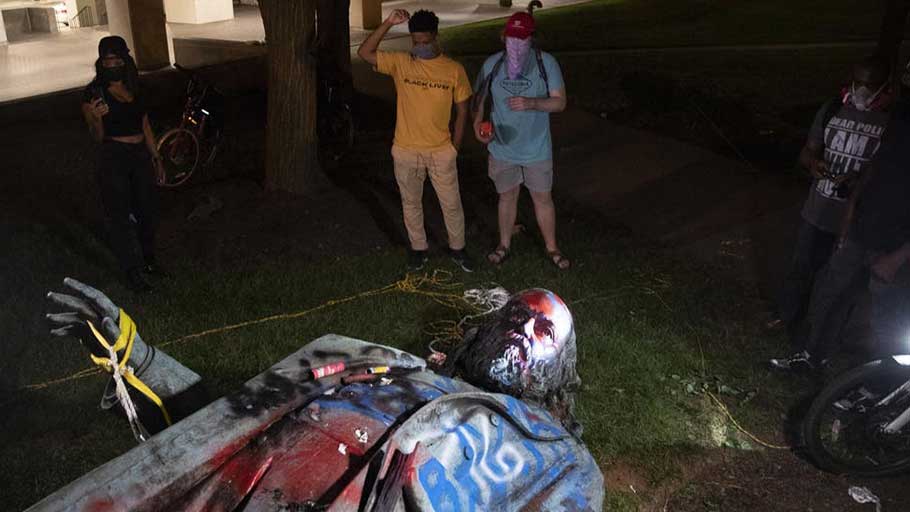 Be Careful What Monuments You Go After

You Are Here: Home » Blog » Commentaries/Opinions » Be Careful What Monuments You Go After

I recently called for Long Beach, California school officials to re-examine having the name of former President Woodrow Wilson on one of its schools. A day later a reporter doing a story on the controversy asked, “I wonder in response to those who say changing school names is going too far…”

It was a fair question. My answer as far as Wilson was concerned was easy. Wilson was not just a racist in word but in deed. As President, he had the power to cause much racial pain. It’s crucial to make that distinction between word and deed when battling to exorcise names of alleged racists from public places, and defacing or ripping down statues and monuments of them. It is true that casual and accepted racist sentiments were the norm of pre 1960s civil rights era America. And, was expressed and accepted by a wide body of the general public. Wilson was a part of those times. He should not be indicted for that. But his racism didn’t stop with casual racist remarks and sentiments.

Wilson touted the Klan when it was at it murderous and terrorist worst, championed the exclusion of Japanese and Chinese from the US, screened, and lauded the racist film, Birth of a Nation at the White House, and booted Blacks out of federal government jobs. His action had massive damaging effect on law and public policy then and now.

The same can be said about Confederate generals and officials. They were traitors to their country and the Constitution which many of them had at one time sworn to uphold. No country on the planet would dare give places of honor to those who worked to tear apart their government.

Their traitorous rebellion insured four more years of brutal bondage for millions of African-Americans and a century after that of vicious, ruthless, and unrelenting terror, murder, pillage, Apartheid like segregation, grinding poverty, and gaping racial disparities in health, education, and the criminal justice system for many Blacks. The South and the nation certainly can thank them for much of that even today.

Now after this things get blurred and muddled when it comes to knocking down from perches of honor many others purported to have done heinous and despicable racial acts. The monuments, statues, and names on public places of men such as Ulysses S. Grant, Abraham Lincoln, Washington, Jefferson, and James Madison readily come to mind. Grant and Lincoln are lambasted because of remarks considered racially demeaning. Grant in addition as President is ripped for his purported sanction of the murderous pillage of Native American lands. The Founding Fathers, Washington, Jefferson, and Madison, of course, were slaveholders.

But there are three great dangers in lumping them in with Confederate generals. One, examining historic figures through the lens not of their times but present times is always risky business. They are taken out of the political, social, and racial context of their era. Another is picking and choosing only one bad part of their legacy to paint them as arch racial villains.

Grant is a textbook example. His administration’s policy toward American Indians must be condemned. But Grant as Supreme Union Army Commander played a towering role in Black emancipation. As President he used federal power to battle Klan terror in the South. He backed Reconstruction era civil rights bills.

Yes, Jefferson was a slaveholder. But he opposed the slave trade, the expansion of slavery into new American territories, and gave the world the monumental template for liberty and freedom in the Declaration of Independence. African Americans, though unintended, and others have benefited from this.

Then there’s the peril that if you totally remove the racial ugly from history, you squander a golden opportunity to turn this stain into a teaching moment for this generation and future generations. That’s exactly what The National Memorial for Peace and Justice, informally known as the National Lynching Memorial, and the Holocaust Museum have done with slavery, racial violence, and genocide. So, say with Jefferson, we can use him to discuss the horrors of slavery, the importance it played in shaping law, public policy, and the economic might of America that still stamps America to this day.

Slapping the name of a historic figure with a checkered past on a public place or erecting a monument to him is not sacred and immutable for all times. However, if that name or that statue is on or in a public place it is fair game for an honest evaluation and even reevaluation of what that individual stood for then and how his words and deeds still influence the present.

There is one more danger. The across the board assault on monuments has predictably ignited backlash. The American Constitutional Rights Union, for instance, a conservative watchdog group based in Florida, has loudly demanded that public officials protect private buildings, monuments, and statues from those they label leftists and anarchists.

Then there’s Trump. He still swoons over long dead Confederate generals and threatened to derail a military spending bill that would purge their names from military bases. The monument and name assailants by not making the distinction between the worthy and the unworthy and tossing them all in the same racially hideous past give lots of ammunition to Trump and company to paint them as mindless haters and anarchists out to destroy America’s heritage. That said, heed the admonition, be careful what monuments you go after.