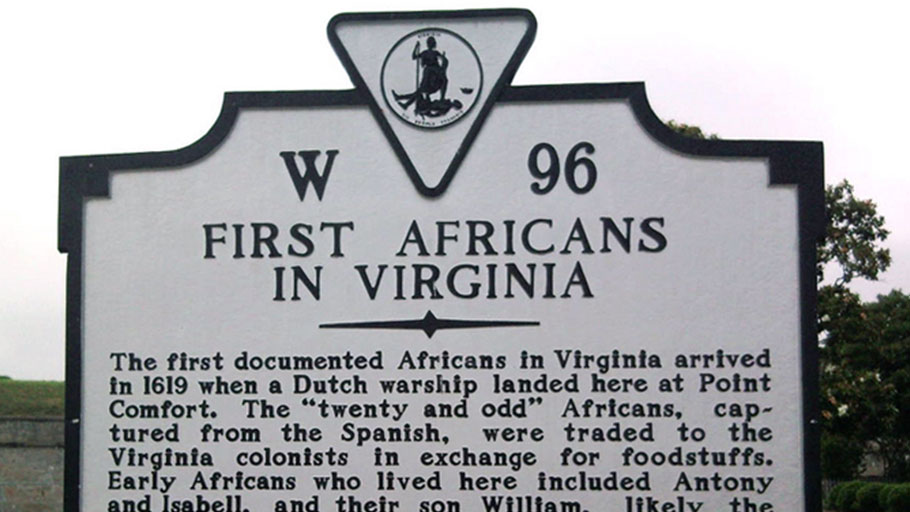 Bearing Human Cargo: 400 Years Since the Arrival of the First African Slaves in the American Colonies

You Are Here: Home » Blog » Commentaries/Opinions » Bearing Human Cargo: 400 Years Since the Arrival of the First African Slaves in the American Colonies

Scholars of the African diaspora speculate that between 1525 and 1866, more than 12.5 million people were stolen from the African continent and transported to the New World. Of those that traveled, only 10.7 million survived the treacherous and excruciating journey known as the Middle Passage. Spain and Portugal were the initial European powers to engage in the horrific yet profitable trade, but others soon joined suit, including Great Britain, whose colonists settled in large numbers on the North American mainland beginning in 1607. The arrival of the first Africans in the New World in 1619 marked the beginning of the English slave trade. 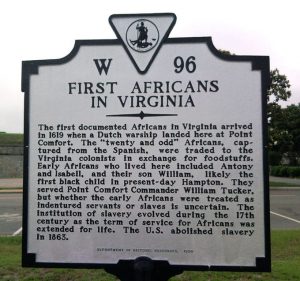 According to historian Tim Hanshaw, the first Africans in the colonies came from Angola and were initially captured by Portuguese raiders in a series of skirmishes against the Kongo and Ndongo Kingdoms located near West Central Africa. In the summer of 1619, Portuguese raiders marched the captives some 200 miles towards the coast, to the slave port of Luanda. Disease, thirst, and hunger killed many. 350 remaining captives were put on board the Portuguese slave vessel San Juan Bautista which had the initial destination of Vera Cruz, on the coast of modern-day Mexico.

Upon arrival to the Gulf of Mexico, two British privateers, the White Lion and the Treasurer attacked the slaver. Hoping to find a merchant vessel fat with gold stocks, they settled for the human cargo and took possession of approximately 60 Africans on board. The two ships, flying with Dutch colors, set sail for the English colonies on the American mainland, and The White Lion arrived at Point Comfort in modern-day Hampton, Virginia, towards the end of August 1619. The majority of the men and women were immediately sold into bondage to wealthy planters, distributed across the colony. Among the buyers were Governor Sir George Yeardley, and powerful merchant Abraham Piercey. According to scholar Kwando Mbiassi Kinshasa, among the Africans were a man and a woman known as Antoney and Isabella whose baby became the first documented African baptized in English North America – a child known as William Tucker.

A few days after the arrival of the White Lion, the Treasurer arrived in port at Point Comfort and possibly sold an additional 7 to 9 Africans. Among them a young woman named Angela, who was purchased by Lieutenant William Pierce, a wealthy tobacco planter and burgess representing Jamestown. In an interview for the Washington Post, historian James Horn, president of the Jamestown Rediscovery Foundation said, “That is a chilling aspect of the slave trade. People are being treated like livestock. The capability of women to have children was in slavers’ minds. To survive a journey like that, my own sense is she was young and possibly very young. Where there is no evidence, it is fair to speculate.”

When the ship arrived at the Jamestown colony, John Rolfe, the former husband of Pocahontas, simply described it as “a ship brought nothing but 20. and odd Negroes.” A census conducted in 1625 revealed a total of 23 Africans living in Virginia, a number which increased to approximately 800 only 40 years later. The Africans who arrived in 1619 represented the first in a long succession of slaves transported to the Americas. It wasn’t until Abraham Lincoln’s Emancipation Proclamation in 1863, 244 years later that slavery was officially outlawed in the United States of America. By then, over 4 million African Americans lived in bondage.

Although 1619 remains a historic marker, overemphasizing the date or dismissing the long and complicated history of slavery in the Americas would be a mistake. The date may very well serve as the marker of the beginning of African slave possessions but Africans were present on the continent long before this date. For example, in 1526, several enslaved Africans were part of a Spanish expedition in modern-day South Carolina, rebelling against their captors and helping to prevent the founding of a colonial settlement in the region. According to some scholars, there is also evidence that there were numerous African slaves present on the fleet of Sir Francis Drake when he arrived at Roanoake Island in 1586.

While 1619 marks the de facto beginning of African slavery in the British colonies in North America, it also misguides the fact that free Africans and African slaves were a vibrant and important part of the “New World,” long before 1619. Historians such as John Thornton have shown that the Atlantic slave trade was a transnational endeavor, and was already well established long before the arrival to Jamestown. Michael Guasco, writing Smithsonian Magazine, noted, “As early as May 1616, blacks from the West Indies were already at work in Bermuda providing expert knowledge about the cultivation of tobacco.

There is also suggestive evidence that scores of Africans plundered from the Spanish were aboard a fleet under the command of Sir Francis Drake when he arrived at Roanoke Island in 1586.” Guasco argues that highlighting the 1619 date effectively erases the memory of many more African peoples than it memorializes. Scholar Eric Hershthal argues that the date “suggests a certain timelessness to anti-black prejudice, when in fact racism developed over time and was as much a consequence of slavery as it was a cause of it.”

Still, the year 1619 is significant. In 1619, the English settlers in Britain’s new overseas colonies faced a test. Would they reject the European standard of African forced servitude, or incorporate it into their newfound society? They were relative newcomers to African slavery but embraced it wholeheartedly, and set off a historical chain of events which still reverberates in American society where freedom and equality are still unattainable for many.

Albinko Hasic is a PhD student at Syracuse University, whose research concerns propaganda.