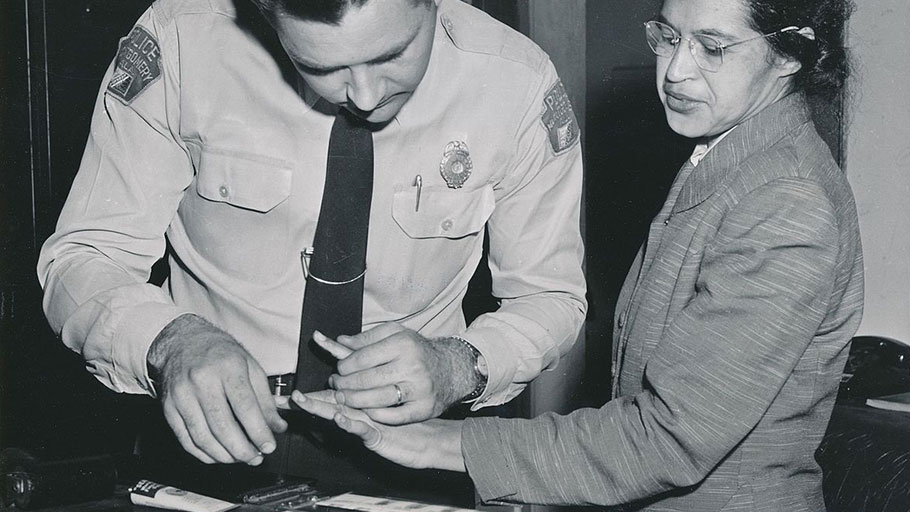 What You Don’t Know About Rosa Parks

You Are Here: Home » Blog » Commentaries/Opinions » What You Don’t Know About Rosa Parks

This week would’ve marked her 105th birthday — it’s time to move beyond the quiet seamstress narrative.

By Urana McCauley as told to Liz Dwyer, Shondaland —

This is how you know her: She was the tired seamstress who refused to give up her seat, sparking the Montgomery Bus Boycott of 1955. Maybe you remember Rosa Parks as that quiet, older woman being honored at an awards show. Or maybe you remember seeing pictures of her shaking a President’s hand. But at this year’s Golden Globes, when Oprah Winfrey talked about Recy Taylor, a woman from Alabama who was kidnapped and raped by six white men, Oprah also did some myth-busting about my aunt with these words: “Her story was reported to the NAACP where a young worker by the name of Rosa Parks became the lead investigator on her case and together they sought justice.”

I was excited when Oprah brought up Taylor’s story because people need to know these things happened to black women. It’s our history. But it was also emotional for me to hear Oprah’s words because she gave people the chance to see that Rosa Parks — my Auntie Rosa — was not just a tired old lady who sat down on a bus one day. With February 4 being (what would have been) my great aunt’s 105th birthday, I’m going to Woodlawn Cemetery in Detroit to pay her my respects. But I also pay her my respects by refusing to let her legacy be turned into a caricature. I believe her story is more relevant than ever because she and people like her laid a foundation so that women today can be more vocal, can run for office, can demand equal rights and equal pay, and say we don’t have to be harassed.

I regularly give presentations to organizations and schools about how tirelessly my aunt worked for justice and how she’d been heavily involved in civil rights work long before she refused to give up that seat. But, real talk, I didn’t realize who my aunt really was until I was 19-years-oldin 1995and she took me to a NAACP event. People were screaming at her like she was Michael Jackson. “Oh my God, you’re Rosa Parks.” I had never witnessed that. The whole time Auntie Rosa was sitting there, like “Oh it’s not a big deal.” She was very humble.

I know, it sounds crazy that that whole time I didn’t understand, but, you see, she was just my aunt in my life. She would come visit, or I would go visit her, and she would ask me the same questions your aunt probably asks you: “What do you want to eat? What do you want to drink? I made some lemonade — you want some? How’s school? I talked to your grandmother and she says she ain’t heard from you.”

After that NAACP event, that’s when I started asking her questions about what she witnessed, what she endured, and what life was like for black people back then. That led to her telling me a lot of stories. She’d tell me what her life was like when she was a little girl growing up in Alabama. One of the things that people don’t understand about my aunt is that she was an activist her whole life and she started questioning things at a young age. I think part of it was her upbringing with her grandfather, Sylvester Edwards. He would sit up at night with a shotgun — in case the KKK might come by and try to kill them — and talk to her about black resistance and the key figures in it: Crispus Attucks, Harriet Tubman, Marcus Garvey. That laid the foundation for my aunt to feel like, “This isn’t right. I should be doing something and becoming an activist.” Her whole life became dedicated to change.

When she was 10, a white boy pushed Auntie Rosa, and she pushed him back. Auntie Rosa’s grandmother told her, “You need to be quiet, you need to stop being so vocal.” She was told, as black people, we’re not allowed to do those things to whites. Her grandmother was concerned that she’d get hurt, that she could even get lynched. But Auntie Rosa told her grandmother, “Let them try to lynch me.” She was that bold, even when she was young.

Sometimes I struggle with social media because it seems there’s always somebody belittling Auntie Rosa. I recently saw someone post that my aunt wasn’t really black. Or people say that she was strategically placed on the bus in Montgomery because she was lighter skinned. It’s amazing to me that they would think that. Yes our family ancestry is part African American, part white, and part Native American. Auntie Rosa considered herself black and was treated as black. We have a lot of work to do in this country regarding colorism, but whether you’re light or dark — and this is still true today — you are black in America and you’re going to be treated accordingly.

People also think that her not giving up her seat was all a planned, staged thing for the media. Maybe you’ve seen that famous picture of my aunt getting arrested and the man fingerprinting her — well, that’s not even from December 1, 1955. It’s from the second time she was arrested. (Yes, she got arrested more than once.) By the time that photograph was taken, word had gotten out across the country that Montgomery had started a bus boycott. So that’s when the media showed up to take a picture.

My aunt wasn’t even paying attention that day she got on the bus. She had been avoiding that driver’s bus for 12 years. He would stop at her stop and she wouldn’t get on. That particular day she wasn’t paying attention because she was thinking of Emmett Till, who had been murdered that summer. She already paid her money when she realized it was that driver, but then she figured she’d go ahead and sit down. She didn’t stand up when the driver demanded that she stand up because she kept thinking of him being killed. She was that angry. Keep in mind, it was legal for bus drivers back then to carry handguns — my aunt could have been shot and killed on that bus.

Once word of mouth spread about what happened to my aunt, it helped people have a little bit more courage than before. You have to understand, my aunt was a known person in the community. She became the recording secretary for the NAACP almost 15 years before she refused to give up her seat on that bus. Everyone knew her based off of her writing down stories like Recy Taylor’s: Oh, she was the lady who held my hand when my uncle got beat up. She got my kid involved in a youth program to read books. She was the one who came and tried to get me to register to vote. They were shocked that something could happen to nice Mrs. Parks. Before then, many black people were like, “Oh well, that person should have not got arrested. They should have just gotten off the bus. “

She wrote in one of her journals about her feelings of hurt after she got arrested. She worked in the department store where she was a seamstress for the next five weeks after that and then they let her go. During that time, her black coworkers didn’t speak to her — that whole five weeks. She would say good morning and they wouldn’t say anything. It was very disheartening. They looked at her like she was stirring up trouble for them. My aunt explained to me that it was because Jim Crow was telling them, “This is the best life you’re going to have, and you can get killed if you resist.”

People also don’t know that my aunt went through a lot of financial hardships after what happened. She had health issues and developed ulcers and couldn’t afford the medication. She didn’t get real, stable work until 1957 when her brother, my Grandfather McCauley, convinced her to move to Detroit. She sacrificed her privacy, her job, her marriage, her health. She never talked about that with people, though. She just didn’t want to burden people or make them feel sorry for her.

It still breaks my heart to remember my aunt telling me how many times it took for her to get registered to vote. Back then, they made black folks take a literacy test knowing that many couldn’t read or write. It was a trickle down effect of the lack of education for black people. But Auntie Rosa, she knew all the answers backwards and forwards, but year after year they denied her. And finally it was a white woman in the office who said, just let her register to vote. My aunt had been persistent, showing up. “I’m here to take the test so I can get registered to vote.” And then I think about how, as soon as I turned 18, all I had to do is go sign a card.

Yes, I’m glad that Oprah spoke up about Recy Taylor and about my aunt. I know people might still try to belittle my Auntie Rosa by saying, “Oh she was just a little seamstress.” But that “little seamstress” is proof you can be anything out here and still make changes in your community. My aunt felt passionate about civil rights — it was a passion she felt in her soul, and we all have to tap into that. Whether it’s working with children or with the elderly, or voting rights or women’s rights — working at a homeless shelter or women’s shelter or getting trained to volunteer on a suicide hotline on the weekends. We can all do a little thing and the ripple effect of it can go a long way.

Today, I’ll be visiting Rosa Parks Elementary School in Toledo, Ohio to talk about my aunt with the kids. We’ll have some cake, we’ll celebrate. And I’m going to tell them to remember that Rosa Parks was a regular citizen that, in her heart, felt like she should be doing something for change. Instead of waiting for others, she took that leap.