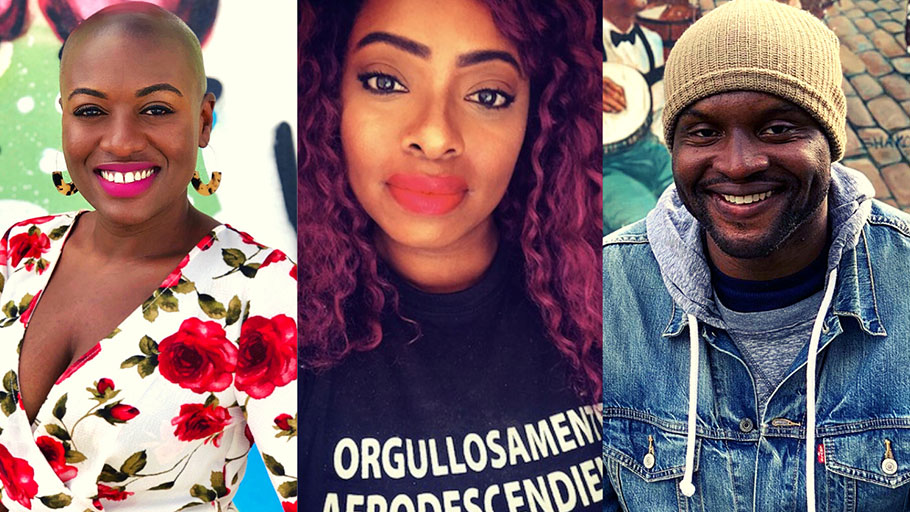 For Some Black People, The Term ‘Latinx’ Is Another Form of Erasure

You Are Here: Home » Blog » Commentaries/Opinions » For Some Black People, The Term ‘Latinx’ Is Another Form of Erasure

Black diasporans discuss the ways the label can be overly broad—and leave out an important part of their identities.

For many Black people, their identification with Latinx identity is complicated—the term, meant to be all-inclusive, has the exact opposite effect. Though Black and Indigenous Latin Americans have contributed significantly to Latinx culture (think musical genres like rumba, tango, and reggaetón, to name a few, or the masterful creations made from root vegetables that tie back to Africa), Black Latinxs are frequently erased from the fabric of Latinidad.

There’s a growing frustration among Black people implicated in Latinx identities that goes deeper than the usage of the gender-neutral term. This re-examination grapples with the 500-plus-year history of Latin American brutality toward marginalized groups that still seeps into U.S. thinking around identity-based terminology.

A conversation-shifting hashtag #LatinidadIsCancelled, started by Afro-Indigenous (Zapotec) writer Alan Pelaez Lopez, outlines just how mestizx, white-centering, anti-Black, anti-Indigenous, and anti-queer the culture remains. (This was the first of a few examinations of anti-Blackness and Latinidad as they arose in popular culture, and the one which summed it up most cohesively.) This has prompted scholars, activists, and everyday Afro-Latinx individuals to reconsider their use of the word Latinx, as well as the “Afro-” or “Black” label placed before it, and whether ethnicity itself is enough to identify with Latinidad (a term used to describe the “shared culture” of Latinxs).

“For those who embrace Latinidad, it’s a double-edged sword,” said Zaire Dinzey-Flores, a member of Black Latinas Know Collective and an associate professor of Latino and Caribbean Studies and Sociology at Rutgers University. “For those who don’t fit the image that has been boosted by this term [Latinx] and this concept [of Latinidad], it almost works as a violent term… toward those of us—and I’ll say us because I’ll include myself in that—who cannot exist outside of the violence of even the production of Latin America.”

Though some still view Latin Americans as a raceless group, a person’s social and economic positionality has always been determined by their racial makeup. The casta, a 16-tiered system showcased through paintings in the 18th century by the Spanish, established advancement based on race/racial mixture. The more European you were—or, in today’s terms, the closer your proximity to whiteness was— the higher you were in social ranking, leaving those of African descent at the bottom. Latin America’s casta system impacted all aspects of life, including marriage compatibility, access to education, and even the types of clothes one could wear; and the long-term effects are still being felt today in access to political positions, job opportunities, media airtime, and even health disparities.

It’s that deep-rooted history of anti-Blackness that makes Maika Moulite, co-author of Dear Haiti, Love Alaine, hesitant to identify as Latinx. “When we think of Latinx, it becomes synonymous with white,” said Moulite, 31, who identifies as Black Caribbean, and Haitian specifically. Because she has immense pride in her Blackness, opting to identify as Latinx can feel like she’s investing in a culture that doesn’t value her. For Moulite, her Miami upbringing and understanding of Haiti’s liberatory history as the first Black Republic, greatly informed the ways in which she identifies.

Dash Harris Machado, a 34-year-old who identifies as una mujer negra (a Black woman), refuses to entertain repetitive conversations on race in Latin America. As the filmmaker behind NEGRO: A Docu-Series About Latinx Identity, which she began producing 10 years ago, she has centered her work on Black Latin Americans, while also serving as co-founder of travel and culture resource AfroLatino Travel and one-third of the Black Central American educators Caña Negra. To her thinking: When U.S. Latinxs—many of whom are racialized as white, or mestizx—a mixed-race person of European and Indigenous ancestry, or mulattx—an individual of European and African ancestry—have an “awakening” that Latin Americans of African descent, or Afro-Latinx/Black Latinx in the U.S. context exist: It’s regressive at least, and violent at worst.

“I’m seeing a humongous gap [between what’s happening in Latin America and those speaking on race relations from the U.S.],” said Harris Machado, who was born in Brooklyn and resides in Panama. Whether co-facilitating “Anti-Blackness in the Latine Community ” or engaging in daily conversations, she finds some U.S.–based Latinxs dismissive when systemic racism in Latin America is brought up.

The allegiance to terms like Latinx, or the belief that Blackness is separate from the identifier, has caused some non-Black Latinxs to apply this to their conversations on Latin American identity. The “Latinxs for Black Lives” protest cry is one example: “You have so many people saying, ‘Oh, well, racism is different in Latin America versus the U.S.’ At the same time that people in the U.S. are saying, ‘Black Lives Matter,’ we’re saying, ‘Las Vidas Negras Importan,'” said Harris Machado. “At the same time that we’re demanding justice for North American Black people, in the same sentence, we’re saying Black people’s names that have been killed by state-sanctioned violence [in Latin America]. What part is different?”

Javier Wallace, 32, said the signifier “Afro-Latinx” was assigned to him by U.S. Latinxs when he returned to the states to begin his PhD program after spending six years in Panama. While there, everyone shared the same nationality; hence, his nationality nor ethnicity mattered in that space, his race, cisgender identity and size defined how he was treated by non-Black Panamanians. Wallace, an Austin, Texas native who was born to an African American mother and Black Panamanian father of West Indian descent, uses the term Afro-Latinx to demand his Blackness be centered in his personhood.

“The only reason why I use that language is because, for too long, [Latinidad has] been violent; not only ideologically, but physically manifests itself in our lives violently,” said the AfroLatino Travel co-founder, who has had guns pulled on him by police multiple times in Panama, which, given the criminalization of Black men, he believes is heavily linked to his race. “I just can’t allow that violence to continue to perpetuate, so I demand that people talk about us”—Black people—”when they talk about Latino [identity].”

The longstanding debate on how race figures into terminology around ethnicity predates “Latinx” entering the lexicon. “Hispanic”— used to describe descendants of a Spanish-speaking country—was established for political purposes in the 1970s when Latinx organizations, like ASPIRA and the Mexican-American Legal Defense and Education Fund, put pressure on the U.S. Census Bureau after the 1970 census undercounted Latinxs. The term emerged as a categorization on the 1980 census. It immediately sparked concern among some Latinxs that this umbrella term would be used to classify a multiethnic, multiracial, multinational demographic. Some preferred to be identified via nationality, or a hyphenated version of it, gravitating toward more specific identifiers like Chicano, (Afro) Taino, or (Afro) Boricua, to name a few. Not everyone favored a catchall term they felt they had no say in creating.

An attempt at a broader solution was “Latino/a,” which is commonly used to represent people across 33 Latin American and Caribbean countries, including non-Spanish speaking countries like Belize, Brazil, and Haiti, among others. Tracking the first use for Latino/a, is tricky, but, since it’s a more expansive term than Hispanic, it’s increased in popularity throughout the decades: Thirty years after Hispanic was coined, Latino was included in the 2000 census. Though gender-neutral terms like Latine or Latin@ emerged, Latinx, which began circulating online as early as 2004, has become a popular alternative (despite a recent Pew Research Center poll noting less than 25 percent of Latinxs have actually heard the term).

In a 2003 New York Times article, Mireya Navarro wrote that only two percent of Latinxs counted in the 2000 census identified themselves as Black. However, of those U.S. Latinxs, 28 percent, or more than 200,000, lived in New York City. Navarro attributes the large concentration to the migration of Caribbean Latinxs, many descendants of enslavement, to NYC.

Of the reported 10.7 million Africans taken to be enslaved and survived the Middle Passage, 388,000 arrived in what is now the U.S. But Brazil, which has the largest Black population outside of the continent of Africa, received 4.86 million enslaved Africans, and the others dispersed throughout the Caribbean and the remainder of North, Central, and South America. Today, roughly 130 million people of African descent live in Latin America, accounting for about a quarter of the total population, according to estimates from the Project on Ethnicity and Race in Latin America (PERLA). A 2014 Pew Research Center survey showed that one in four U.S. Latinxs identified as Afro-Latinx, Afro-Caribbean, or of African descent with roots in Latin America.

From the Civil Rights and Black Power movements to more recent times, Afro-Latinxs have reimagined their identities to zero in on the nuances of their lived experiences. In the pioneering text The Afro-Latin@ Reader: History and Culture in the United States, published in 2010, the late Miriam Jiménez Román and Juan Flores wrote, “Just as in Latin America, where the prefix ‘Afro-‘ has been critical in challenging the homogenizing effects of national and regional constructs, so in the United States the term ‘Afro-Latin@’ has surfaced as a way to signal racial, cultural, and socioeconomic contradictions within the overly vague idea of ‘Latin@.’”

Born on the island of Hispaniola, in the Dominican Republic, Danyeli Rodriguez Del Orbe, 25, prefers the term Afro-Dominican. The spoken-word artist and community organizer also refers to herself as a Black woman from the Dominican Republic. Like most Black Latinxs, other identifiers apply, like biracial Black woman, but she’s distanced herself from the term Afro-Latina, as it veers away from centering dark-skinned Black women—Rodriguez Del Orbe said that, in her awareness of her light-skinned privilege and positionality, she refuses to play into colorism.

Because Rodriguez Del Orbe believes that identity is fluid and ever-changing, the 25-year-old isn’t tied to terminology. Though she finds Latinx frustrating, Rodriguez Del Orbe understands its place. “There is a need to really question and interrogate what that term means, and how it has erased Indigenous and Black people from the conversation,” she said, “While at the same time understanding that right now—based on how the U.S. has used this term to distribute resources to ‘prioritize our communities’—that it is a term that is also needed politically, until those systems of, let’s say, resources or of representation start changing.”

Harris Machado laughs at the thought of personally investing in the term Latinx. “I’m not faulting anyone, because when you realize just how oppressive many elements of your identity is, it’s hard,” she said. “But, once you know it, there’s no way you can salvage it.”