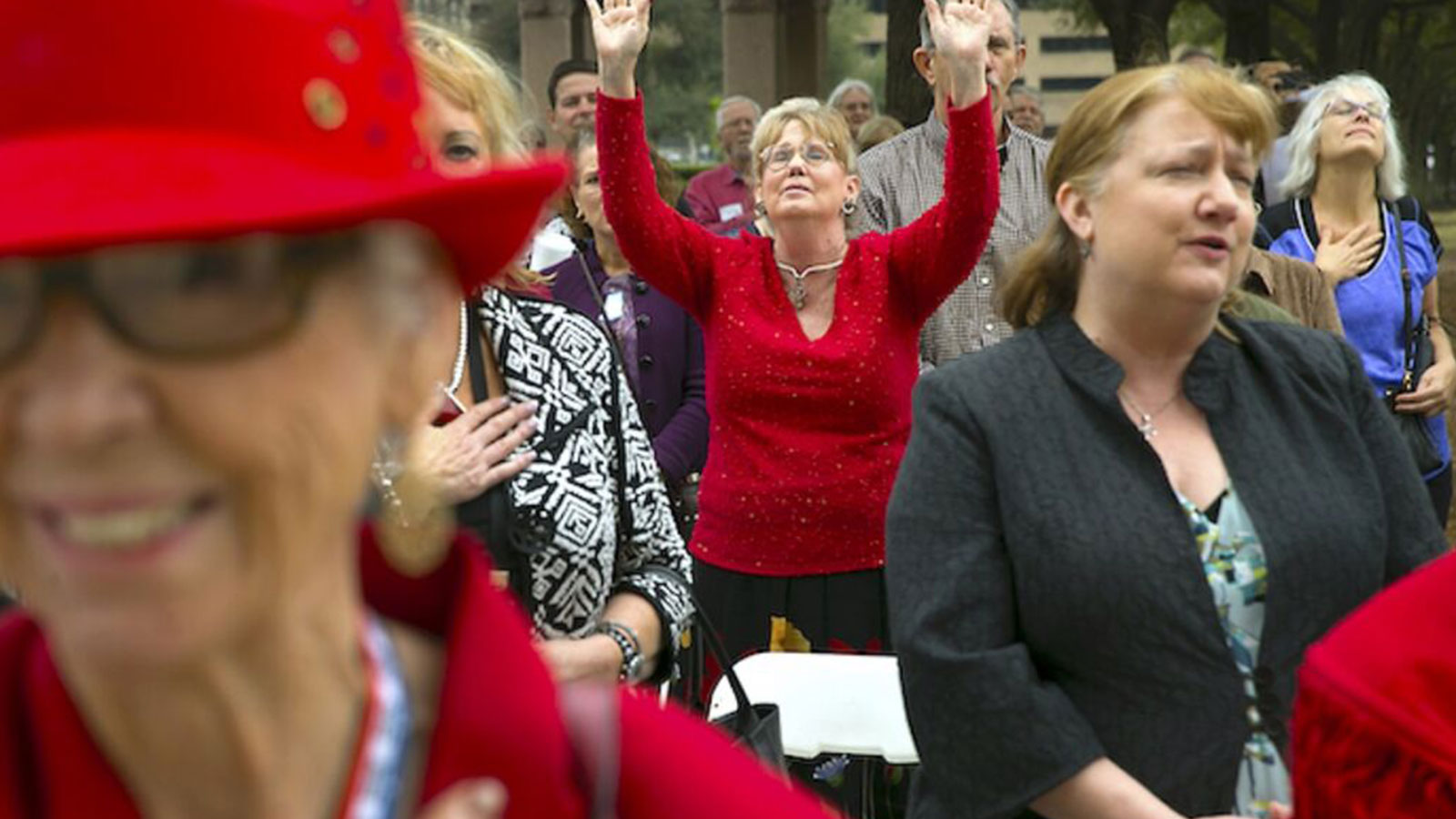 How Far Is White Supremacy Embedded in Christianity?

You Are Here: Home » Blog » Commentaries/Opinions » How Far Is White Supremacy Embedded in Christianity?

Robert P. Jones is CEO and founder of the Public Religion Research Institute (PRRI) and the author of two books, including last year’s much-discussed White Too Long: The Legacy of White Supremacy in Christian America, which just came out in paperback.

PRRI recently released a huge new survey that made headlines and drew commentary by pointing to a sharp decline in the proportion of Americans who identify as evangelical Christian. RD’s Peter Laarman reached out to Jones to talk about the dangers posed by recent shifts in religious identification. This interview is condensed for space reasons.

This interview has been edited for length and clarity.

Peter Laarman: You say in your book and in numerous interviews that there’s always been a tug-of-war between a broadly egalitarian and democratic strain in American religion and a broadly hierarchical and authoritarian strain, with white supremacy playing a central role on the anti-democratic side (while by no means not being absent on the good-guy side). We’ve certainly seen a strong authoritarian strain emerging in our politics. How is authoritarian religion fueling open contempt for democratic governance and the expressed willingness of many Republican state legislators to claim the right to override election results they don’t like?

This is all quite new—this reality of not being a majority white Christian country. We’ve gone from 54% white Christian to just 44% since Obama was first elected, or a drop of about 1% per year. Previous generations of white Christians had the convenience of being able to support participation for all, at least at the rhetorical level, because their dominance wasn’t under threat. Today the question is whether these Christians only support democracy in instrumental ways. And the answer we are getting from many quarters is that they were supportive of democracy as long as they were in charge.

So then it’s correct to assume that the rapidly declining percentage of white people who identify as born-again Christians does not actually spell the end of the story as far as political power and the health of civil society go? Looking at your data, Michelle Goldberg certainly doesn’t think the white evangelicals’ demographic decline marks the end of their ability to inflict harm. How do you assess their willingness to use anti-democratic means to achieve their ends?

The first thing to look at is how, at just 14.5% of the population, white evangelicals delivered about one-third of Trump’s support. 84% of them voted for Trump in 2020—that’s seven points above the 2016 level—so they are clearly punching well above their weight in a fair way, in a way that is consistent with democracy in that they are turning out at very high rates. And every group has this same right to participate, to show up. In 2016 white evangelicals made up 20% of the electorate with just over 16% of the population, and in 2020 they still had a 19% share of the vote even though they were down to around 14% of the population. That’s pretty impressive.

But there’s only so long you can keep this up, right? And knowing you have maxed out, you may start looking for ways to stop others from participating. Having poured your bucket of voters into the pool, you may want to keep others from putting their voters in. That’s where this real temptation to suppress the vote and pass restrictive voting laws comes from. They realize that they have fewer and fewer legitimate ways to win national elections. They can still win in state elections, of course, but even in evangelical strongholds like Texas and Georgia their numbers are dropping, and they know it.

Falling in line behind Trump’s Big Lie while attempting to restrict voting is really about trying to protect something that they feel like they own, which is the country. And we are seeing some clear signs that they may be willing to use whatever means necessary to protect that ownership.

Yes, because now it’s definitely not just about punching above their weight. They have these aggressive networks pushing state-level legislation, they have an even wilder dominionist theology, and they have this incredible unrelenting zeal…

We are certainly crossing over into something quite different with this overtly anti-democratic push. It’s new to us, but of course it’s also very old if we remember the Jim Crow methods to keep people from voting: various tests and poll taxes and the naked use of force to let white voters into polling places while keeping Black voters out.

OK, so now let’s talk a little about anointing and innocence and victimhood as factors in white evangelical behavior. If white Christians believe they are divinely anointed to rule and can always claim God-given innocence by virtue of this anointing, then for them democracy hardly matters and even violence is sanctified. What does the defense of white innocence have to do with the attacks on Critical Race Theory in the schools?

Here is where it’s worth remembering the Doctrine of Discovery and how it gave us the version of Christianity that landed on these shores—a version that was all about European dominion. The last papal edict concerning the Doctrine of Discovery was issued in 1493, and it’s no coincidence that the year sounds a bit familiar, coming right about the time that Columbus sailed the ocean blue. The Doctrine was set up to justify Spain’s claim to the Americas, and it explicitly states that European Christians have the right to dominate and subdue any non-Christian and non-white peoples they “encounter.”

It declares that they are free to conquer by any means necessary and with the full blessing of God, church, and king. And of course the idea here was that the benefits of bringing “civilization” to the New World, and Christianizing it, could outweigh any of the atrocities committed along the way. So that’s colonial Christianity, and we are still dealing with the legacy of that today. We are still in this long challenge of disentangling Christianity from overt dominionism and from the violence rooted in white supremacy.

What the assertions and attacks really amount to is that whites and especially white Christians are protecting themselves from the interrogation of a very troubling history, including the history we just talked about. And yes, this idea of protecting American innocence is really at the core of it. And you know there’s a great irony here. For a people who talk so much about sin and guilt, they simultaneously have this external insistence on their innocence. Heresy is a word that comes to mind.

Let’s try to end on a more positive note if we can. The egalitarian current in American religion seems to be doing okay, even gathering strength here and there. Your report suggests that the non-evangelical Protestant numbers are looking pretty good for a change. Talk about this and offer any insights you have about what’s going on. Is it just that the more conservative older ranks are thinning out?

Well, we’ve now got two years of very interesting data. We’d like to have three or four years, but still, we see this slight uptick among white people who self-identify as non-evangelical Protestants. And even measured in this way (i.e., by self identification, not by church membership rolls), this has been a group that’s been in decline for decades. And this is the first time we’ve seen it level off and even tick up a couple of points. As well, the median age of the non-evangelical Protestant segment is going down, whereas the median age of the white evangelicals is climbing rapidly. It’s pretty remarkable.

This could be a kind of opportunity for the mainline churches, although it’s not showing up in membership rolls yet. And to be clear: just because we see a shift in religious self-identification doesn’t mean they’re going to go sign up at their local Presbyterian church.

The generational shift is particularly worth noting, because the anti-gay, anti-immigrant, and anti-climate change stances of the evangelical groups are just so wildly out of step with what most people under age 50 believe. And the circumstantial evidence we have from these last two years seems to indicate that at least some of the younger people we’re talking about aren’t going over to the “no religion” corner when they leave white evangelicalism; they’re heading into the non-evangelical Christian corner, at least in terms of self identification. It’ll be interesting to see how it plays out.