How to Apologize for Slavery

You Are Here: Home » Commentaries/Opinions » How to Apologize for Slavery 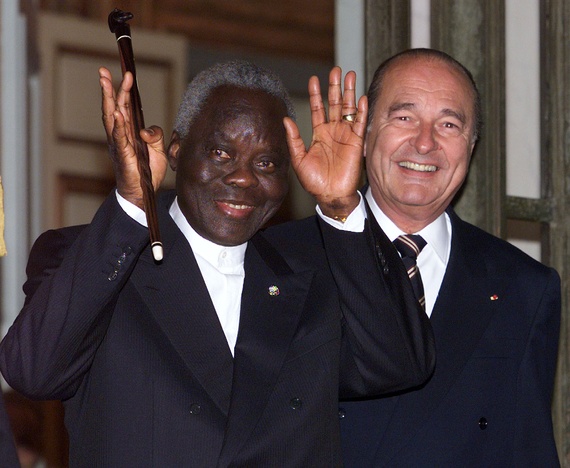 The “Door of No Return” at the House of Slaves museum on Goree Island, near Senegal’s capital Dakar (Finbarr O’Reilly/Reuters)

In June of 1961, Ambassador Malick Sow of the newly independent African nation of Chad was en route to Washington, D.C. to present his credentials to President John F. Kennedy and stopped for coffee at a diner on Maryland’s Route 40. The diner’s white female owner greeted him with the announcement that black people were not welcome there. When asked about the incident by Life magazine, she felt no need to apologize, explaining, “He looked like just an ordinary run-of-the-mill nigger to me. I couldn’t tell he was an ambassador.”

Sow’s experience was not unusual even for an ambassador. A string of similar incidents had already occurred along Route 40 as Jim Crow rolled out the unwelcome mat for African ambassadors traveling between New York and the nation’s capital. As the embarrassments accumulated, international observers saw duplicity in American claims of liberty and equality, as Cold War competition for influence in Africa made the continent a high priority for the U.S. and Soviet Union. Under the circumstances, the Kennedy administration was forced to offer an official apology to the many offended African ambassadors. Soon afterward, the president appointed a federal task force to enforce desegregation along Route 40.

But where international politics succeeded in securing an apology for the discrimination suffered by a handful of black African statesmen, more than 50 years later, black Americans still haven’t received a state apology for subjugation and discrimination at the hands of their own country. This is not because of some national stance against apologies. In 1988, for example, President Ronald Reagan signed legislation, complete with reparations, extending a formal apology for Japanese-American internment on American soil during World War II. In 1997, President Bill Clinton offered a presidential apology for the infamous Tuskegee syphilis study that the U.S. Public Health Service launched in the 1930s, to study the disease in hundreds of infected black men while falsely claiming to be providing them proper treatment. By contrast, congressional resolutions apologizing for slavery, passed separately by the House in 2008 and the Senate in 2009, were never reconciled or signed by the president. Far from constituting a state apology, they carry all the weight of resolutions passed to congratulate Super Bowl victors.

Ta-Nehisi Coates’s recent article in The Atlantic on “The Case for Reparations” has reignited the debate about the politics of American remorse and forgiveness for its treatment of black people. As Coates and many others have pointed out, reparations are not only—arguably not even mostly—about remuneration, but about unequivocally acknowledging the wrongs the state has inflicted on black people. They’re about apologizing.

In this context, Sow’s experience is instructive for what it reveals about international politics, state apologies, and racial discrimination. Social scientists who study these issues argue that apologizing is an essential component of reconciliation between an offending state and its victims. But apologizing on the state level entails real costs, just as it does on the individual level. In both cases, an apology signals a shift in the power dynamic between offender and victim in favor of the latter. Moreover, as Azuolas Bagdonas of Turkey’s Fatih University has written in a paper on the subject, state apologies “require changes in state identity. … [S]tates refuse to apologize when apologizing would significantly disrupt their self-narratives.” Given America’s narrative of freedom, self-determination, and success for all who work hard, apologizing for the intentional suppression of liberty forces the nation to confront the fundamental truth that we weren’t who we thought we were.

Given these costs, Kennedy apologized only because it would have been more costly not to, given U.S. hopes of preserving its position on a Cold War battleground. In other words, the apology to Sow and others came from a calculation of national interests. It did not arise from a sense of moral obligation—which would have mandated an apology to all black Americans, who had suffered far worse.

So what would it take for the U.S. to see an interest in apologizing for slavery?

The experience of several African countries is instructive here. Many West African nations have now acknowledged the role they played in the enslavement of black people in the Americas. Some have apologized on behalf of members of previous generations, who captured black men, women, and children from neighboring tribes and bartered their lives away to European slave traders. But they have offered or withheld apologies for different reasons.

Nigeria, Ghana, and Benin have taken different approaches to the question of apologizing for slavery. The resulting models reveal what interests might compel, or prevent, a U.S. apology for slavery, and how such an apology could get the buy-in of the American people.

If America were ever to apologize for slavery, Benin’s approach would be the most logical to follow.In Nigeria, some tribal leaders have taken the position that since slavery occurred long ago, the perpetrators of the crime own their sins and did not bequeath remorse to their descendants. In 2009, when Nigerian tribal chiefs sought a constitutional amendment formalizing their influential role in the country’s governance, the Civil Rights Congress of Nigeria, a human-rights organization, encouraged them to apologize for their role in the Atlantic slave trade. These efforts failed—in declining to apologize, one elder told a Nigerian newspaper that his people were “not apologetic about what happened in the past,” explaining that the slave trade was “very very legal” when his forebears were involved in it. Henry Bonsu, a broadcaster researching African apologies for slavery, told The Guardian at the time that among those he interviewed in Nigeria, “People aren’t milling around Lagos … moaning about why chiefs don’t apologise. They are more concerned about the everyday and why they still have bad governance.” Public opinion polls reflect this concern. The corruption watchdog Transparency International ranks Nigeria among the most corrupt countries worldwide; in 2013, 72 percent of Nigerian respondents to the NGO’s corruption-perception survey reported that the problem was getting much worse.

Ghana’s 2006 apology to African-Americans for slavery, by contrast, was largely a business decision. It formed part of a strategy to forge a stronger tourism economy, and closer ties to America, by making it easier for black Americans to visit, emigrate, own land, invest, and start businesses in Ghana. The initiative, called Project Joseph after the biblical character sold into slavery by his brothers, sought to portray Ghana to black Americans as Israel presents itself to the Jewish diaspora. Ghanaian tourism companies even offer “ceremony of apology” packages that black Americans can purchase to accompany visits to ancient slave castles. Explaining that healing and reconciliation would play a prominent role in the 50th-anniversary celebrations of the country’s independence in 2007, Emanuel Hagan of Ghana’s Ministry of Tourism and Diasporean Relations told a local news organization that the history of slavery was “something that we have to look straight in the face because it exists. So, we will want to say something went wrong, people made mistakes, but we are sorry for whatever happened.” And Ghana’s efforts worked. Around 10,000 black Americans visit the country every year, and around 3,000 now live in Ghana’s capital—triple the number estimated to have lived in the entire country in 2007.

Mathieu Kérékou, Benin’s former president, shown here with former French President Jacques Chirac, has been the most active among West African leaders in publicly apologizing for his nation’s culpability in the slave trade.Benin, too, apologized for its role in slavery, not only to African-Americans and the black diaspora, but also to the world. The apology coincided with then-President Mathieu Kérékou’s efforts to repair his, and Benin’s, international reputation after a series of corruption scandals that imperiled the country’s access to foreign aid money. In 1999, Kérékou began a global apology tour, including multiple stops in America. He and members of his government appealed to the religious conception of forgiveness to frame the act of reconciliation as a divine pursuit that would make whole the relationship between offending states and the victims’ offspring. “We cry forgiveness and reconciliation,” said Luc Gnacadja, Benin’s minister of environment and housing, on a visit to Virginia in 2000. “The slave trade is a shame, and we do repent for it.” Kérékou didn’t stop there. Benin also convened the Leaders’ Conference on Reconciliation and Development, where speakers from around the world, including two American congressmen, apologized for slavery. Benin’s initiative has been the most cited and revered state apology for slavery to date. And though the government’s motivation for its act of contrition was political, the spiritual terms in which the state delivered its apology lend it an element of sincerity that can’t be matched by other models.

If America were ever to apologize for slavery, Benin’s approach would be the most logical to follow. Not only does the model appeal to America’s deeply ingrained religious sensibilities, but it would cost taxpayers virtually nothing. As a result, such an endeavor might prove personally rewarding for citizens and politically palatable because it wouldn’t come across as a race-based entitlement. Most importantly, it would be a confession of wrong in service to a higher belief, and thus devoid of the normal interpersonal implications that attend apologies. Research has shown, as psychology professor Cindi May wrote in Scientific American, that “those who refuse to express remorse maintain a greater sense of control and feel better about themselves than those who take no action after making a mistake.”

Yet embracing the Benin method would require a political impetus for an apology to occur at all. A recent YouGov poll shows that 54 percent of Americans do not support a formal government apology for slavery, and another 18 percent are unsure. Further, 68 percent do not support reparations payments to descendants of slaves, and 57 percent don’t even support reparations in the form of education or job-training. For many Americans, like many Nigerians, the country is facing more pressing concerns than the ills of slavery or racism. Besides, as some thinking goes, voting in a black president twice must count for something.

Slavery itself did not end because of U.S. moral obligation or Lincoln’s sense of guilt, but because a large swath of the country felt it was in the nation’s strategic, and eventually military, interest to emancipate black people. It is not a coincidence that America’s chief European peers and rivals abolished slavery decades before the Civil War. Likewise, even Western nations’ prohibition on international slave-trading was a product of political and economic calculus, not born of moral imperative.

In 1961, after Kennedy apologized, a couple of black newspaper reporters decided to test the desegregation order along Route 40 and dressed as African ambassadors to see if they’d be accepted in the restaurants there. With some consternation from frustrated owners, they were served at each stop they made. However, they were disconcerted to learn that local black college students had been refused service as recently as the night before the reporters’ experiment.

The change, in other words, had only reached as far as the international politics and national interest required. Absent these catalysts for an American apology for slavery, even the power of spiritual reckoning will be insufficient to summon the nation to action.