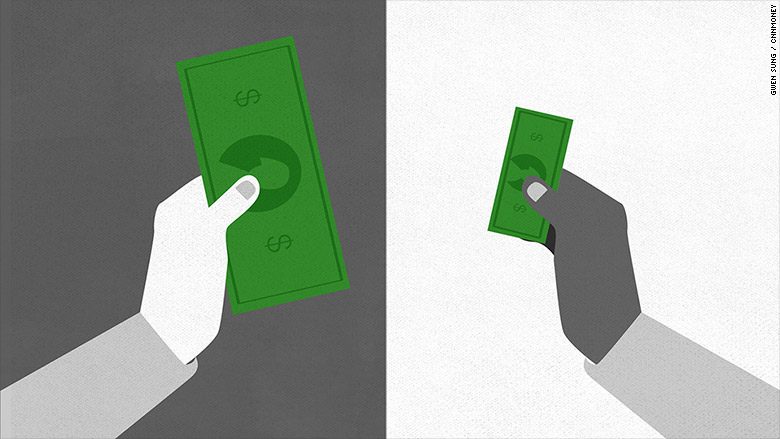 By Emily Moss, Kriston McIntosh, Wendy Edelberg, and Kristen E. Broady—
The COVID-19 pandemic has inflicted devastating effects on the U.S. economy, with job losses  especially concentrated among women, minorities, and low-wage workers. Economists have described the uneven and unequal economic recovery from the COVID-19 recession as a “K-shaped” recovery, characterized by divergent recovery trajectories for the affluent relative to those of less means. While considerable attention has been devoted to examining the preexisting disparities in labor market outcomes that left some households more vulnerable than others to the COVID-19 recession, less attention has been paid to the role of wealth in determining a household’s ability to buffer the pandemic’s economic shocks.

Wealth (defined as the difference between a household’s assets and debt) provides a critical safety net to households during economic downturns. Wealth holds several advantages over wages as an economic resource: In particular, income from wealth is taxed at much lower rates than income from work, and wealth can serve as a source of savings to absorb temporary setbacks such as a loss of employment income.

A previous Hamilton Project analysis revealed staggering inequalities in wealth held by white versus Black households. Using updated data from the Survey of Consumer Finances (SCF) for 2019, we find that the Black-white wealth gap persisted heading into the COVID-19 pandemic, leaving Black households with far fewer resources to weather the storm.

The Black-white wealth gap today is a continuation of decades-long trends in wealth inequality, as shown in figure 1. Over the past 30 years, the median wealth of white households has consistently dwarfed that of Black households—ranging from a gap of $106,900 in 1992 to $185,400 in 2007 (both adjusted for inflation to 2019 dollars). Furthermore: 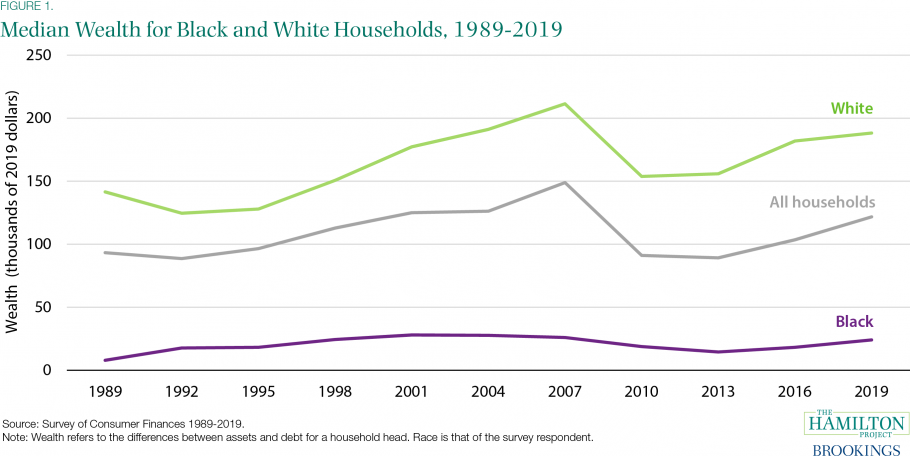 The ability of wealth to buffer economic shocks can provide critical support to households during economic downturns—yet not all households have equal holdings of wealth at their disposal. The Black-white wealth gap serves as an important factor in understanding how economic recoveries can become uneven and unequal across demographics. Black and white households both experienced a reduction in median wealth from 2007 to 2010 during the Great Recession. Despite white households holding higher levels of wealth than Black households throughout the Great Recession, the decline in median wealth for white and Black households was nearly equal during this period: the median white household experienced a 27 percent decline in wealth from 2007 to 2010 compared to a 28 percent decline for the median Black household (figure 1; authors’ calculations).

Yet in the aftermath of the Great Recession, white households began to recover the wealth they had lost: wealth for the median white household rose by 1 percent from 2010 to 2013. By contrast, wealth for the median Black household continued to fall—declining by 23 percent during this period (figure 1; authors’ calculations). These divergent changes in wealth in the years immediately following the Great Recession illustrate how recoveries from recessions do not necessarily benefit all households equally. In fact, the Great Recession exacerbated the Black-white wealth gap and left Black households more vulnerable to the current COVID-19 recession.

The Intersection of the Black-white and Gender Wealth Gaps

In addition to the Black-white wealth gap, a gender wealth gap (and its intersections with race) reveals another dimension of wealth inequality. We use microdata from the 2019 Survey of Consumer Finances (SCF) to analyze how the Black-white wealth gap varies by gender throughout the life cycle. Because the SCF is a household-level survey and the vast majority of householder respondents within married couples are men, our analyses involving gender are limited to single households. In single households, male and female respondents are each representative of their personal holdings of wealth. 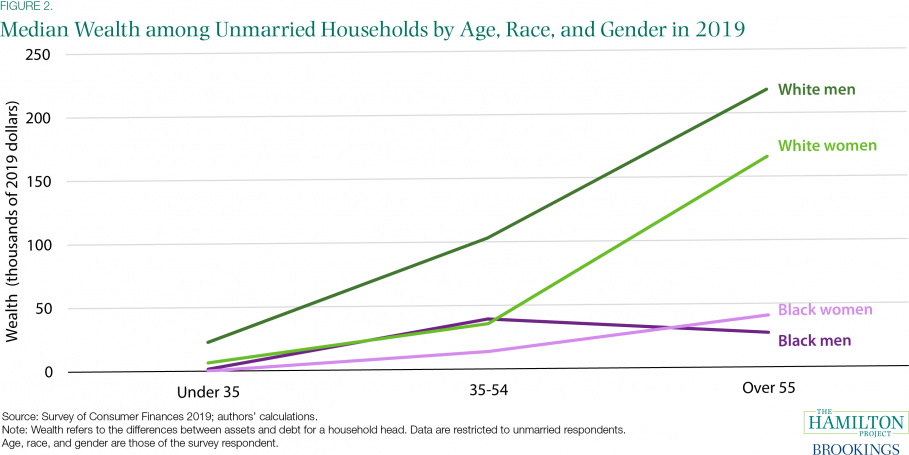 Evaluating wealth gaps by race as well as gender provides clear evidence of the relatively meager resources that women—Black women, in particular—have to withstand the economic shocks of the COVID-19 recession. Labor market data show how women have been hit particularly during the COVID-19 recession: of the 1.1 million people who left the labor market in September 2020, over 860,000 were women. Black women have faced especially large job losses; the share of Black women with a job decreased by 11.0 percentage points from February to April 2020 compared to a 9.9 percentage point reduction in the share of white women with a job and a 9.2 percentage point decline in the share of white men with a job.

It is important to note that these racial and gender wealth gaps cannot simply be attributed to differences in household savings patterns or cashflow management challenges; rather, they are the outcome of public policy decisions spanning centuries throughout U.S. history. For example, landmark progressive laws, ranging from the New Deal to the formation of Social Security, excluded many occupations (such as domestic workers) widely held by Black women—the majority of whom remain excluded from Social Security today. Accordingly, it is imperative to evaluate wealth gaps by both race and gender to fully understand the depth and breadth of continued wealth inequality in the U.S. today.

Racial disparities in wealth can intensify the severity of income shocks, as households with lower levels of wealth have fewer resources available to temper the adverse economic impacts of job loss. For Black households who have reported disproportionately high levels of unemployment—and even more so during the COVID-19 recession—this means the Black-white wealth gap can exacerbate the effects of the negative labor market outcomes that Black households are more likely to face.

When comparing the labor market distress of Black families relative to white families, it is important to consider trends in both unemployment and underemployment rates. Unemployment—the number of people who do not have a job and are actively seeking work—is a common indicator of labor market strength. However, an equally important measure is underemployment, defined as the number of people who currently work part-time but would rather have a full-time job and people who want and are able to take a job but have not sought work in the last four weeks. Underemployment can more broadly capture the share of the population that is ready and willing to work more if employers were hiring. 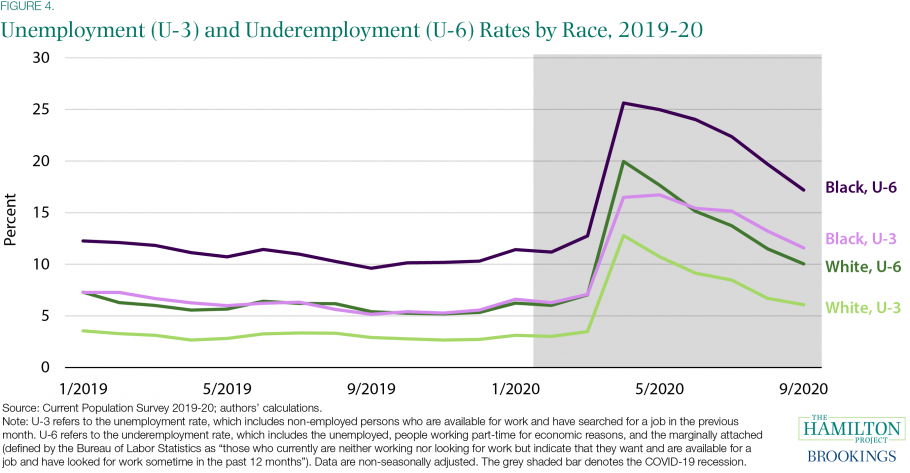 Racial disparities between Black and white households are present in holdings of nonliquid assets as well. In 2019, 73 percent of white families compared to 42 percent of Black families owned a home. Black families are not only less likely to own a home, but their homeownership also yields lower levels of assets. In 2019 the typical white families’ home value was $230,000 compared to $150,000 for Black families. Similarly, of the $30.8 trillion in total real estate assets reported in the second quarter of 2020, white households held 78 percent ($23.9 trillion) compared to 5 percent ($1.6 trillion) held by Black households.

With fewer nonliquid assets to borrow against or sell, Black households were particularly vulnerable to economic shocks heading into the COVID-19 pandemic. For some Black households, this has led to taking extraordinary measures to stay afloat. Leveraging data from the Survey of Household Economics and Decisionmaking (SHED) along with the SCF, we can observe how families have been utilizing their retirement assets to weather the COVID-19 recession.

In the short-term, renewed fiscal support is needed to curb the economic pain many households  are experiencing because they are unable to absorb the economic shocks of the COVID-19 recession. More specifically, policies aimed at providing income support and strengthening the safety net, along with implementing automatic stabilizers that trigger expansions of economic aid during fiscal crises, are critical during this time.

Yet while a stronger safety net and additional income support can provide families with immediate protection against economic crises, it is unlikely to provide them with the long-term stability to prepare for future shocks in the same way that wealth can. Accordingly, when designing policies to reduce the Black-white wealth gap, avoiding the conflation of income with wealth is imperative. In fact, our previous Hamilton Project analysis showed that the Black-white wealth gap remains even among households of similar incomes. Neither differences in income nor differences in educational attainment, indebtedness, or a host of other demographic and socioeconomic indicators can fully account for the persistence of the Black-white wealth gap.

Indeed, closing the Black-white wealth gap will require that the deep and systemic economic disparities brought about by centuries of discriminatory policies are addressed through significant structural changes across a range of policy areas. As discussed in a previous Hamilton Project analysis, these policies range from redlining and the denial of financial services to minority communities, to the Jim Crow Era’s “Black Codes” strictly limiting opportunities in many southern states—all of which contributed to the disproportionate accumulation of wealth held by white households while exacerbating the economic fragility of many Black households. Overcoming the effects of these policies will necessitate substantive and systemic changes in education, small business, healthcare, broadband access, tax reform, and broader place-based policies.

The COVID-19 pandemic underscores the importance of the Black-white wealth gap and its impact on the ability of households to weather the economic shocks caused by recessions. By expanding policymakers’ focus not only on strengthening the safety net and income supports, but also on the inclusion of systemic and structural public policy changes across a range of areas to close the Black-white wealth gap, disparities in the ability of Black and white households to weather the next economic storm will be greatly reduced.