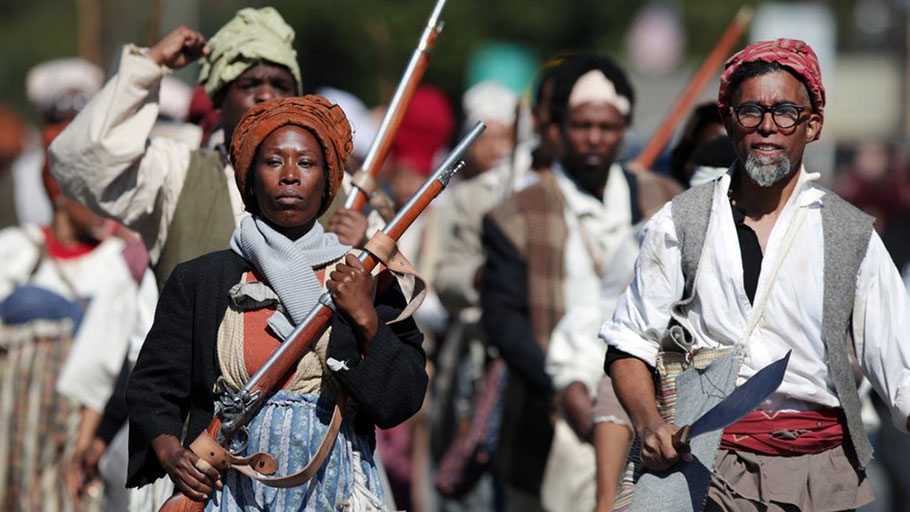 You Are Here: Home » Blog » Commentaries/Opinions » The Enduring Battle to Diversify Historical Reenactment

By Nick Martin, The New Republic –

Imagine, for a moment, you’re about eight years old, standing in a valley strewn with tiny hills. Your mother is nearby, trying to rope in your wandering little brother. Towering over you and milling about are dozens of older white men, silver in the beard and haggard in the face, antique rifles slung over their shoulders. They shuffle in and out of pristine leather tents. A bugle cuts through the air. Cast-iron pans clang and men shout. A few moments pass before a great boom—which you later learn came from an actual real-life cannon—shatters the morning air and sends your hands flying to your ears.

You don’t necessarily notice who wins, nor do you listen to the adults talking about the stakes of the fake fight. You notice briefly that there are only white men, not a single Native person, like you, or black person in sight. But there’s little fear in your heart as the canons continue to ring, the guns pop, and the men fall to their death on the battlefield: It’s all theater, entertainment smoothly tucked into the lesson plan—like the time your middle school teachers packed you into a bus to go watch a poorly staged Shakespeare performance.

Such was my experience attending Civil War reenactments in the South. My mother and grandfather, both history buffs, took me out to see these scenes. To me, a young Sappony kid plenty familiar with white Southern culture, it never felt radical or dangerous or harmful. There were scores of other families, like us, watching from the hillside. They brought the same folding chairs and snacks they’d take to little league baseball games and sat quietly as the battle raged. It seemed like the natural adult extension of my neighbors, friends, and brother acting out whatever movie we’d seen most recently in the backyard.

So why is it that when people with a bit more melanin in their skin decide to stage their own reenactments, it’s perceived as a threat?

The New York Times published a feature on Saturday exploring this very question. Over the course of two days this past weekend, roughly 300 black people outside of New Orleans marched 26 miles, retracing the steps of those who took part in the 1811 slave revolt known as the German Coast Uprising. The reenactors all dressed in era-appropriate wear, some on horseback, others brandishing prop machetes and muskets.

The crowd that took in their performance was small—one observer disappointingly noted to the Times that the participants far out-numbered their audience. Another thought more public outreach was needed, perhaps “some Oprah money.” But the most revealing quote appeared three-quarters of the way through the article.

“I think it’s authentic-looking,” Mike Remondet, a retired maintenance supervisor, said after he pedaled over to the plantation house on his bicycle. “I just hope it doesn’t create any turmoil with the races. We usually get along pretty well.”

It’s one quote, from one person. And yet it it’s consistent with how many people react to black history in the United States. And it illustrates assumptions that pervade every aspect and version of how America chooses to remember its younger self.

In 2010, Charleston, South Carolina held a “secession ball” in period dress, celebrating the creation of a white supremacist rebel state. The commander-in-chief of the Sons of Confederate Veterans, interviewed by The Guardian, insisted the affair was harmless: “We are not celebrating slavery, we are celebrating the courage and the tenacity of the people who were prepared to go out and defend their homes.” Similarly, monuments to those who defended slavery or segregation are still widely viewed as neutral, inoffensive. So it made perfect, infuriating sense last summer when, after protesters destructively but peacefully toppled a Confederate monument, North Carolina’s Democratic Governor Roy Cooper chided them not just for defacing public property, but for “violent” actions potentially threatening police “efforts to keep people safe.”

As a result of these versions of American history being deemed the acceptable version, in our pages and on our screens, in our schools and in fields full of hobbyists, reenactments of white supremacist history remain the norm. Meanwhile, depictions of non-white history—particularly when not edited or modified for the sensibilities of white audiences—still seem to startle. And so concessions are routinely made.

With few exceptions, Hollywood tends to soften its messages on slavery, the Jim Crow era, and the Civil Rights era for white audiences. The creators of the recent Harriet Tubman biopic, Harriet, have had to defend their decision to show a white man saving Harriet Tubman from a villainous black slave catcher. The moment, even as the white man remains an evil vengeful slaveowner, explores the innate complexity of humanity, the film’s defenders claim. Or was it for the comfort of white moviegoers and the ticket sales they bring? Such black slave catchers “were few and far between,” University of Connecticut historian Manisha Sinha told the History News Network in October—and far outnumbered by those “assisting fugitive slaves and in the abolitionist underground.”

Even when that history is laid bare, warts and all, especially Native history, the spotlight is rarely granted solely to the Native characters, and the storyteller is almost never from a Native community. David Grann’s hit book Killers of the Flower Moon, praised by all the right places, focused on the methodical murder of Osage Nation citizens by white businessmen in the 1920s for their oil-rich land. The tale, told with the cooperation of Osage Nation citizens, was framed as a classic detective story, featuring a white FBI agent who goes about unraveling the mysterious slayings of one family in particular. The final 70-odd pages then bring the reader into present day, where Grann, writing from the first-person, slowly discovers what in fact has been known to the Osage for generations—this history of an entire community being hunted by white industrialists and hustlers.

Martin Scorsese quickly bought the rights to direct the film and brought Leonardo DiCaprio and Robert De Niro along with him—white star power for a story about widespread Indigenous exploitation.

Amateur reenactment culture has always displayed this dynamic in particularly stark terms. Earlier this year, the infamous Oklahoma Land Rush, in which white settlers raced to claim parcels of land stolen by the federal government from Native nations, marked its 130th anniversary. The event has long been memorialized in Oklahoma schools by having children dress up as settlers (and some Native children as Native people of the time) and haul plastic wagons across the school field to stake their imaginary claims. The practice was not banned in Oklahoma City until 2014: After surveying Native students and parents about a practice encouraging white children to celebrate colonization, and Native children to effectively co-sign treaty violation, land theft, and genocide, the public schools made tentative steps towards an Oklahoma History Day without reenactments.

For children from communities of color, the live versions of history they are forced see growing up rarely tell the truth, let alone the whole truth. By the time they’re teenagers, equipped with the ability to peruse all the sections of the library and Wikipedia, their tongues bear permanent teeth-marks from having been bitten so many times. How many Thanksgiving school plays depicting, at best, a deeply unrepresentative depiction of Native-colonizer interactions did I have to sit through? How many construction-paper headdresses have I seen flop around? Will my (eventual) kid be forced to sit through the same ahistorical rituals and required to measure the history they are taught at home against the falsehoods they hear in school?

Hand-wringing over black people retracing a 26-mile walk in a slave rebellion is all the more remarkable given the repeated injuries and fatalities in much larger, higher-budget majority-white reenactments. In 1997, the pursuit of a perfectly authentic Antietam photograph set a woman on fire. In 2008, a 73-year-old former police officer was shot in the back re-creating trench warfare in Virginia. World War II fanatics have crashed archaic planes and killed dozens. That violence is apparently at least acceptable enough to allow further reenactments to proceed unimpeded—reenactments in the name of the right history. Reenacting slave rebellions, on the other hand, risks “turmoil.”

Diversifying all forms of historical reenactment, whether an amateur showing, a school activity, or a professionally produced motion picture, is clearly a step in the right direction. That’s why communities of color have been focusing on this for decades: It’s a chance to render erased histories visible in a particularly physical way, taking up space the people in these histories have long been denied, and becoming a source of pride for communities of color. It’s hard to imagine any rational, good-faith objection to that: After all, white reenactors have been claiming for decades that education and pride in history is the whole point.