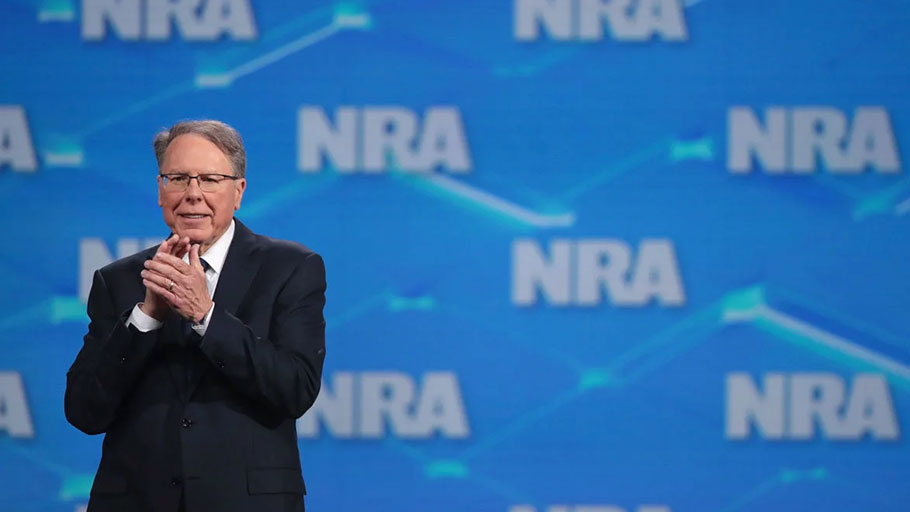 You Are Here: Home » Blog » Commentaries/Opinions » The NRA Is a Symptom of the Racism That Drives Violence in the United States

In the immediate aftermath of the massacres in Gilroy, El Paso and Dayton, Donald Trump actually began to contemplate doing a tiny sliver of the right thing. In doing so, he ran straight into the teeth of the Second Amendment, without doubt, the most lethally misunderstood corner of the U.S. Constitution.

On the Sunday after the attacks, Trump reached out to Democratic Sen. Joe Manchin and Republican Sen. Pat Toomey, whose co-sponsored 2013 bill to augment background checks after Sandy Hook was defeated by Republicans in the Senate despite overwhelming public support for the measure. Trump wanted to know if it could be revived if there was enough congressional support to see it through this time.

As Trump is still Trump, he started planning a Rose Garden signing ceremony before anyone had taken the cap off a drafting pen. Still, it was a move in a positive direction. The Manchin-Toomey bill, while not nearly perfect or sufficient to meet the amalgamated crises we call “gun violence,” would close the yawning loophole that allows weapon sales at gun shows and over the internet to take place without background checks.

To the shock and surprise of absolutely none, National Rifle Association (NRA) CEO Wayne LaPierre is comprehensively opposed to the Manchin-Toomey bill, just as he was opposed to it after Sandy Hook, just as he was opposed to Trump’s ban on bump stocks after the 2017 massacre in Las Vegas. On Tuesday, after Trump spoke briefly about strengthening background checks, LaPierre reached out and warned him that such a move “would not be popular” among his supporters, according to The Washington Post.

This is a recurring phenomenon for the puppet-in-chief: On the rare occasion that he leans toward doing something marginally positive, right-wing reactionaries rise up in high dudgeon to thwart it. When Trump dabbled with a plan to lower prescription drug prices, a good and not-unpopular idea, anti-tax activist Grover Norquist along with the American Conservative Union and other ultra-conservative groups went after him like he’d offered to sell the Marine Corps to Iran.

LaPierre’s warning does not appear to be grounded in fact. A Politico/Morning Consult poll taken in the immediate aftermath of last weekend’s attacks states, “55 percent of GOP voters were comfortable with banning assault weapons, and 54 percent said they would support stricter gun laws more generally. Ninety percent said they would back universal background checks for gun sales.” (Emphasis added.)

Seen through the prism of the El Paso shooter, LaPierre and the NRA’s absolutist stance in defense of that racist, archaic amendment is exposed for what it is: white supremacy in its most raw and weaponized form.

LaPierre and the NRA’s latest Second Amendment pushback is more than simply another example of a right-wing group seeking to defy popular will. The racism behind the El Paso shooting exposes the truth of their specific motivation. Combined with the NRA’s own gruesomely racist history, the group’s resistance represents the actions of an organization for which El Paso was the fulfillment of ultimate purpose: Arming white men against people of color.

“The real reason the Second Amendment was ratified, and why it says ‘State’ instead of ‘Country’ (the framers knew the difference — see the 10th Amendment), was to preserve the slave patrol militias in the southern states, which was necessary to get Virginia’s vote. Founders Patrick Henry, George Mason, and James Madison were totally clear on that,” wrote Thom Hartmann for Truthout in 2013, “and we all should be too.”

There had been a large number of slave uprisings in the years before the U.S. Constitution was ratified. Meanwhile, Black people outnumbered whites in vast areas of the South. Henry, Mason and James Monroe — Southerners all — were vigorous in their demand that the states be allowed to maintain armed militias in order to control their “property”: enslaved people. Without the support of these three men, Virginia would not endorse the Constitution, and without the Constitution, there would be no country.

Simply put, the Second Amendment was included in the Constitution to provide slaveowners with the means to defend themselves against the people they enslaved. “Henry, Mason and others wanted southern states to preserve their slave-patrol militias independent of the federal government,” concluded Hartmann. “So Madison changed the word ‘country’ to the word ‘state,’ and redrafted the Second Amendment into today’s form.”

Seen through the prism of the El Paso shooter — who wrote a blatantly racist manifesto denouncing an “invasion” by Latinos and then drove nearly 10 hours to kill as many of them as he could get in his gunsight — LaPierre and the NRA’s absolutist stance in defense of that racist, archaic amendment is exposed for what it is: white supremacy in its most raw and weaponized form.

The Second Amendment is about arming white men against communities of color, about white power brooking no challenge to its place in the hierarchy of society. That power has jealously and violently defended its ascendancy since the first uprising of enslaved people before this nation had a name. The Second Amendment has been its tool, and men like LaPierre have always been there to carry the banner and stoke fear.

“Gun violence” is more than headline-grabbing mass shootings by armed and armored spree killers. It is part of a larger continuum of physical, social and economic violence that overwhelmingly affects poor communities and communities of color. “Gun control” is a practically meaningless term in the face of the vast systemic changes required to confront and reform this crisis of injustice.

Wayne LaPierre is a symptom of the larger racist malady that has afflicted this nation since its inception.

“This Anglo man came here to kill Hispanics,” wrote El Paso County Sheriff Richard Wiles after the attack. “In this day and age, with all the serious issues we face, we are still confronted with people who will kill another for the sole reason of the color of their skin.”

Wayne LaPierre is a symptom of the larger racist malady that has afflicted this nation since its inception, and men like Trump and McConnell are gatekeepers of the white-power status quo.

Until the deep racist roots of this crisis are acknowledged, confronted and ultimately defeated, no place will be safe, and blood will continue to run in the streets, schools, homes, and churches. And until it is trashed or fundamentally reconceptualized, the slavery-inspired Second Amendment will make sure of that.