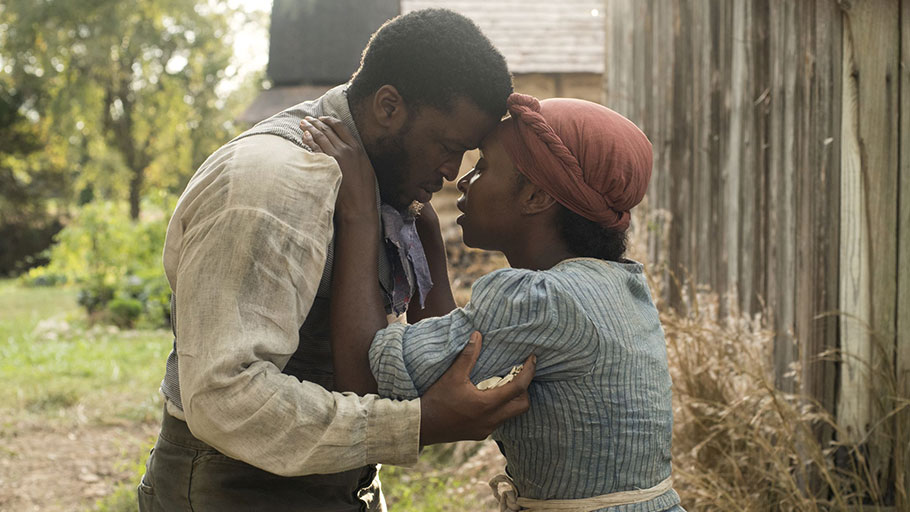 You Are Here: Home » Blog » Commentaries/Opinions » The Stunning Achievement of Kasi Lemmons’s “Harriet”

By Richard Brody, The New Yorker —

A common failure of movies, especially historical ones, is that they don’t open their drama to intellectual context or to the inner lives of their characters. Kasi Lemmons’s “Harriet” is a bold and accomplished exception: this bio-pic of Harriet Tubman develops her actions as a freer of enslaved people with ardent and detailed attention to the prophetic visions that impel her, and the intellectual and political currents, the widespread collective activity and the ideas that they embody, on which her anti-slavery activities inescapably depend. Yet the effect of this wide-ranging and deep-delving approach to an apparently straightforward and conventional narrative is gloriously paradoxical: far from dispersing the movie’s dramatic arc and energies, it focusses them. Far from diminishing its heroine’s ardent efforts, it magnifies them. In the process, the movie relates Tubman’s story, and the story of her times, with the exalted power of secular scripture.

It’s also, remarkably, a geographical drama, which does more than inscribe its action in distinctive landscapes and cityscapes: “Harriet” renders particular environments with dramatic characteristics, revealing some to be haunted and awaiting an exorcism, others to be sanctified and awaiting a consecration. With such mighty forces looming around and emanating from its protagonist, “Harriet” breaks out of the confines of its chronological span and its dramatic action to advance into the present day. Without dramatic anachronism or frame-breaking, the movie—written by Lemmons and Gregory Allen Howard—addresses more than the monstrous institution of slavery, which was officially ended in 1863. It also addresses the underlying presumption of white supremacy and its ongoing influence in American politics and culture.

“Harriet,” with cinematography by John Toll, begins with an incongruity and an atrocity: a pan shot over a lush and misty green landscape that features brown-gray wooden structures, unnaturally bare and brazenly unadorned—slave quarters, made by white overlords with conspicuous indifference to the barracks-like housing meant merely to warehouse those people they presume to own. There a woman lies, seemingly sleeping, on the bare earth: Araminta (Minty) Ross (Cynthia Erivo), an enslaved black woman who is in something like a trance, or having something like a seizure, in the course of which she has a vision, a memory of her sister being sold and dragged away from the quarters where they lived.

The setting is Bucktown, Maryland, in 1849. Minty has been given permission to marry the free black man John Tubman (Zackary Momoh). Now, after a Sunday service on the porch of the farm that’s led by a black preacher named Reverend Samuel Green (Vondie Curtis-Hall), Minty approaches her enslaver, Edward Brodess (Michael Marunde), with a claim: her mother had been promised freedom by his grandfather, and Minty saw a lawyer to enforce judgment in favor of her own freedom. He responds with rage, declaring that “a favorite slave is like a favorite pig,” says that he’ll never set her free, and threatens to sell her (which would separate her from her husband). Minty owes her relatively favored place in the Brodess farm to her religious fervor—her devoted and answered prayer for the recovery of the family’s scion, Gideon (Joe Alwyn), when he was gravely ill—but the horrific scars on her back and shoulder attest to the atrocities inflicted on her nonetheless.

Guided by her prophetic visions, Minty declares her intent in code, singing by night a song of farewell, with reference to a journey to the Promised Land and an escape from Pharaoh’s yoke, that holds a magnificent symbolic place in the movie; it’s a vision of cultural resistance and its elusive complexities. With its Biblical references, Minty’s song can “pass” in white society as abstractly beautiful and politically neutral, but for those who share her experience it’s a personal declaration, a collective affirmation, an act of revolt.

In the presence of the Brodesses, Rev. Green preached, to the enslaved black people held on that farm, a sermon of obedience and fervent service to their presumptive masters. He is, however, secretly a part of the Underground Railroad, and hides escapees in his church, offers counsel for their northward escape, and recommends them to trusted associates along the way. There’s a wonderful scene in which Minty visits her father (Clarke Peters), also a freeman, by night, to tell him of her plan to escape; he refuses to look at her (it’s not the last time that this will happen) so that, if interrogated by whites, he can truthfully deny that he had seen her. He also confers Minty to the counsel of the preacher, whose public exhortations to meek servility mask his daring activities.

Minty’s escape is harrowingly dramatic. Though it proved successful, the grievous dangers and high risks that she confronts shadow her successes with the menace of tragedy and reveal her efforts as a blend of purpose and chance—of a desperate fatalism that’s redeemed only by a confidence that’s bolstered both by an absolute sense of the justice of her effort as well as by her invocation of her own prophetic power. She uses that power openly, as a sort of deadly weapon against Brodess, as he and his posse pursue her. Once she gets out of Maryland and into Delaware, her flight involves the help of white sympathizers, ones who work with the Underground Railroad and even ones who don’t. Among the activists, one helps her get across the border to Pennsylvania (a Northern state, where slavery was barred) and advises her to head to Philadelphia and contact William Still (Leslie Odom, Jr.), of the Anti-Slavery Society.

Still, a black man, is both an activist and a historian. He asks Minty about her story; he keeps a volume of the stories of every escaped slave he encounters. (Still’s actual historical records have been published.) He asks whether she wants to take a new name (she takes Harriet, her mother’s first name, and Tubman, her husband’s family name); he elicits the story of the brutal beating by a master that put her in a coma for two months and left her, she says, with her power of prophetic vision. (The solemn account gives rise to a moment of humor: Still records her story with the added note: Possible brain damage.)

Harriet’s freedom, of course, is only the beginning. She intends to return to Maryland and help John and her other family members escape, and she does so in defiance of Still, who fears both for her safety and for the Railroad’s network, which would be jeopardized if she were to be captured. Crucially, the owner of the rooming house where she lives, Marie Buchanon (Janelle Monáe), prepares her for the journey—and for the series of journeys that she’ll undertake to help free others—by giving her a gun. In the course of her return trips to Bucktown, and despite her efforts to bring members of her family to freedom in the North, she endures agonizing separations. Yet her trips, which she undertakes disguised as a man, are crowned with success, and she becomes—anonymously—a subject of local myth and obsession among the white population, who hope to catch and punish “Moses the slave stealer,” the unknown person who has been depleting their properties’ population of slaves.

In “Harriet,” Lemmons examines the practice of slavery—including the financial and social interests of white enslavers. She dramatizes the role of paid black trackers (played by Omar J. Dorsey and Henry Hunter Hall) in slave owners’ efforts to capture escapees. She depicts, in a series of interactions of an appalling violence, the vast price paid by black people for the slightest display of independent action; her vision of a society of unchallenged and unquestioned white supremacy is terrifyingly totalitarian—including in the compromises for mere survival that it imposes on those who are its victims. A crucial turn in the drama is the passage, in 1850, of the Fugitive Slave Act, meant to placate the South, that unleashed a virtual army of bounty hunters in Northern cities and forced Tubman, Still, and other Railroad activists to leave Philadelphia and head farther North. Harriet moves to Canada, then joins Still at a meeting in Auburn, New York, with one of the state’s senators, William Seward, where, in a passionate speech, she rousingly reminds the gathered dignitaries of the physical and moral horrors of slavery and declares her intention of continuing her missions regardless of the dangers they entail.

At that gathering, Still far-sightedly notes that, ultimately, only a civil war would abolish slavery. Likened by many Maryland whites to Moses, Harriet is also compared, by the Brodess matriarch, Eliza (Jennifer Nettles), to Joan of Arc, and the martial metaphor is proved in action. Harriet doesn’t shrink from using the gun that Marie has provided. (There’s a notable moment when Harriet fords a river and holds the weapon high above her head to keep the powder dry.) What’s more, she envisions the Civil War and warns Gideon of the ruin and death that he will endure in the name of the “vice and vicious idea,” for “the sin of slavery”—and when her vision of war is realized, she’s at its forefront, training a regiment of black soldiers in the Union Army and leading them in a raid at the Combahee River, in South Carolina, that frees seven hundred and fifty people from slavery. It’s a raid that Harriet heralds, to those who would soon be freed, by raising her voice in song.

The wide-ranging and far-reaching vision of “Harriet” endows history with personal passions, deeply rooted in memory and in collective identity and experience, that fuse into an energizing and amplifying power. It’s a drama of a hero whose heroism depends crucially on that of others, of a prophet whose efforts would be empty without others of the faith, a warrior whose battles are part of a war fought by many. It’s one of the rare movies that joins the radical subjectivity of a visionary to the manifold and complex forces of the times, that fuses its story with the story of the writing of history itself, that unites the concepts of political and cultural freedom, that acknowledges the historical centrality of armed self-defense as a practical necessity and a moral right. It emphasizes the unredeemable atrocities and crimes that are minimized or even celebrated by today’s white supremacist, Confederacy nostalgists, and their political allies of convenience or ignorance. The taut dramatic arc of “Harriet” is built from the substance of complex and daring ideas.

Based on the thrilling and inspirational life of an iconic American freedom fighter, HARRIET tells the extraordinary tale of Harriet Tubman’s escape from slavery and transformation into one of America’s greatest heroes. Her courage, ingenuity, and tenacity freed hundreds of slaves and changed the course of history.

This article was originally published by The New Yorker.

Richard Brody began writing for The New Yorker in 1999. He writes about movies in his blog, The Front Row. He is the author of “Everything Is Cinema: The Working Life of Jean-Luc Godard.”