To Russia With Love: Why Southern U.S. Extremists Are Mad About Vladimir Putin

You Are Here: Home » Commentaries/Opinions » To Russia With Love: Why Southern U.S. Extremists Are Mad About Vladimir Putin 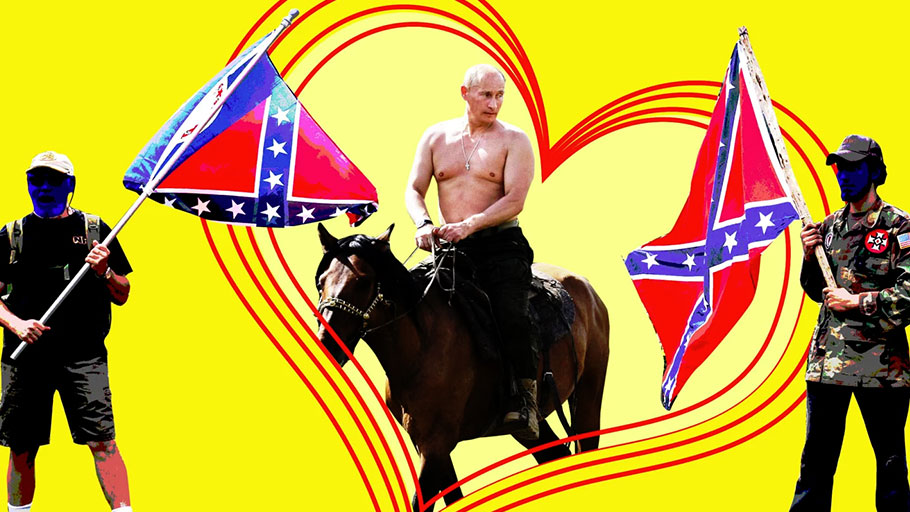 The League of the South hates black people, Jews, and lots of other people. But there’s one country, and one man, it really, really likes.

The League of the South, America’s leading neo-secessionist group, is a white supremacist organization that describes the Deep South as “White Man’s Land.” It speaks often of a coming race war, which its leader warns black people will surely lose. It hates Jews. It believes the antebellum South was a rare remnant of true Christianity in a godless world. It denounces egalitarianism as a “fatal heresy.” It openly embraces the Ku Klux Klan and other extremists.

And it really, really likes Russia.

A few weeks ago, the League made that crystal clear with the introduction of a new Russian-language section of its website. In an essay headlined “To Our Russian Friends,” League President Michael Hill—a former academic who started out as a relatively moderate Southern nationalist but now urges followers to arm themselves in preparation for civil war—spelled out the reasons why.

“We understand that the Russian people and Southerners are natural allies in blood, culture, and religion,” he wrote. “As fellow whites of northern European extraction, we come from the same general gene pool. As inheritors of the European cultural tradition, we share similar values, customs, and ways of life. And as Christians, we worship the same Lord and Savior, Jesus Christ, and our common faith binds us as brothers and sisters. … May the God of our Fathers bless our efforts to preserve our peoples and their shared faith and culture.”

Once, such a statement from an extreme-right group would have been blasphemous. After all, for the better part of a century, such groups saw the Soviet Union as the mother of all enemies—the orchestrator of the civil rights movement (which the John Birch Society said had “been deliberately and almost wholly created by the Communists”), and the conniving subverter of religion and morality and all that was good and right about America. Even today, the League denounces “the forces of godless international leftism” and “Judeo-Marxism.”

But like a rapidly growing proportion of the American radical right, along with its European extremist analogs, the League of the South admires Russia more and more with each passing day. The reason, in a name, is Vladimir Putin.

Russia under Putin, particularly since his third term as president began in 2012, has come to embody much of what the radical right aspires to. It is deeply nationalistic, authoritarian, and, increasingly, a defender of “traditional” values—values that include a new fondness for the conservative Russian Orthodox Church and also contempt for LGBT people and a pervasive denigration of women. And it is anti-globalist, arguing instead for what the far right calls “true diversity” (that is, nations that are homogeneous internally but starkly different from one another).

“An organization like the League of the South would not have existed in Russia even for one day. All its participants would be arrested for terrorism and spend at least 20 years in prison”

As The New York Times explained it in 2016, Putin has “mobilized faith to expand the country’s reach and influence. A fervent foe of homosexuality and any attempt to put individual rights above those of family, community or nation, the Russian Orthodox Church helps project Russia as the natural ally of all those who pine for a more secure, illiberal world free from the tradition-crushing onrush of globalization, multiculturalism and women’s and gay rights.”

It was in his third term that Putin began styling himself a “conservative.” In a remarkable 2013 speech quoted recently by scholar Anton Shekhovstov, Putin made his views clear as he criticized Western democracies for their liberalism.

“We can see how many of the Euro-Atlantic countries are actually rejecting their roots, including the Christian values that constitute the basis of Western civilization,” Putin claimed. “They are denying moral principles and all traditional identities: national, cultural, religious, and even sexual. They are implementing policies that equate large families with same-sex partnerships, belief in God with the belief in Satan. … It is no accident that today European politicians and public figures are increasingly talking about the failures of multiculturalism, and that they are not able to integrate … foreign cultural elements into their societies.”

Putin’s personal machismo, his trumpeting of the rights of the majority over those of minorities, his invasions of various neighbors and brutal repression of dissidents, also appeal to elements of the U.S. and European radical right.

Finally, at least in the minds of many American and European extremists, Russia is white—“fellow whites of northern European extraction,” as Hill put it. (That’s despite the fact that it is a remarkably multicultural nation, with some 200 minority ethnic groups, and only about 81 percent self-identifying as “Russian.”)

The radical right’s current fixation with Russia has roots, albeit slender ones, that go back more than half a century. In 1948, an American ideologue named Francis Parker Yockey wrote a book promoting pan-European fascism that saw the Soviet Union as less of a threat to Europe than the United States was. By the late 1950s, Yockey was suggesting the USSR could help “free” Europe from U.S. domination, according to Shekhovstov’s new book, Russia and the Western Far Right.

At the same time, Aleksandr Dugin, an extremist Russian ideologue, has long pushed the idea of “Eurasia,” a fascist empire that would result from an “anti-American revolution” and embody “the refusal to allow liberal values to dominate us.” Former Klan leader David Duke is one of many radicals who admire and have met with Dugin. Another Russian extremist even wrote the preface to the Russian-language edition of Duke’s Jewish Supremacism, a book that was long sold in the bookstore of the Duma, the lower house of the Russian national legislature.

The politics of contemporary Russia are certainly different than those of the Soviet Union. But it is wildly naïve, not to say densely stupid, for groups like the League to see it as a natural ally. It’s true that Russia has cultivated extreme-right links in Europe and the U.S., but it does so in a cynical, opportunistic way.

“American right-wing radicals oppose communism, but modern Russia actively propagates the Soviet past, its symbolism, the cult of the KGB and Stalin,” Kseniya Kirillova, a respected Russian journalist living in the U.S. who specializes in analyzing Russian propaganda and influence operations abroad, told me.

That’s not all. “Free carrying of weapons is unthinkable in Russia, any calls for separatism are punishable by imprisonment, and the police arrest people even for solitary protest actions,” Kirillova said. “An organization like the League of the South would not have existed in Russia even for one day. All its participants would be arrested for terrorism and spend at least 20 years in prison.”

But that undeniable reality hasn’t registered with the deep thinkers of the League of the South. To them, Russia is a God-fearing country of white people who are obvious allies in their battle against people of color, Muslims, LGBT people, immigrants, Yankees, and all the others League ideologues despise.

Prof. Lumumba Addresses Europe’s Influence and Interference on the Continent of Africa

Prof. Lumumba Addresses Europe’s Influence and Interference on the Continent of Africa
We Need Your Support — Donate, Share, Sign-Up Ways to Support