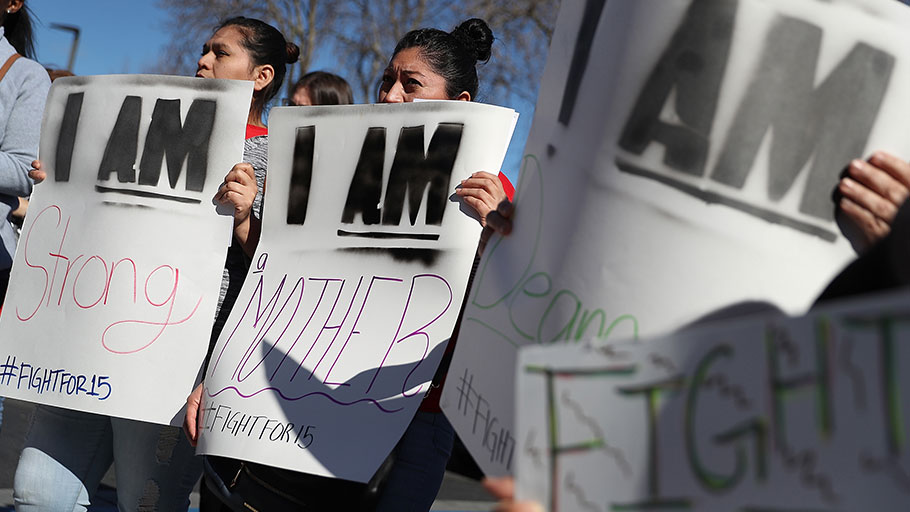 Fast food workers and union members carry signs as they stage a protest outside of a McDonald’s restaurant in Oakland, Calif., on Feb. 12, 2018, the 50th anniversary of the historic Memphis Sanitation Strike that was led by Dr. Martin Luther King Jr. Photo by Justin Sullivan, Getty Images.

Economic justice was always central to Martin Luther King Jr.’s agenda. But society has moved backward on that issue since his death.

When Memphis sanitation workers went on strike in 1968, Martin Luther King Jr. knew they had a lesson to teach America. “You are reminding the nation,” he told attendees at a March 1968 rally there, “that it is a crime for people to live in this rich nation and receive starvation wages … working on a full-time basis and a full-time job getting part-time income.”

Economic justice was not new to his agenda. Today, many people identify King with his soaring “I Have a Dream” rhetoric at the Lincoln Memorial in 1963. But what was his dream? The March on Washington sought equality before the law, but also an economic bill of rights for poor white, black and brown workers. He had constantly linked civil rights and labor and poor people’s movements; as far back as 1957, he condemned “the tragic inequalities of an economic system which takes necessities from the masses to give luxuries to the classes.”

He would be killed by an assassin less than three weeks after that Memphis speech. And what has happened to King’s dream? Trump Administration tax cuts have allowed the wealthiest Americans to pay a lower tax rate than the poorest, and multibillion-dollar companies like Amazon are often able to effectively avoid paying federal taxes. Worker and union rights established in the New Deal era are fading, and Census Bureau figures released last fall show that income inequality in the U.S. is at its highest level on record.

Today, nearly 40 million Americans remain poor, and a majority of students in many schools do not have enough to eat. A huge swath of working people of all incomes and occupations live paycheck to paycheck, aware that their jobs, their homes, their health care, their education and their families remain vulnerable to an economy that treats them as expenses to be eliminated rather than people to be cared for.

Memphis—the place King helped win union rights for sanitation workers, the place he died—is no exception. One-third of African Americans there lived in poverty in 2018, the year for which the most recent data is available. Most of the city’s public-school students need subsidized lunches, and black child-poverty rates are above 50%. Workers in expanding health care and service fields are stuck with low wages. Black political power has surged since King’s times, but black mayors won a “hollow prize,” as large Memphis employers like International Harvester, Firestone Tire and others closed their doors, undermining the largest group of the black middle class: unionized workers. Tax and budget cuts in the 1980s and again after the 2007–2008 financial meltdown destroyed budgets and crippled education. And though the police department is now “integrated,” police-community relations remain tense and often explosive.

ry that spends twice as much on health care as any other advanced nation, where “right to work” laws subvert unions, where gun violence is at epidemic levels, where greed overpowers concern for the earth, where the top 1% of earners own more wealth than 90% of the rest of us combined. Alas, it is all too familiar to most Middle Americans. Economic inequality is not a problem just for poor people and those historically oppressed by racial, class and gender inequality.

To address interrelated evils, King called for a revolution of values. He saw violence as not coming just from the barrel of a gun. Poverty is violence; unemployment is violence; lack of education and hope are violence. Non-violence, in contrast, seeks to appreciate and value the humanity and work of every person, and to build coalitions with all who seek a better life.

To his dying day, King saw a new dispensation of economic justice as attainable. On April 3, 1968, he told a mass meeting of sanitation strikers and their supporters to remember that “either we go up together or we go down together.” The next day he was killed, lending a retrospectively prescient aura to his most famous words that night: “I may not get there with you, but I want you to know tonight, that we as a people will get to the Promised Land!” More than a half-century later, that promised land of economic justice remains out of reach.

Michael K. Honey, a professor at the University of Washington Tacoma, is author of To the Promised Land: Martin Luther King and the Fight for Economic Justice.