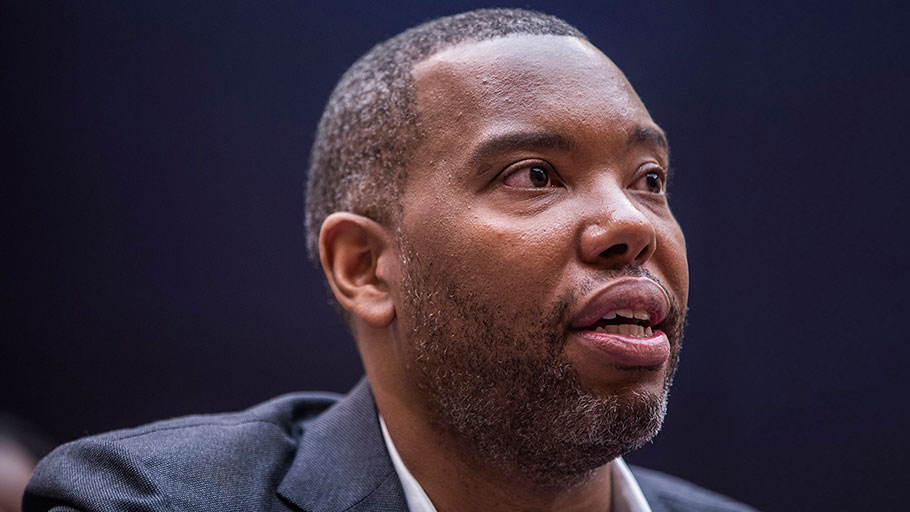 The Case for Reparations Is Nothing New

In fact, Black activists and civil rights leaders have been advocating for compensation for the trauma and cost of slavery for centuries.

In July 2019, thousands of Americans took to their television sets, phones, and laptops to watch Ta-Nehisi Coates, Danny Glover, and Cory Booker testify before Congress, demanding reparations for slavery. There was a time when this debate was on the fringes; now it was national. Today, close to a dozen presidential candidates have promised reparations if elected. National opinion on the matter has been polarized, however. And it isn’t just Americans that are tuning in.

When Danny Glover was introduced, it was not just as an award-winning actor, but as the chair of the board of directors for Trans-Africa, an organization representing Africans on the continent and in the diaspora. But not much was said about his nod to the CARICOM reparations commission, and its chairman, Hilary Beckles, who was also present. The Commission was set up by 12 Caribbean states to demand state-level reparations from countries that benefited from the enslavement of their ancestors.

In the Virgin Islands, many probably did notice the lack of emphasis on CARICOM. Before they were colonized by the U.S., the Virgin Islands were a slave colony belonging to Denmark. The Danish cultural historian Astrid Anderson has demonstrated how, under the leadership of the African Caribbean Reparations & Resettlement Alliance (ACRRA), the people of the Virgin Islands have been fighting for reparations for decades. This is likely why CARICOM has listed Denmark, among others, as a country that should pay reparations.

When ACRRA, the chief organization set up to demand reparations in the area, was formed, it was created in the presence of Glover’s predecessor in Trans-Africa, co-founder Randall Robinson. Also in attendance at the ACRRA inauguration was Queen Mother Dorothy Lewis, a co-founder of one of the principal organizations that brought the reparations agenda from the streets into the halls of power: The National Coalition of Blacks in North America. Why, some may ask, is Dorothy Lewis referred to as Queen Mother within the grassroots reparations movement? Her organization, N’Cobra, conferred the name on her in recognition of her walking in the footsteps of her ancestors. The name also acknowledges the work of Queen Mother Audley Moore, a key civil rights activist and pan-Africanist credited with founding the Reparations Committee for the Descendants of American Slaves, in 1963.

Lewis’ ancestors include women like the former slave Ms. Callie House (notably recognized as a pioneer in reparations, due in part to the ground-breaking research of the historian Mary Frances Berry). House founded the National Ex-Slave Mutual Relief, Bounty and Pension Association, one of the first organizations in the U.S. to demand reparations for slaves by those who had lived through the trauma.

If we can trace this line—from the chair that Danny Glover sat in to the colonies of the Virgin Islands and other Caribbean states—then we can draw two startling conclusions: First, contrary to public wisdom, the case for reparations was not invented by campaign strategists in the Democratic Party in 2016. Nor even in Ta-Nehisi Coates’ famous article for The Atlantic. It was “invented” by emancipated slaves themselves. No “statute of limitations,” in other words, can be used to dismiss a moral case that has never been dropped. The case is not new, and in the United States it started on the day after the Emancipation Proclamation, when the first slave demanded remuneration for all of the unpaid work they had done.

Second, even those skeptical souls who believe reparations to be a campaign ploy must concede that, before it reached the U.S. Congress, before it was preached by parliamentarians in the Caribbean, and before it was advocated by Chief Abiola, a Nigerian politician who would have become president had he not faced a coup, it was a demand made by ex-slaves. The demand has been kept alive by their activist descendants, chief among whom were black women. This has been the precise argument that exciting contemporary historical works, by scholars like Ana Lucia Araujo and Ashley Farmer, have honed in on.

There is little debate among most Americans that taxpayers ought to contribute for the memorialization of the past, through cemeteries, statues, museums, and parades. Who gets to be memorialized most definitely is a trigger for passionate debate, visible, for instance, in the battle over confederate statues. But memorialization itself is not controversial. 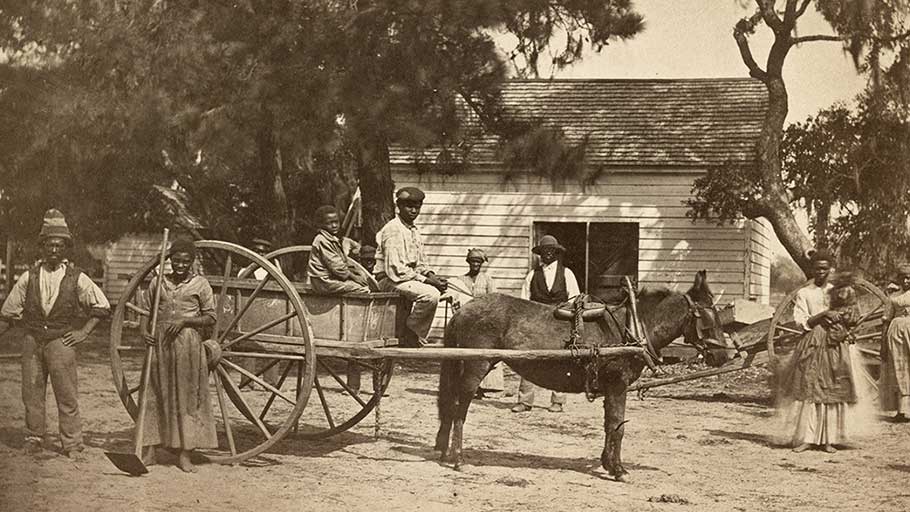 A group of African American slaves at the Cassina Point plantation of James Hopkinson on Edisto Island, South Carolina, 1862 via Wikimedia Commons.

Restitution, however, is. We can all agree, in other words, that we can reflect on the past, but not that we can right its wrongs. The lines of the debate have been predictable. One side passionately makes the moral and legal case. The other side says that they will not pay for crimes committed by people who are long dead. One side says reparations are due; the other asks where the historical line is drawn. Should Rome pay the UK? Should Japan pay Korea? Should Arab states pay for slavery too?

Occasionally someone may even remark that they shouldn’t pay reparations because they are the progeny of unfair circumstances themselves. They too can trace an ancestor who was wronged. If anybody deserves reparations, it is none other than them. In other words, there are three lines of rebuttal: (1) I wasn’t there when the crime happened. (2) I shouldn’t pay for decisions made by others in the past. (3) I myself am a descendant of the oppressed. It is unclear whether the boundaries of the debates will ever expand further than this.

Ultimately, however, reparations advocates have pointed to judicial precedents. When reparations have been paid, even those who took a moral stand against the injustice contributed. At some point, the Germans who resisted fascism contributed with their taxpayer money to German reparation payments for the victims of the Holocaust (and to the cash stimulus that played an important role in establishing Israel). Japan was also made to pay reparations, for war crimes committed in World War II, even those who found those crimes morally repugnant and did not commit any themselves. The U.S., in turn, paid reparations to the families of Japanese people it incarcerated in internment camps, even though many protested the existence of these concentration camps. Even direct collaborators with “the other side,” such as the secret British accomplice who may have provided donations and arms to the anti-colonial Mau Mau uprising, during the Kenyan war of Independence, contributed to the reparations that the United Kingdom paid to atone for the war crimes it committed against the Mau Mau.

While all of these cases of successful reparation payments happened within the lifetimes of those who footed the bill, citizens have also had to pay for decisions made before they were even born. Unfortunately, this has been true for both the oppressor and the oppressed. Debts from the past, both moral and monetary, cannot be so easily wished away.

In the twentieth and twenty-first centuries, many people have used their taxes to pay for debts incurred for payments awarded, not to the descendants of slaves, but to slave owners themselves. Two key moments, both of which happened in the Caribbean, and under the administration of David Cameron in the UK, underscore the entanglements within this debate.

The same year that Cameron visited Jamaica and told politicians demanding reparations to “move on” was the year that British taxpayers finished paying off the debt incurred from the abolition of slavery. This news was clumsily revealed—and subsequently deleted—in a tweet made by the Treasury in 2018. Forty percent of the national budget was used to pay “reparations” in 1833: not to the newly emancipated slaves, but to slave-owners (including David Cameron’s direct ancestors). Only in 2015 did Britain pay that money back. When this news was brought out to the open, belatedly, it wasn’t received very well, neither in the Caribbean nor at home. The chairman of the Reparations Commission, Hilary Beckles, was probably the most straightforward in his indignation: “we consider this to be a duplicity and public dishonesty.”

The story wasn’t unfamiliar to the people of Haiti, the first republic to be born out of a successful slave revolt. This origin was not without consequence: under Napoleon, France failed to re-establish slavery on the island. In the 1815 Congress of Vienna, undeterred, France negotiated a secret deal to secure “whatever means possible, including that of arms, to regain Saint-Domingue.” Finally, in 1825, the French diplomat Baron de Mackau came to Haiti with an ultimatum: either it would pay reparations for international recognition as an independent nation, or it would have to face the wrath of fourteen war ships that had 528 cannons in their arsenal. Haiti, of course, paid its former slave owners, and could add to its reputation: it was now also the first country to incur third world debt.

Haiti had little choice but to encourage a new form of patriotism. A proud Haitian citizen was one who contributed to paying off the debt incurred after the country was forced, by threat of war, to pay reparations to France. “In 1915,” writes the sociologist Jose Atiles-Osaria, “80% of the country’s budget was designated to repay the U.S. and French banks.” Haiti didn’t end up paying that debt until 1947, and according to Beckles, became bankrupt as a result.

Sojourner Truth, a former slave herself, once said, “America owes to my people some of the dividends. She can afford to pay and she must pay.” She spoke these words when she led a petition drive. She was ignored. “Somebody has to pay” was also the battle cry of Queen Mother Moore and Dara Abubakari, two key women who played central roles in bringing reparations to the agenda of black liberation activists in the mid-twentieth century.

Today, women like Professor Verene Shepherd at the University of the West Indies, demonstrate just how far this struggle has gone. She directs the Center for Reparations Research in the University of the West Indies, and is a member of the UN working group on the matter. She is also the leading historian at the forefront of building the case for reparations. In women like her, Sojourner Truth’s legacy lives on. What is for certain is that the twenty-first century has provided momentum to the global reparations movement, a movement that is neither new nor solely American.

This article was originally published by JSTOR Daily.