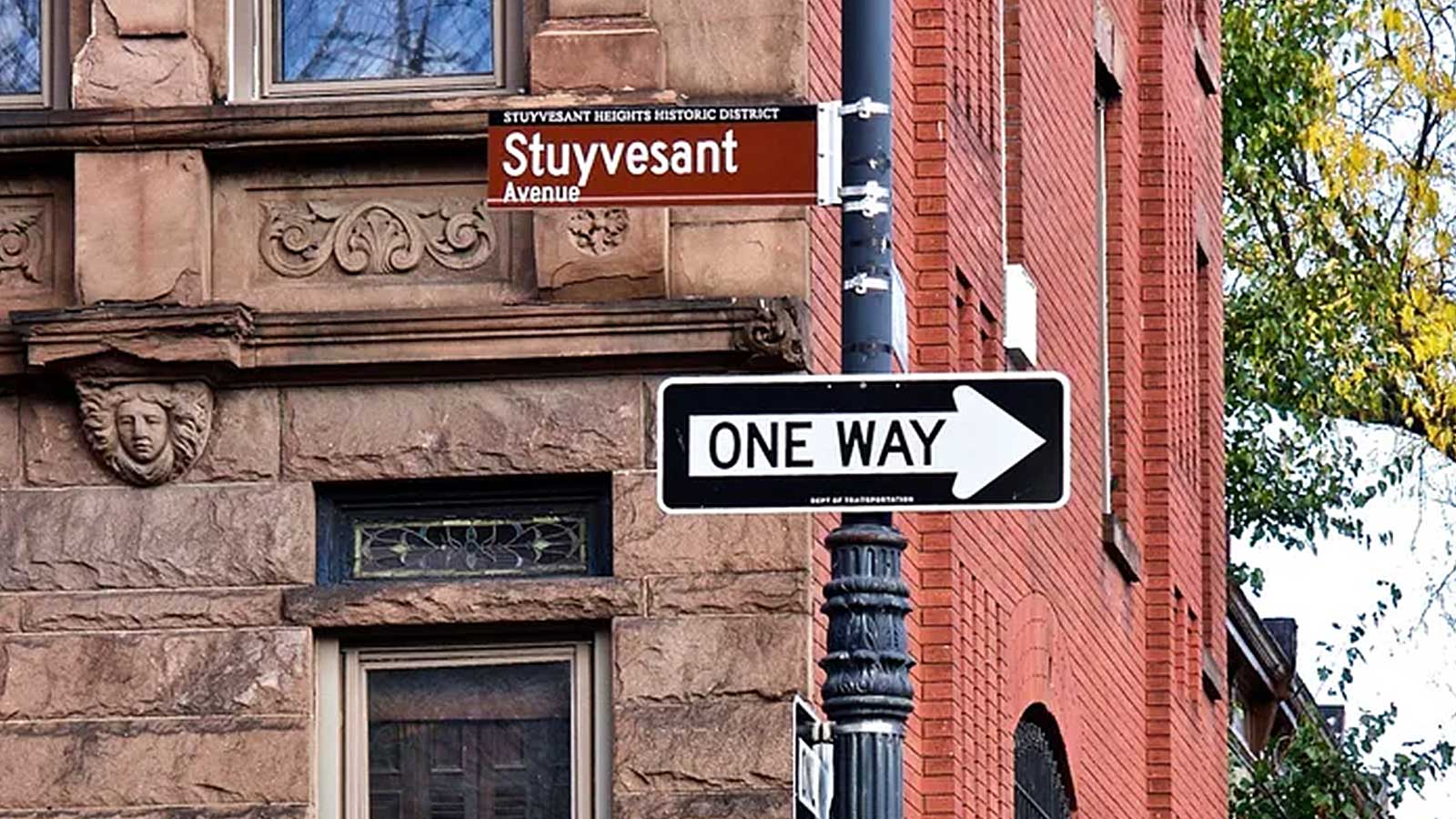 What would it take to strip New York City of slaveholders’ names?

You Are Here: Home » Blog » Commentaries/Opinions » What would it take to strip New York City of slaveholders’ names?

Hundreds of New York City’s streets, neighborhoods, parks, schools, and other sites are odes to individuals and families who bought and sold slaves in New York. Five of the mayoral candidates have committed to changing that. Here’s how that’d work.

Chances are you’ve strolled through Prospect Lefferts Gardens without a second thought to the Leffertses themselves. The family was one of the wealthiest and most influential in Brooklyn during the 19th century, with a patriarch who founded the borough’s first bank. They were fundamental in shaping the city — and they also enslaved 87 Black people in New York. The Lefferts name is among the hundreds attached to streets, neighborhoods, parks, schools, and other city sites, ingrained in our daily lives, that are odes to the individuals and families who bought and sold human beings in New York City. During a recent mayoral debate, five of the candidates committed to changing that, should they be elected. “We should not honor people that have had an abusive past,” said Eric Adams. Maya Wiley noted that “symbols matter.” But erasing the names of slavers from the cityscape is far more complicated than a simple mayoral decree. Altering whom the city celebrates on its street signs and in public places will require cutting through layers of procedural red tape, and even then, it probably isn’t possible to strip the city completely of its nods to New York slave owners.

Consider Peter Stuyvesant, the director general of the Dutch colony that gave rise to New York, who enslaved 15 to 30 people on his 62 acres in Manhattan. His name is everywhere: on the 24 Brooklyn blocks of Stuyvesant Avenue (running through Bedford-Stuyvesant, a predominantly Black neighborhood for most of the past century), on Stuyvesant High School, in Stuyvesant Square Park, on Stuyvesant Street in the East Village (where he lived and is buried), and at the privately owned Stuyvesant Town apartment complex. Peeling his name off each location would require its own, in some cases convoluted, multistep procedure.

The process of renaming a street, for instance, begins with a piece of City Council legislation. Approval from a local community board isn’t necessary, but gathering member signatures can help bring on lawmaker support. From there, the council evaluates the name change and considers feedback from those who live in the area, local lawmakers, and the general public. Thoroughfares like Nostrand Avenue or Beekman Street, respectively named for John van Nostrand and Henry Beekman — both of whom, census records show, owned slaves in 1790 — would stand to be rebranded. Proposals to rename neighborhoods — say, Boerum Hill, named for the Boerum family who owned 14 slaves — may similarly require council approval.

Changing the name of a school is trickier. It starts with a proposal submitted by the principal and reviewed by the local parent-teacher association. If they pass it, it’s circulated to the general public, after which the school district’s superintendent has to get onboard, then the local community education council. The Department of Education’s chancellor gets the final word. And changes have to be submitted by March 1 of the year before the change is to take effect (so a name change submitted March 1, 2021, wouldn’t go into effect until school starts in September 2022).

The names of private sites are beyond municipal reach. There’s no official procedure for demanding that someplace like Stuyvesant Town change its name. If it were to happen, it would almost surely be the result of community pressure and changing attitudes. The general manager of Stuyvesant Town–Peter Cooper Village did not answer questions about whether the complex would be open to a name change, instead saying that it “will always be a community that supports equity for all, and we have a zero-tolerance policy for racism or discrimination of any kind.” (Though that was decidedly not true in the development’s early years.)

The procedural can of worms aside, these sorts of revisions also tend to ignite a firestorm of opinions. Last year, hundreds of Confederate statues and other symbols linked with slavery were removed across the South. Many towns that tried to take them down faced legal challenges, and some remain in the courts: For example, a 2019 lawsuit has repeatedly delayed the removal of the statue of Confederate General Alfred Mouton in Lafayette, Louisiana. In some cases, municipal renaming efforts have been decided, then yanked back. In April, after months of debate, the San Francisco Board of Education scrapped a controversial plan to change the names of 44 schools honoring U.S. historical figures purportedly linked to white supremacy. (Some of the San Francisco decisions appeared under-researched and somewhat capricious.) Plans to potentially rename more than 100 streets in Asheville, North Carolina, have faced pushback amid the labor-intensive research to verify that a person a street is named for really did own slaves (common last names have led to uncertainty) and over the costs and logistics associated with changing signage, updating addresses, and rebranding businesses named for their thoroughfares. If you run Jackson Street Hardware, do you have to change your sign when Jackson Street is no longer Jackson Street?

While a wave of renamings under a new mayor is no more than a campaign promise at this point, the process of reassessing whom we choose to remember in our public spaces is already underway at NYC Parks, where naming is done largely at the discretion of the commissioner. In fact, the agency has already renamed 28 green spaces to honor the Black community. Among them was the Bronx’s Mullaly Park, which was originally named for John Mullaly. He’s widely thought of as the father of the borough’s parks network — and he was also an instigator of the New York City draft riots of 1863. More than 100 people died, and at least 19 Black men were lynched or beaten to death. The park was renamed for Reverend T. Wendell Foster, who was the first Black City Councilmember from the Bronx — just one of hundreds of New Yorkers who could have their contributions to the city celebrated in the place of slave owners.

Source: Curbed
Featured Image: Stuyvesant Avenue – Peter Stuyvesant served as the the director general of the Dutch colony that gave rise to New York; he also enslaved up to 30 people on his land in Manhattan. Photo: Sneaky Buddy/Shutterstock