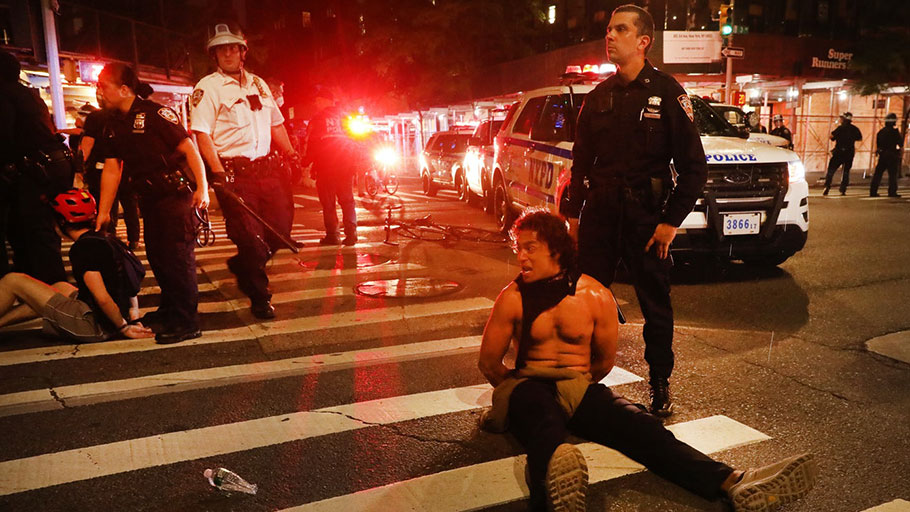 The roots of modern policing are steeped in a white supremacy from which none are immune.

By Audrey Farley, The New Republic —

Body-cam footage released in 2019, following a court order, shows Timpa pleading, “You’re gonna kill me! You’re gonna kill me!” and begging to be freed for nearly 14 minutes before falling unconscious. At that point, officers presumed he was sleeping and didn’t bother to check his pulse. Instead, they joked about his supposed imbecility. “It’s time for school. Wake up!” one officer said. Another replied, “I don’t want to go to school! Five more minutes, Mom!” Officers laughed about buying him new shoes for the first day and making him waffles for breakfast. Finally, after four minutes of Timpa being unresponsive, a medical responder began CPR. It was futile. An autopsy later confirmed sudden cardiac arrest due to “excessive physical restraint,” also citing cocaine and the narcotic Tramadol in Timpa’s system.

The tragic story is now making rounds on social media and conservative talk radio, as increasingly desperate critics of the Black Lives Matter attempt to rebut the widespread evidence that policing is a haven for institutional racism. With support for the BLM movement spiking across political groups, organizations like the NFL endorsing the cause, Paramount canceling its muscle-glorifying show COPS, and cities announcing plans to slash police budgets to fund needed social services, conservatives are more determined than ever to prove that Black Lives Matter is built on a lie. History, however, teaches a different lesson: The case that Black Lives Matter activists have been making—that America’s policing traditions are built upon a superstructure of enforcing and upholding white supremacy—is as true in Timpa’s instance as it is in the case of George Floyd.

Last month, Matt Walsh, host of The Matt Walsh Show on Ben Shapiro’s Daily Wire, appeared on Glenn Beck’s The Blaze to exploit Timpa’s death in the name of race-blind policing. He also touted the story of Daniel Shaver, an unarmed, intoxicated 26-year-old white pest-control worker who was fatally shot by a cop with an AR-15 rifle in a budget hotel, while lying prostrate on the ground in compliance with police orders. In Shaver’s case, the cops had been called after someone saw him with a pellet gun he used on the job.

On air, both Walsh and Beck marvel at the violence against the innocent white victims, which Walsh suggests and Beck insists is more offensive than the killing of the criminal George Floyd—not that they wanted to “make this into a racial scorecard thing,” as Walsh said at the outset of the discussion. They go on to conclude that police have a brutality problem, not a racial one. Walsh pointed to the higher incidence of white fatalities to support this view. While Walsh could hardly ignore the fact that whites vastly outnumber blacks in America’s population, he declared, “If it’s true that cops are racist, out hunting for black people to kill, which is what we’re told by BLM, you would not expect based on that theory to find out that there are twice as many white people killed by cops.” (Blacks make up only 13 percent of the population, while accounting for 26 percent of those fatally shot by police.)

Some beyond the conservative echo chamber agree the high incidence of white victims undermines Black Lives Matter messaging, even if not altogether disproving institutional racism in policing. About a week after the matter was discussed on The Blaze, journalist and Columbia professor John McWhorter shared Timpa’s story, adding that the “socioeconomic gap between blacks and whites is doubtless an important contributing factor” in the higher probability of blacks being brutalized by cops. Blacks are poorer and therefore more likely to commit crimes and live in neighborhoods where cops are routinely called, McWhorter, who is black, reasoned. A recent People Policy Project study substantiated the correlation between poverty and susceptibility to police violence but found that blacks are disproportionately subjected to police violence even after class is factored, with blacks in the wealthiest neighborhoods being killed by cops at nearly the same rate as whites in the poorest ones.

However counterintuitive it may seem, we shouldn’t rush to dismiss racial animus in police shootings like Timpa’s and those of impoverished whites for the following reason: Much state violence has been inflicted upon such marginalized white persons in the name of white supremacy. Mentally ill, substance-dependent, sexually “delinquent,” and poor whites have long been suspect in the eyes of the law, because such persons intensify anxieties about black and nonwhite “others” conquering the white race.

There may be no clearer example of this than in the case of eugenics, a still-reverberating set of pseudoscientific ideas that came to the fore in the early twentieth century, leading to tens of thousands of supposedly inferior whites being targeted for forcible sterilization and segregation. During the early decades of the movement, a mentally ill white man consuming pornography could easily find himself strapped to a table and under a knife for the simple reason that authorities feared the Nordic race was losing dominance. At the time, record numbers of Eastern Europeans were emigrating to the United States, and African Americans were migrating from Southern to Northern cities. Many progressives, including Presidents Woodrow Wilson and Teddy Roosevelt, feared these “undesirables” would soon overtake whites in number or otherwise pollute the gene pool, if officials didn’t intervene.

Under the mantle of strengthening the white race, authorities in many states began to sterilize defective whites (referred to as “waste humanity”), along with operating upon some people of color, prohibiting interracial marriage, and imposing stringent immigration restrictions. In other words, purging the weak and the “white trash” from their own ranks was an essential, though not exhaustive, part of keeping whites at the top of the social hierarchy.

A California eugenicist named Paul Popenoe, whose work inspired leaders of the Third Reich, suggested in 1928 that approximately 10 million Americans—then a tenth of the population—needed to be sterilized in order to eliminate “inherited” traits like poverty and criminality. While he and his peers didn’t come close to achieving this goal before critics revealed that the science underlying eugenics was incredibly slapdash, they managed to build upon the vice commissions and police forces established to control the white working class. For instance, they forced “feebleminded,” unemployed, substance-dependent, and gender-nonconforming whites into state homes.

As the century wore on, and particularly as African Americans gained civil rights, people of color supplanted whites as the primary targets of forced sterilization. (Following World War II, sterilizations also moved from state-run asylums to public hospitals, where doctors often took the liberty of sterilizing black women when they came in for other procedures.) But the state always kept questionable whites in view.

Today, an estimated 28 percent of white high school dropouts will be imprisoned in their lifetime. While some may presume these individuals commit more crimes than their more educated (and presumably wealthier) peers, others have observed law enforcement’s hyperattention to blue-collar crimes, such as shoplifting, and relative indifference to white-collar crimes, such as wage theft. Disabled whites are similarly over-policed.

The very fact that armed cops are the default responders in cases like Timpa’s suggests that the state’s primary prerogative is still to control, rather than to protect or support, those with mental illnesses. In New Hampshire, the only secure psychiatric unit (a ward for individuals deemed at high risk of violence) is located within a prison. In recent years, judges have involuntarily committed numerous young men with schizophrenia or schizoaffective disorder to this facility, where they are treated like inmates—photographed, forced to wear jumpsuits, and isolated for 23 hours a day. White college student Andrew Butler was incarcerated there, after local law enforcement found him running through the woods and punching trees while experiencing paranoia and hallucinations. He never hurt anyone or committed any crime.

This classist system of law enforcement, grown out of yesterday’s racism and xenophobia, is now compounded by the racial anxieties of the present—anxieties that Walsh and Beck want us to ignore. Curiously, the talk radio hosts comment on the “power trips” that so many cops apparently experience without bothering to ask why a profession dominated by white men is so plagued by crises of masculinity. They simply don’t probe why the officers in Timpa’s case felt compelled to taunt a mentally ill man, nor why Shaver’s killer etched into his assault rifle “You’re fucked.” Nor do they wonder why police officers abuse their family members at four times the rate of the general population.

Researchers have shed light on these questions, attributing to police culture a widespread perception that white men are losing their privilege as a result of the meaningful gains that people of color and women have made over the last few decades, and further finding that insecure masculinity is predictive of using excessive force and harassing vulnerable individuals. One need only watch a few episodes of the now-canceled COPS to observe this dynamic. The beloved reality show repeatedly depicts white officers making derogatory remarks about “alien” others, claiming to be victimized by women, and dominating trailer park whites with missing teeth, as well as minorities.

It’s hard not to see the same dynamic on the protester-filled streets, where officers are supporting armed vigilantes antagonizing protesters and beating white allies of black lives. The force inflicted upon such individuals as the 75-year-old Martin Gugino seems to suggest that if white poverty, disability, drug use, and sexual transgression have long threatened the vitality of whiteness, so, too, does white support of anti-racist causes.

Still, there may be an ounce of truth to Walsh and Beck’s exchange—that, in the context of police shootings, the media has given greater attention to black fatalities than white ones. While it’s not true that “no one cared” about Timpa’s death, as Beck claims (such outlets as The New York Times, CNN, and Slate covered the story), it is true that the press has circulated more stories of George Floyd and his peers than of Timpa or Shaver. Likewise, in an effort to prove that an institutional rot exists at the core of the criminal justice system, the media and many activists have emphasized modern policing’s slave patrol roots while saying little about its anti-working-class roots.

This is a shame, as state violence against black bodies and poor white bodies are two, equally instructive sides of the same coin. Far from undermining the case that reflexive anti-black racism exists in policing, the reality of systemic violence against marginalized whites offers a means to better understand how narrowly whiteness is still conceived, how far both institutions and individuals will go to protect it, and how badly we all need a police reform movement rooted in anti-racism, such as Black Lives Matter.

Audrey Farley is the author of the forthcoming book The Unfit Heiress: The Tragic Life and Scandalous Sterilization of Ann Cooper Hewitt.