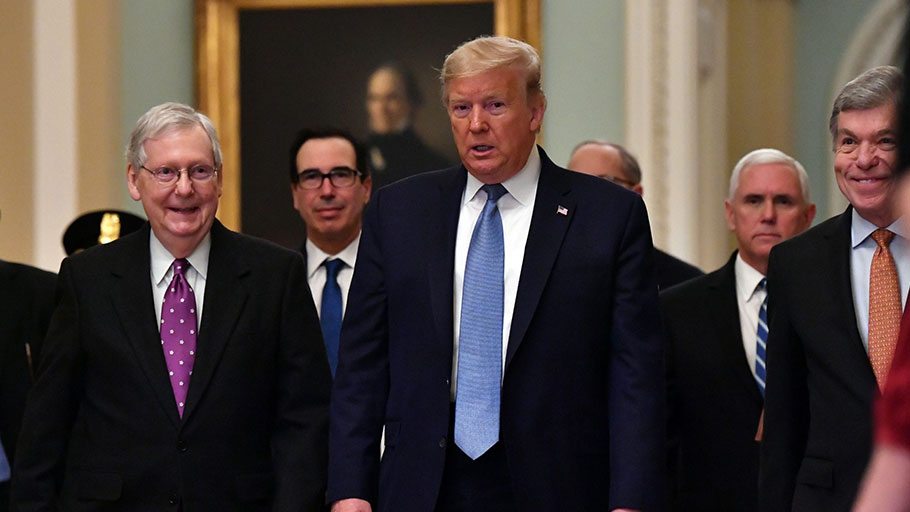 Will Trump and Mitch Really Show Workers and the Poor the COVID Money?

You Are Here: Home » Blog » Commentaries/Opinions » Will Trump and Mitch Really Show Workers and the Poor the COVID Money?

At a news conference, Trump went on record saying, “that would be OK with me.” What is “OK” with him is that the one to two trillion dollars in COVID-19 combat stimulus dollars won’t simply fatten the pockets of the banks and big business. He made the promise for a reason. The moment Trump and Senate Majority Leader Mitch McConnell said they’d fast track the COVID stimulus package the shout and the demand went up that this not be just another way to use a crisis to bail out the banks, corporations and the rich while the workers and the poor get next to nothing.

The howl immediately went up that there wasn’t much in it for workers and low-income persons. The even louder howl was that there be no money for stock buybacks, fattening corporate dividends and CEO bonuses, and no hoarding of the cash. Trump and McConnell at least on paper seemed to get that and tossed in an array of seemingly pro-worker measures: immediate cash payments, ramped up and extended unemployment insurance, illness related paid sick leave, MEDICAID payment for illness related to COVID, and no interest loans to small businesses many of the them minority owned. They have been slammed the hardest by forced employee layoffs and the plunge in customer sales and patronage.

However, even with the big promises that a big chunk of the money will go directly into the pockets of those who need help the most, and those always are workers and the poor, there are still huge cautionary warnings about who gets what and when. There is the history on this. Memories are still fresh about who got helped and who got shafted when the economy and the financial markets tanked in 2008. Th government shoved out billions to Wall Street and the major corporations during the crisis. They were the ones who caused the crash. Yet, they got the Lion’s share of the bail out funds. The thousands who suffered home loss, foreclosures, and massive job losses got almost nothing. In the decade after, worker’s income stagnated or dropped, health costs soared, and public employee unions virtually ceased to exist in many states. At the same time, the ranks of billionaires climbed to record highs.

Bernie Sanders and Elizabeth Warren continued to scream bloody economic murder and railed at warp speed about the hideous wealth inequality. Though millions agree with them, there was absolutely no budging McConnell and Trump to do anything about it. In fact, both eagerly accelerated the gap with their stupendous tax cut giveaway and capital gains slash to the uber wealthy, corporations and Wall Street.

There’s another warning. The relentless GOP assault on the Affordable Care Act sent the strong signal that there would be no give on their part to the millions of Blacks, Hispanics, and the poor who still suffer from the chronic lack of affordable and accessible health care. Days before COVID-19 hit Trump was still trying to get the courts to knock the Act down.

The ugly history of total neglect and the full-scale attack on the paltry government benefits to workers and the poor stirred civil rights leaders to demand that the bulk of the stimulus money go to those hardest hits. Trump’s vague promise that it would is hardly enough to reassure anyone that ultimately it will. In fact, it’s easy for Trump and McConnell to publicly waive around that they’ll give workers a couple thousand dollars. But then what?

There’s a partial answer and another warning about that from the 2008 Bush tax cut package. Workers got anywhere from $600 to $1200 in direct cash payments. Most recipients used the money to pay off debts. Fine. The problem was that small businesses got no return from this. There was no reconfigure of the measure that would have done far more to help workers long term. That was to extend and broaden unemployment insurance benefits. When the tax cut cash shelled out by the government was gone legions of workers were still unemployed with no financial resources to sustain them.

While the COVID cash to workers is welcome and needed, these are the dangling, what then questions. Will the money to pay for the free testing and treatment be placed directly in the hands of workers and community health care providers? Will the money to sustain unemployment pay-outs continue for the length of time needed? Will the loud promise of no evictions and foreclosures be enforced? Will the promise to expand medical care for workers and the poor continue after the crisis has passed?

Questions, questions for Trump and McConnell. Their answer will tell just how much both are really willing to show workers and the poor the money.