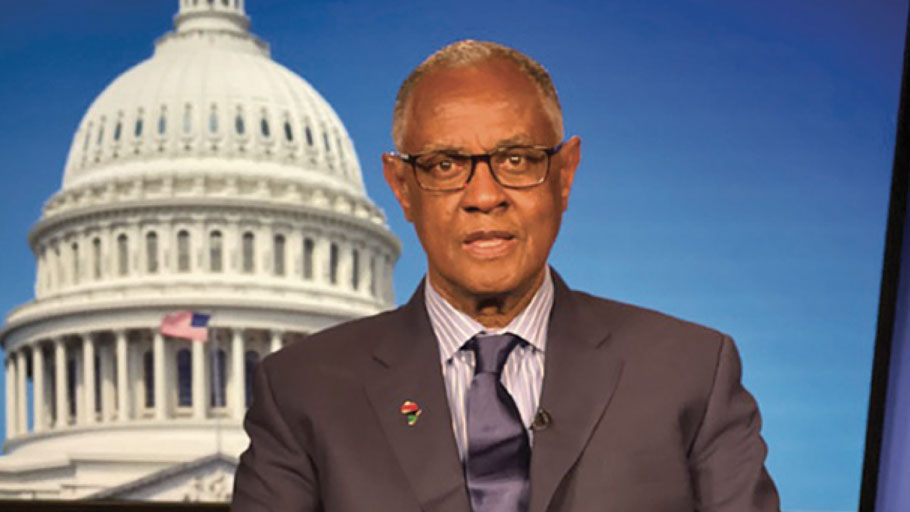 You Are Here: Home » Blog » Editors' Choice » CFA President Mel Foote — Africa Has Not Been A Priority Region For The Trump Administration

President Trump really has not had any discernible agenda for Africa, says Mel Foote.

Very little has been done by President Trump in articulating and fostering a concise African policy, says Mel Foote, President of the Washington DC, based Constituency for Africa. In addition to not paying a visit to Africa in his first term, the President’s utterances and actions have not been helpful in forging stronger ties with Africa, says Mr. Foote, a highly respected veteran of African Affairs in the Washington, DC circuit.

Fielding questions from PAV, Mr. Foote says the upcoming Presidential elections will have profound implications on how the U.S interacts with Africa and the rest of the world.

“Should Trump win re-election, we certainly should not expect anything of significance for Africa, and certainly no new initiatives. On the other hand, should Vice-President Biden win, we can certainly expect a stronger hand of friendship coming from the U.S., although the attention of President Biden will most certainly be on responding to the COVID-19 impact in the U.S,” says Mr. Foote.

“While clearly President Trump has not engaged much with African-Americans during these four years , African-Americans have not done well with the Democratic Party either as both sides routinely promise things in exchange for votes, but deliver little,” Mel Foote charged.

Still, the CFA leader believes that the African American vote could be decisive in swaying the election either way and for this to happen, their turnout must mirror 2008 levels when President Obama won the elections, Mr. Foote says.

Thanks for accepting to grant this interview, can we start with your assessment of the state of US-African relations?

Since assuming the Presidency of the United States, President Donald Trump has done very little to advance any significant U.S. – Africa policy agenda. He started off on the wrong foot, by insulting African countries, calling them “shithole countries”, and followed this up by putting African countries, including Nigeria on a list to restrict U.S. visas! The first lady Melania Trump visited Africa last year, but did not focus on any real substantive agenda, and there has been little or no follow-up.

What was the Trump agenda for Africa and what impact did it have on the traditional ties that the US has had with Africa?

President Trump really does not have any discernable agenda for Africa. The U.S. is only peripherally involved in major movements on the continent, i.e., the Continental Free Trade Agreement; efforts to respond to climate change on the continent; and efforts to respond to COVID-19. Having said that, the U.S. State Department has been helpful in the peaceful transition to democracy in Sudan. The US played a role in the peaceful elections in the DRC. The US seems to be on the right side in pressing for democratic reform and leadership change in Cameroon.

President Trump is wrapping up his first term of office with Africa been the only region he has not visited, what message does it send to the seriousness with which the US takes its ties with Africa?

Given all of the challenges the Trump administration is facing as it wraps up its first term, including the global COVID-19 pandemic, no one can expect President Trump to make a trip to Africa any time soon. In fact, for security reasons, the President is not able to travel to Europe, Canada, Asia or anywhere else, until such a time that a vaccine would be available! Most of the Africa-watchers in Washington, would have questioned his motives for making a trip to Africa anyways, given some of his rhetoric, and his abhorrent disregard and treatment of black people in Africa and here in the United States.

Elections are around the corner, what could be at stake for US-Africa relations come November?

The US Presidential Elections in November will certainly be important for Americans and for the entire world! Should Trump win re-election, we certainly should not expect anything of significance for Africa, and certainly no new initiatives. On the other hand, should Vice-President Biden win, we can certainly expect a stronger hand of friendship coming from the U.S., although the attention of President Biden will most certainly be on responding to the COVID-19 impact in the U.S.; putting Americans back to work; and getting the U.S. economy going again.

What guarding principles or recommendations do you have for African Americans in making their choice of who to vote in November?

African-Americans certainly are in position to determine the outcome of the elections, if we turn out to vote at the level of 2008, when Barack Obama won the election. The Trump re-election team is working hard to make it difficult for Black people to vote, and clearly want to limit the potential! While clearly President Trump has not engaged much with African Americans during these four years — African Americans have not done well with the Democratic Party either! Both sides routinely promise things in exchange for votes, but deliver little! Unfortunately, we can expect little to achieve for Africa and for African people, regardless of who is elected!

What do you make of the way Africa reacted to the recent murder of George Floyd?

With the advent of social media, the entire world witnessed to murder of George Floyd by Minneapolis, Minnesota police! While thousands of blacks have been systematically murdered by police across the United States, it has always been covered up, with police claiming that they were defending themselves and had to use lethal force! African immigrants have generally stayed out of the issue of police brutality, but increasingly are being caught up as the police are only seeing them as black people, and not as Ethiopians, Guineans, Nigerians, etc. The George Floyd murder reverberated across the world including across Africa! The African immigrant community also has been caught up in the global protest, and the Black Lives Matter movement.

The emotional responses from Africa during the George Floyd included calls from the Minister of Culture for aggrieved African Americans to come back “home,” what is it that African countries could do to build bridges to its diaspora?

Africa and African people are certainly coming to realize the potential of the African Diaspora, for remittances, for trade promotion, for tourism, etc.

Thus, the African Union’s launching of the Diaspora as the “Sixth Region”, in 2012! However, much work remains to be done in Africa and here in the Diaspora, to make this Sixth Region a functional reality. The biggest challenge is to how we can develop an “operational concept of unification”, that allows African-Americans, African immigrants, Afro-Latinos, Afro-Europeans, etc., to cooperate!

As we speak, the African Union Mission in Washington DC has gone without an Ambassador since October 2019 when Ambassador Arikana was recalled, what do you make of this?

We all applaud the tremendous effort of Ambassador Arikana Chihombori to engage the Diaspora, during her three years as the Permanent Representative to Washington. She was tireless in her approach, and did much to wake the Diaspora up to the possibilities in Africa! On the other hand, Ambassador Chihombori was clearly functioning as a part of the African Union Commission and operated under their organizational policies and procedures! She served at the pleasure of the AU Chairperson, and like all Ambassadors, was subject to recall for any reason as determined by the Chairperson. The African Union has an “Acting” Representative in place here in Washington, and given the COVID-19 pandemic, the AU is certainly suspending efforts for the time being, to formally fill Ambassadorships around the world! I do expect that the way Ambassador Chihombori departed the position, unfortunately will hurt efforts in the future for the AU to focus on African Diaspora issues and engagement. They will likely focus on bilateral issues with the U.S. government, and with institutions like the World Bank and IMF!

What plans does the Constituency For Africa that you lead have for the 2020 annual Ron Brown African Affairs Series?

The CFA 2020 Ronald H. Brown African Affairs Series will take place virtually, between September 12 – 19. The theme for the Series this year is, “Advocating for Africa in the Mist of the Pandemic”! While most of the Africa-focused organizations in the U.S. have disappeared, or have severely reduced their programming during the Coronavirus pandemic, CFA has clearly adjusted, and continues to respond to the call of Africa, albeit with minimum resources. In some respect the programming is even better today in that we have much better access with the use of ZOOM and other information technologies, to reach leaders across Africa, and throughout the Diaspora around the world! We are planning to release the agenda for the 2020 RHB Series next week.

Mel, we like to end with a last question on what is been done by you and other veterans of African advocacy in Washington ,DC, to ensure that there is continuity in the great work you have done for decades?

I am pleased to say that CFA has always prioritized preparing the next generation of leadership to support Africa. I recall my own experience in coming up, how the Black leaders at that time were not attuned to helping me or any of the up and coming folks, to prepare for leadership. One of my bosses told once told me when I went to him about career advice, “You must pull yourself up by your own bootstraps”! In other words, he was not going to do anything to help me to advance my career! I decided then and there that if I am ever in the position, I would take a much different approach to the next generation!

I am extremely proud of my role in the formulation of the Young African Leaders Initiative (YALI), that was launched by President Barack Obama, after he became President. President Obama sent an aide to see me late in 2008, and asked me to offer my thoughts on what approach the President could take in regards to Africa, in that when he arrived in office, the U.S. economy was in total freefall, we were fully engaged in fighting two wars (Iraq and Afghanistan), and he needed to spend his first year or so in fixing the economy and getting Americans back to work! He also followed George W. Bush in office. President Bush, despite his limited knowledge and interest in Africa, ended up being perhaps the most successful U.S. President in history in relationship to Africa, allocating $15 billion to respond to the HIV/AIDS pandemic, and $5 billion to launch the Millennium Challenge Corporation, which provided new development support for Africa.

President Obama wanted to show Africa that he, as a son of the continent, was indeed very much interested in the affairs of Africa, but he needed to spend his first year or so, fixing the monumental problems in the U.S. I wrote a paper for the President Obama, and suggested that he not spend his political capital trying to get African old tyrants to do the right thing, but focus his attention on the young, the up and coming generation, and preparing them for leadership! President Obama loved the idea, and went on to structure YALI!