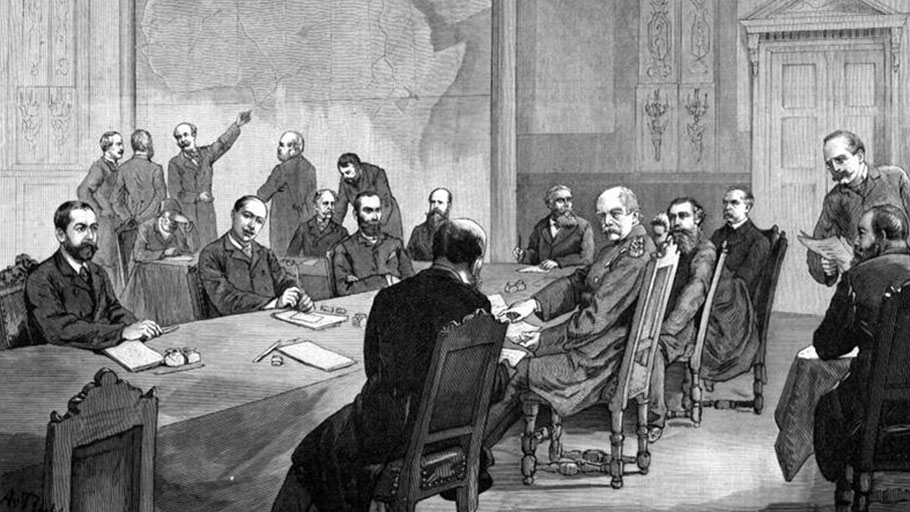 The conference of Berlin, as illustrated in ‘Illustrierte Zeitung’, 1884 (WikiCommons).

135 years ago today, European leaders sat around a horseshoe-shaped table to set the rules for Africa’s colonization.

On the afternoon of Saturday, November 15, 1884, an international conference was opened by the chancellor of the newly-created German Empire at his official residence on Wilhelmstrasse, in Berlin. Sat around a horseshoe-shaped table in a room overlooking the garden with representatives from every European country, apart from Switzerland, as well as those from the United States and the Ottoman Empire. The only clue as to the purpose of the November gathering of white men was hung on the wall – a large map of Africa “drooping down like a question mark” as Nigerian historian, Professor Godfrey Uzoigwe, would comment.

Including a short break for Christmas and the New Year, the West African Conference of Berlin would last 104 days, ending on February 26, 1885. In the 135 years since, the conference has come to represent the late 19th-century European Scramble and Partition of the continent. In the popular imagination, the delegates are hunched over a map, armed with rulers and pencils, sketching out national borders on the continent with no idea of what existed on the ground they were parcelling out. Yet this is mistaken. The Berlin Conference did not begin the scramble. That was well under way. Neither did it partition the continent. Only one state, the short-lived horror that was the Congo Free State, came out of it – though strictly speaking it was not actually a creation of the conference.

It did something much worse, though, with consequences that would reverberate across the years and be felt until today. It established the rules for the conquest and partition of Africa, in the process legitimising the ideas of Africa as a playground for outsiders, its mineral wealth as a resource for the outside world not for Africans and its fate as a matter not to be left to Africans.

From the very start, the conference laid out the order of priorities. “The Powers are in the presence of three interests: That of the commercial and industrial nations, which a common necessity compels to the research of new outlets. That of the States and of the Powers summoned to exercise over the regions of the Congo an authority which will have burdens corresponding to their rights. And, lastly, that which some generous voices have already commended to your solicitude – the interests of the native populations.” It also resolutely refused to consider the question of sovereignty, and the legitimacy of laying claim to someone else’s land and resources.

Uzoigwe notes that: “Bismarck … stated in his opening remarks that delegates had not been assembled to discuss matters of sovereignty either of African states or of the European powers in Africa.” It was no accident that there were no Africans at the table – their opinions were not considered necessary. The efforts of the Sultan of Zanzibar to get himself invited to the party were summarily laughed off by the British.

American journalist Daniel De Leon described the conference as “an event unique in the history of political science … Diplomatic in form, it was economic in fact.” And it is true that while it was dressed up as a humanitarian summit to look at the welfare of locals, its agenda was almost purely economic. Few on the continent or in the African diaspora were fooled. A week before it closed, the Lagos Observer declared that “the world had, perhaps, never witnessed a robbery on so large a scale.” Six years later, another editor of a Lagos newspaper comparing the legacy conference to the slave trade said: “A forcible possession of our land has taken the place of a forcible possession of our person.” Theodore Holly, the first black Protestant Episcopal Bishop in the US, condemned the delegates as having “come together to enact into law, national rapine, robbery and murder”.

The outcome of the conference was the General Act signed and ratified by all but one of the 14 nations at the table, the US being the sole exception. Some of its main features were the establishment of a regime of free trade stretching across the middle of Africa, the development of which became the rationale for the recognition of the Congo Free State and its subsequent 13-year horror, the abolition of the overland slave trade as well as the principle of “effective occupation”.

Though the attempt to create a free trade area in Africa and therefore keep the continent from becoming both a spark for, and a theatre of conflict between the European powers, was ultimately doomed. The principle of “effective occupation” was to become the catalyst for military conquest of the African continent with far-reaching consequences for its inhabitants.

At the time of the conference, 80 percent of Africa remained under traditional and local control. The Europeans only had influence on the coast. Following it, they started grabbing chunks of land inland, ultimately creating a hodgepodge of geometric boundaries that was superimposed over indigenous cultures and regions of Africa. However, to get their claims over African land accepted, European states had to demonstrate that they could actually administer the area.

Often, military victory proved to be the easy part. To govern, they found they had to contend with a confusing milieu of fluid identities and cultures and languages. The Europeans thus set about reorganising Africans into units they could understand and control. As Professor Terence Ranger noted, the colonial period was marked “by systematic inventions of African traditions – ethnicity, customary law, ‘traditional’ religion. Before colonialism Africa was characterised by pluralism, flexibility, multiple identity; after it, African identities of ‘tribe’, gender and generation were all bounded by the rigidities of invented tradition.”

That first-ever international conference on Africa established a template for how the world deals with the continent. Today, Africa is still seen primarily as a source for raw materials for the outside world and an arena for them to compete over. Conferences about the continent are rarely held on the continent itself and rarely care about the views of ordinary Africans.

The sight of African heads of state assembling in foreign capitals to beg for favours is a re-enactment of the Sultan of Zanzibar’s pleading to attend a conference where he would be the main course.

Despite achieving independence for the most part in the 1950s and 1960s, many African countries have continued along the destructive path laid out in Berlin. Former Tanzanian President Julius Nyerere declared: “We have artificial ‘nations’ carved out at the Berlin Conference in 1884, and today we are struggling to build these nations into stable units of human society… we are in danger of becoming the most Balkanised continent of the world.” Ethnicity and tribalism continue to be the bane of African politics. “The Berlin Conference was Africa’s undoing in more ways than one,” wrote Jan Nijman, Peter Muller and Harm de Blij in their book, Geography: Realms, Regions, and Concepts. “The colonial powers superimposed their domains on the African continent. By the time independence returned to Africa… the realm had acquired a legacy of political fragmentation that could neither be eliminated nor made to operate satisfactorily.”

Now, 135 years after Berlin, it is perhaps time for introspection. While it is impossible to turn back the clock, Africans would do well to reflect on what has happened since. Teaching the real history of the subjugation of the continent would help counter the myths of “ancient hatreds” that are said to fuel the conflicts on the continent. And Africans could decide to get together on the continent to debate and decide on the relationship they want with the rest of the world rather than always having that dictated to them from abroad.

This article was originally published By Al Jazeera.