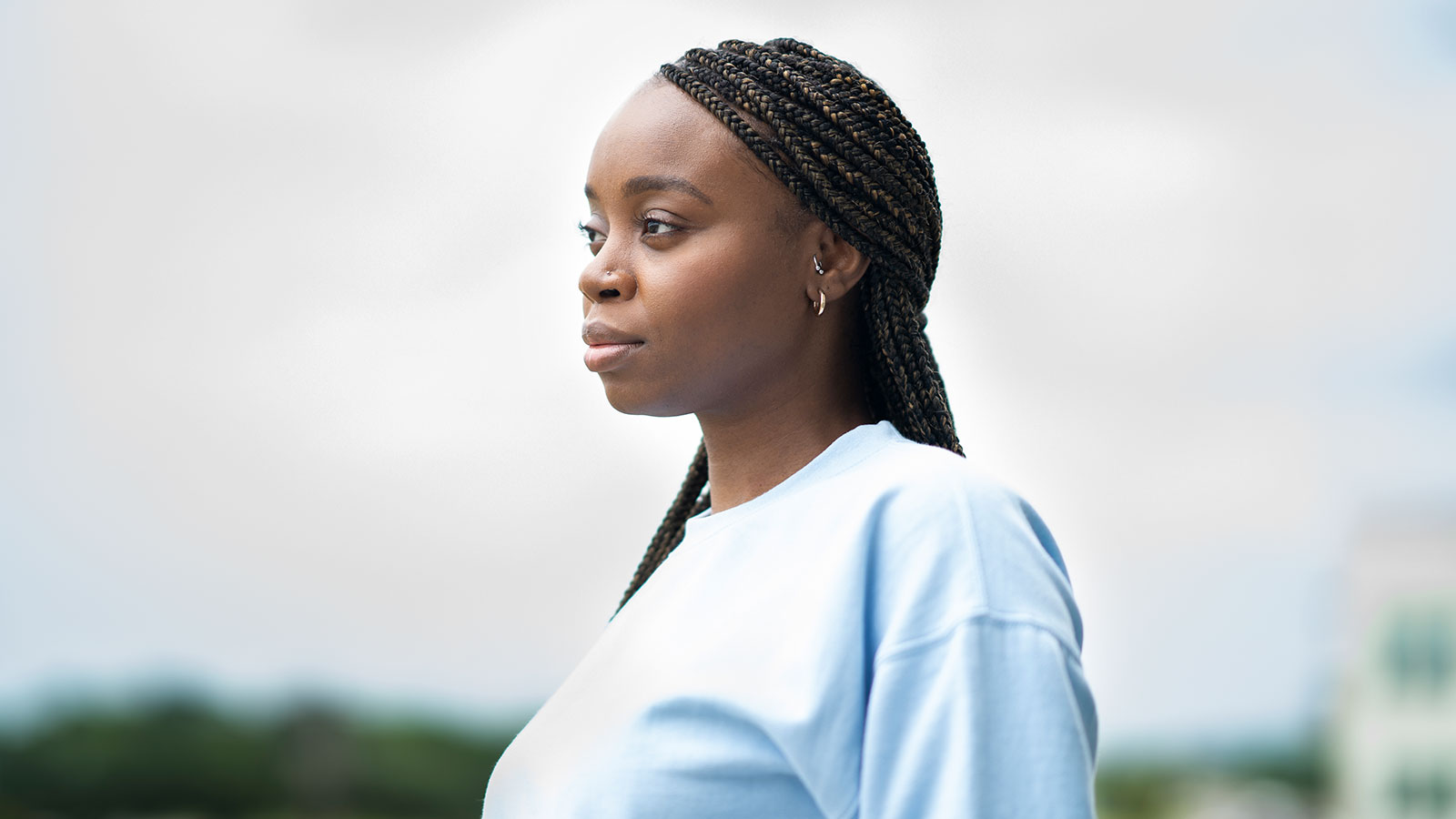 Many Black women felt relieved to work from home, free from microaggressions. Now they’re told to come back.

You Are Here: Home » Blog » Editors' Choice » Many Black women felt relieved to work from home, free from microaggressions. Now they’re told to come back.

After seven years of corporate life, Mary Smith had a routine: putting extra effort into her hair (so as to not appear too Black) and her demeanor (ditto) and her clothes (you can probably guess).

But once she got a taste of the work-from-home life during the pandemic, Smith knew she could never go back. Her scalp was free from constraining hairstyles, and she could disappear from the screen if a colleague said something insulting.

A few months ago, her employer asked her to begin the transition back to in-person work. So she quit. “I was just very strongly against that,” said the 29-year-old project manager in Irving, Tex.

After the coronavirus sent millions of employees home, many Black women experienced a workday free of the micro- and macroaggressions that followed them at their predominantly White workplaces. They had the privacy to grieve the countless deaths that led to the racial unrest of last summer — without having to pretend to be okay for the comfort of their colleagues. And, naturally, many don’t want to return.

Working from home means missing out on networking and social interactions ingrained in the workday. But many Black women have solved this problem by gathering together into pods, a trend that predates the pandemic. People from a variety of disciplines meet to work alongside each other at a coffee shop, a co-working space or a backyard. These groups break the workday bubble of solitude and allow for community without fake niceties or hair-touching.

In June, Smith started a new virtual job and created a FaceTime co-working group. When she needs to focus or is struggling to find motivation, she texts her group chat and sets up a call. Together, they work mostly in silence for hours on end, pausing for a joke or if they need advice.

“My co-workers are my best friends,” said Smith, “because I had the freedom to choose.”

Camille Jadé Villegas, a 32-year-old unemployment claim worker in Chicago, never expected to enjoy working from home — she’s always been an extrovert. But the freedom to be herself and have her camera off — so that clients and co-workers don’t immediately know she’s a Black woman — has been electric. In the absence of an office space, she’s created several communities with other Black women: a book club, an exercise group and a healing circle she calls “makeshift therapy.”

“I was forced to be uncomfortable for the sake of financial stability,” she said. “Now I feel safe. I love it.” 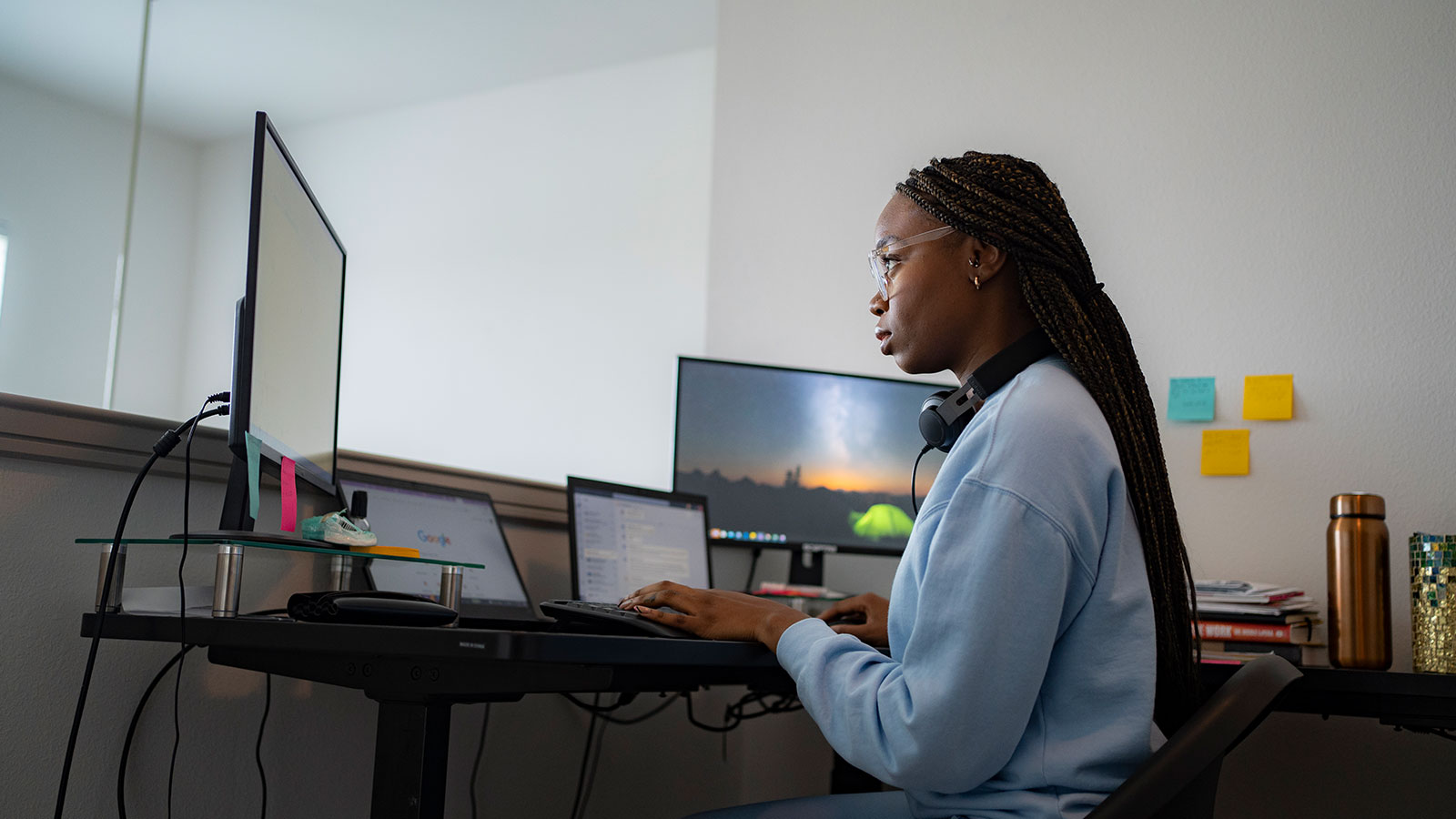 Smith started a new, remote job in June, and created a FaceTime co-working group. “My co-workers are my best friends,” she said, “because I had the freedom to choose.” (Nitashia Johnson for the Washington Post)

In a fall 2020 survey, the Gallup Center on Black Voices found that Black women were less likely than other demographics to feel that they’re a valued member of their team, that they’re treated with respect and that their co-workers treat everyone fairly.

“There’s so much complexity to how we relate to each other in the workplace and whether or not [Black women] feel comfortable showing up as their whole self,” said the center’s director, Camille Lloyd, in an interview. “Those pressures are not always there when you’re thinking about remote work.”

Last year also brought a lot of emotional trauma for Black employees. In May 2020, 28-year-old project specialist Funke Adeniji had been working at home in Silver Spring, Md., for two months. The office hadn’t been her favorite place — as a Black woman, she felt she was expected to be friendly to everyone, look presentable and field inappropriate personal questions. But she didn’t absorb the extent of her freedom until George Floyd’s murder that month. In the ensuing days, weeks, months, she could take a moment to herself between meetings, turn off her camera when she got overwhelmed, ignore texts from colleagues asking her to educate them about race. She didn’t have to pretend to be the happy Black woman. She just got to breathe and be.

“When Philando Castile died, I didn’t take off work, and the hurt that I felt … I just felt like these people don’t care,” said Adeniji, referencing the 32-year-old Black man who was fatally shot by police in 2016 during a Minnesota traffic stop. Last year, she was finding that “I can speak with my community by myself. I’m able to talk about this tragedy online without having to actually walk into work and see that no one cares about it.”

Black women felt uncomfortable in the workplace well before the pandemic, of course. According to the General Social Survey from 2014 to 2018, 14 percent of Black people said they faced discrimination at work because of their sex, race or ethnicity — more than other demographics. A Gallup Center on Black Voices survey from last year found that 24 percent felt discriminationat work.

Black women also have disproportionate child-care burdens compared with other races — they are more likely to be single moms and they’re paid substantially less than White and Asian women. Black workers in Chicago spent six more minutes than White workers commuting, according to an analysis of data from 2010 to 2014. All of this may contribute to preferring a work-from-home setup.

It’s hard to say what exactly was the last straw for Aly Wood. Her tech job was comfortable, but her predominantly White co-workers made her feel anything but. Every day she would field questions about her skin, her body, how her hair changed, why she wore the clothes she did, why she smiled, why she didn’t smile.

So two years ago, Wood switched to a remote job. “There was no salary high enough that could pay me to go back to the office,” said the 28-year-old based in Baltimore County. “It’s just not going to happen for so many reasons.”

She worked alongside a group of women once a week. The space was the opposite of her office experience. It was freeing.

“We all got along really well because we each came from various historically ignored groups,” said Wood. “You can’t truly choose who you interact with and don’t interact with in the office place. You’re just supposed to interact with everyone, have a smile on your face, deal with what everyone says all the time. It’s unrealistic, it’s abusive and it’s unfair.”

Career coach and consultant Kashia Dunner, 29, curated a group that would meet a few times a week at a co-working space. They ate lunch, sat in silence, bounced ideas off each other and gave support when they dealt with racist comments from colleagues. When the coronavirus hit, they couldn’t meet in person anymore — but now she’s excited to restart the group.

“It was just a career-focused, supportive environment with other Black women and women of color, and during the pandemic I really missed that,” said Dunner who’s based in Washington. “It was also nice to have someone to bounce ideas off in the sense of what you’re experiencing at work, because a lot of times our experiences happen to us and we keep them to ourselves.”

The peace that comes with working from home isn’t inevitable. It takes effort to balance work and these social interactions. But longtime work-at-homers Dunner, Wood and cultural producer Debora Charmelus emphasize that Black women often don’t have to go back — even when they feel like they have to.

“It takes a little bit more effort, but I now get the opportunity to curate the people who I want in my life,” said Charmelus, a 27-year-old living in Philadelphia. “That just opens me up to a whole new set of people that I’m eager to learn from. We can’t forget that we need those relationships. Just because it’s not as convenient, you still need to make those connections because that’s vital for our mental health and for us to continue forward.”

Adeniji would prefer to not return to in-person work in the fall but doesn’t know if that’s a possibility. On her Instagram account, @yourcorporateblackgirl, she fields tips, questions and complaints about being Black in the office world. One theme that comes up again and again and again is how employees can persuade bosses to allow them to continue working at home. When Adeniji and so many other Black women have that option, work isn’t about hair or skin or voice — it’s just work.

“If you give me a task, I’ll get it completed,” said Adeniji. “But communicating and networking in a traditional workspace doesn’t really do anything for me. I do want to network, I do want to be able to grow my career. But at the same time, sometimes it’s painful to be in that room.”

Source: Washington Post
Featured Image: Mary Smith, pictured near her home in Irving, Tex., quit her job to avoid going back to the office after the pandemic. (Nitashia Johnson for the Washington Post)