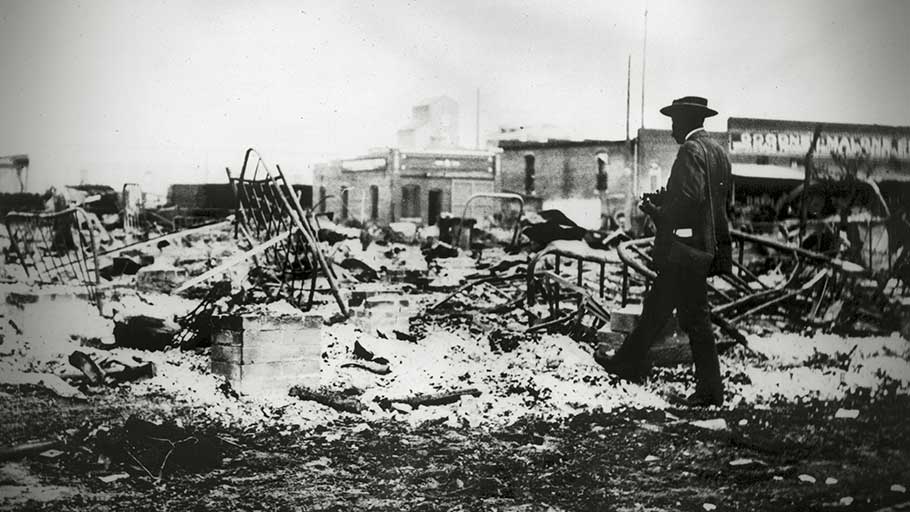 Greenwood, 1921: One of the worst race massacres in American history

You Are Here: Home » Blog » Editors' Choice » Greenwood, 1921: One of the worst race massacres in American history

The death of George Floyd, in the hands of Minneapolis police, came on Memorial Day. Ninety-nine years before, that same week, black Americans suffered a massacre. In the days after World War I, a neighborhood in Tulsa, Oklahoma, called Greenwood was among the wealthiest black communities. Oil made Greenwood rich, but jealousy made it suffer. In 1921, a white mob, with incendiary rage, burned Greenwood to ash. Even memories were murdered when the dead were dropped into unmarked graves. Last December, before the pandemic, we found Tulsa preparing to embrace a reckoning, with a plan to exhume the truth and raise the dead.

John W. Franklin speaks of Greenwood in the present tense…

John W. Franklin: Greenwood is the nexus of that African American community.

…perhaps because he studied Greenwood in 32 years as a historian at the Smithsonian or likely because Greenwood is personal.

John W. Franklin: And my grandfather moves here from Rentiesville in February 1921. And he’s the first person in the family to go to college, Buck Colbert Franklin.

Buck Colbert Franklin was a lawyer who chased his dream to a promised land. Booker T. Washington named Greenwood “Negro Wall Street.” Because the district was lined with black-owned shops, restaurants, two newspapers, a 54-room grand hotel, a hospital and the Dreamland Theater, which would soon boast air conditioning. But on the day after Memorial Day, 1921, Buck Franklin awoke to fearful news.

John W. Franklin: He hears that there’s to be possibly a lynching. There’s this black man who’s been caught with this white woman in the elevator. And the newspapers are saying, read all about it. Extra, extra, read all about it.

Tulsa’s white newspapers told of a black teenager who allegedly attacked a white female elevator operator. At the jail, a lynch mob demanded the prisoner. Black veterans of World War I arrived to shield the defendant for his day in court. A shot was fired. And, in a running gun battle, the mob chased the black vets to Greenwood.

Scott Pelley: One of the moments during the riot that your grandfather wrote about was this. “On they rushed, whooping to the tops of their voices, firing their guns every step they took.” What is it like for you to read those words today? 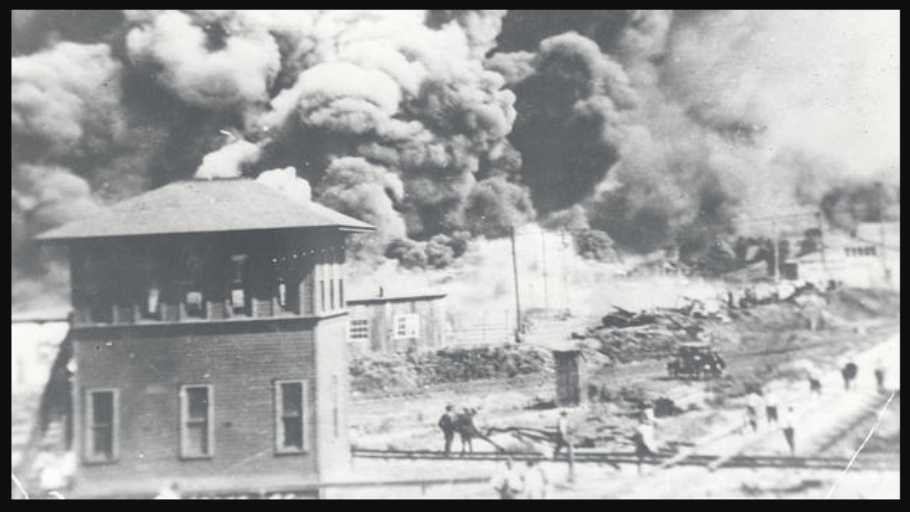 What began as an attempted lynching at the jail erupted into a massacre. From a high grain elevator, a machine gun laid fire on Greenwood Avenue.

John W. Franklin: Where’s the fire department? Where’s the police when we need them? We’re part of a city. This is not some small town. This is a city of wealth and order, and governance. It’s now been taken over by a mob.

The police joined the mob. National Guard troops pressed the attack against what one guard officer called “the enemy.” Quotes from eyewitnesses include, “old women and men, children were running and screaming everywhere.” A deputy sheriff reported a black man dragged behind a car, “his head was being bashed in, the deputy said, bouncing on the steel rails and bricks.” But what happened next may have frightened Buck Franklin even more.

John W. Franklin: And he hears planes circling and sees roofs of buildings catching fire. And these are from turpentine balls, burning turpentine balls dropped from planes.

Robert Turner: The first time in American history that airplanes were used to terrorize America was not in 9/11, was not at Pearl Harbor, it was right here in the Greenwood District.

Reverend Robert Turner’s Vernon AME Church was among at least five churches burned, along with 1,200 homes. A photo was crudely and imperfectly, hand-lettered, at the time, “running the Negro out of Tulsa.” 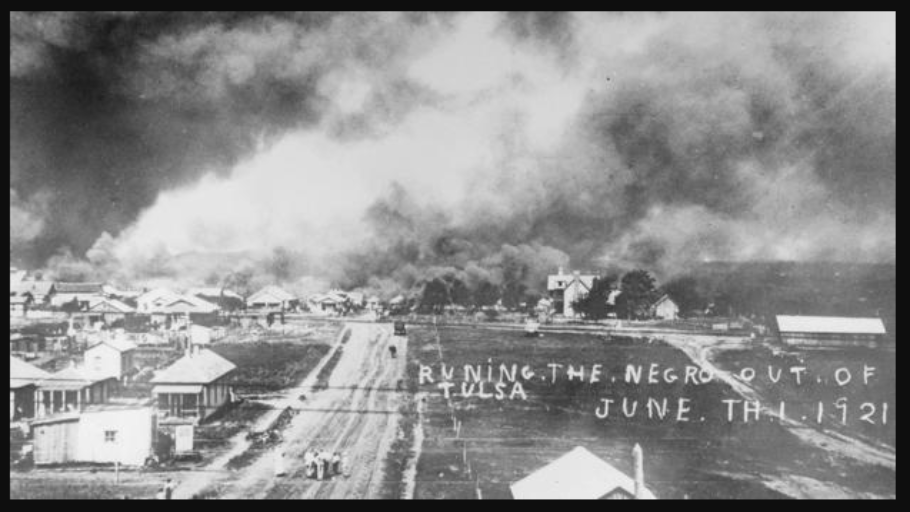 A photo was crudely and imperfectly, hand-lettered, at the time, “running the Negro out of Tulsa.” OKLAHOMA HISTORICAL SOCIETY

Robert Turner: 36-odd square blocks, city blocks, were destroyed. And before they destroyed it, they looted. They took nice furniture, money

When the black hospital burned, white hospitals refused to take Greenwood’s wounded. Those who bled to death included Greenwood’s most prominent surgeon. Ultimately, one hospital did make space in its basement for black casualties. The number of dead is estimated between 150 and 300. Survivors included 10,000 now homeless African Americans. 6,000 of them were herded into internment camps and then released weeks later.

Robert Turner: I don’t know how they did it. But the following Sunday after the massacre, they came and worshipped in our basement. And that’s the same basement that we have today.

The death of a black man at the hands of police is, today, shouted into the national memory.

But in 1921, it remained possible to erase a genocide.

Congregant: I grew up attending segregated Tulsa public schools. Never in any of the schools was anything ever said about it.

The congregation of Vernon AME Church is two generations beyond 1921 but they too were victimized.

Scott Pelley: this was not taught in the public schools?

Scott Pelley: You never heard about this in class?

Congregant: You never heard a word about it. 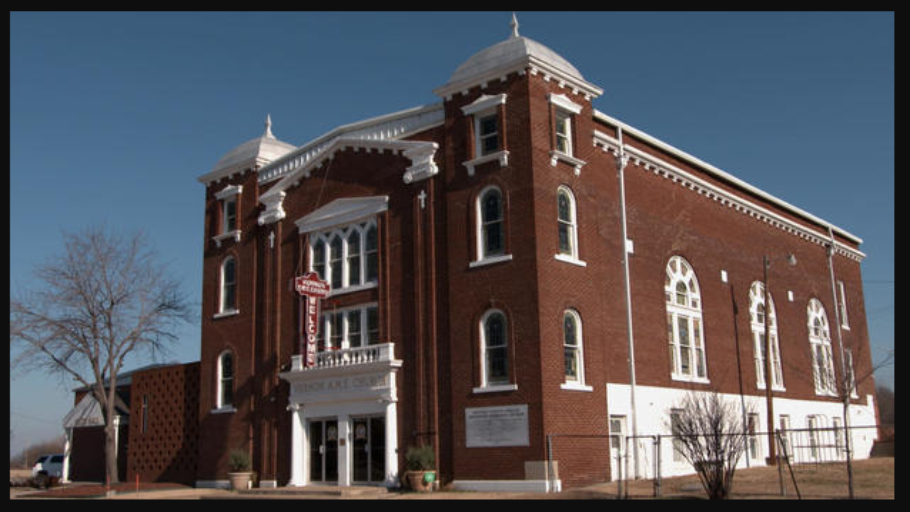 Damario Solomon-Simmons: When I went to OU in 1998, I was sitting in a class of African American history. And the professor was talking about this place where black people had businesses and had money and had doctors and lawyers. And he said it was in Tulsa. And I raised my hand, I said, “No, I’m from Tulsa. That’s not accurate.” And he was talking about this massacre riot. I said, “Man, what are you talking about?” I said, “I went to school on Greenwood. I’ve never heard of this ever.”

Scott Pelley: How many people were arrested, tried, for what happened in Greenwood?

John W. Franklin: No one.

Scott Pelley: Two or 300 people murdered, an entire community burned to the ground, and the police were unable to find a single person.

John W. Franklin: All the thousands of claims that were filed by African Americans, not a one, not a one insurance company paid their claim. And our church was included.

No insurance honored for black Tulsans, no arrests made, no complete count of the dead. The Salvation Army recorded only that it fed 37 grave diggers. The nameless were buried in unmarked graves while their families were locked down in the internment camps.

Scott Pelley: I wonder if there are any doubts in this room about whether there are mass graves in Tulsa, Oklahoma. No doubts?

G.T. Bynum: As a mayor, I view it as a homicide investigation.

G.T. Bynum is Tulsa’s Republican mayor. In 2018, he ordered an investigation of all remaining evidence.

G.T. Bynum: What you have is a case of law and civil order being overrun by people who were filled with hatred

G.T. Bynum: We believe at the end of this road we’re walking down right now is one of the sites where we found an anomaly.

“Anomalies” of disturbed earth showed up in the studies of Scott Hammerstedt. That’s not a mower, it’s ground penetrating radar. He’s a senior researcher at the Oklahoma Archeological Survey.

Scott Pelley: The anomalies that we’re looking at, what are those?

Scott Hammerstedt: It’s just contrast between the surrounding soil that’s undisturbed and then this soil that has been disturbed.

Scott Pelley: So we’re not seeing, in these images, human remains?

Scott Hammerstedt: No. No. It’s definitely not like CSI. You don’t see individual skeletons. You just see disturbances and contrasts which is why you can’t really say necessarily that for sure it’s a common grave. But it’s very consistent with one.

G.T. Bynum: Of course there’s any number of things it could be. That’s always the thing I have to remind myself.

Scott Pelley: And there’s only one way to find out?

A ten-day test excavation is scheduled to begin in July, led by University of Florida forensic anthropologist Phoebe Stubblefield. She’ll investigate cause of death, but it’s complicated, because of the Spanish flu pandemic from the same period.

Scott Pelley: So, just because you find a burial site, it doesn’t necessarily mean that it’s from the massacre. 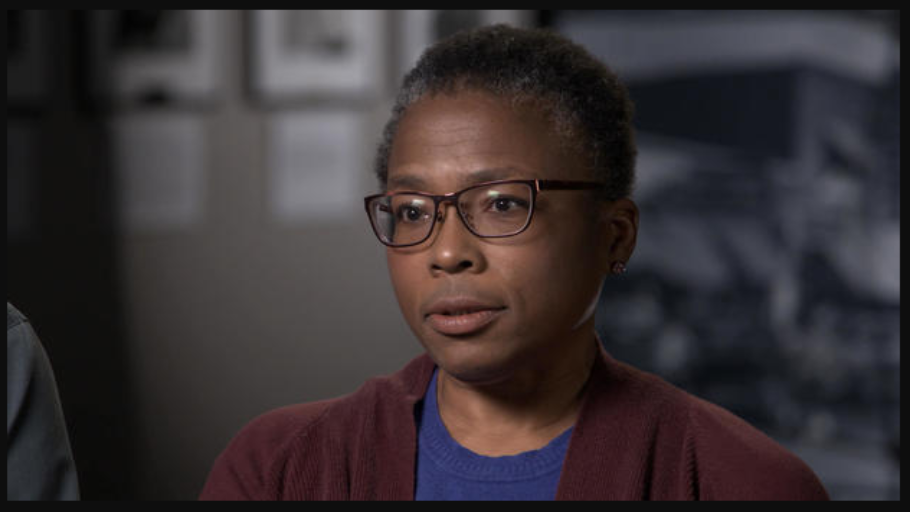 Phoebe Stubblefield: Correct. And so, I’m interested in markers like signs of violence or any kind of– ballistic injuries or chop injuries.

Scott Pelley: Can you retrieve DNA?

Scott Pelley: Would it be possible in your opinion to actually identify some of these people?

Scott Pelley: There’s a long legacy from 1921. Tulsa is still one of the most segregated cities in the country.

Scott Pelley: The north part of Tulsa is black, the south part is white, and the twain don’t meet very much.

G.T. Bynum: Right because of the history of racial disparity that exists in our city. A kid that’s growing up in the predominantly African American part of our city is expected to live 11 years less than a kid that’s growing up in a whiter part of the city. And by the way, Tulsa’s not unique in that regard. You see disparities like that in major cities all around America.

The test excavation is expected to discover whether there are human remains. Next steps would include recovery and the question of how to honor those who have waited nearly 100 years for justice.

John W. Franklin: How do you commemorate an event, that gives dignity and honor to the people who’ve been lost?

Scott Pelley: We have taken in recent decades in our memorials to etch the names of every single person who was lost. The 9/11 memorial, the Vietnam memorial. That’s not gonna be possible here. We don’t know the names.

John W. Franklin: We don’t know the names. and– you’re going to have to do some kind of– you know– we have the Tomb of the Unknown Soldier. So, it has to be something that is representative of lost souls, lost in anonymity. Something like that will have to be planned.