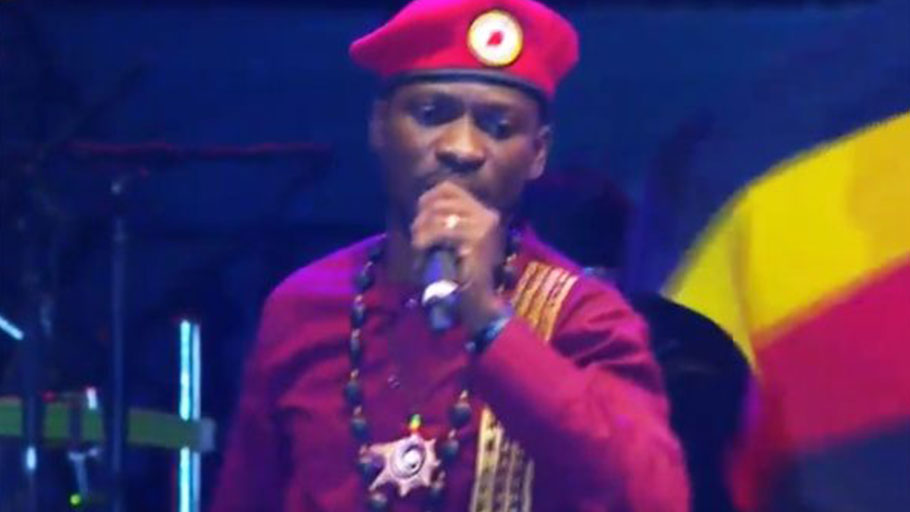 Member of parliament and musician Bobi Wine says there are still 40 million people living under oppression, and domination, and under dictatorship in Uganda.

The politician and freedom fighter said reggae music has helped to influence him to fight against colonial afflictions while growing up in the ghettos of Uganda.

Member of parliament, freedom fighter and artist Bobi Wine traveled 36 hours to Jamaica, the politician says, to be able to spread his musical message to his fellow Ugandans and the rest of the world.

Bobi Wine made the remark while performing in the early hours of Sunday on the second and final day of the 26th staging of the annual Rebel Salute roots reggae festival held in St. Ann in northern Jamaica.

During his set, the Ugandan representative for Kyadondo East took time to laud his countrymen for being “beautiful… enterprising people,” adding that, somehow, there are still “40 million people living under oppression, and domination, and under dictatorship.”

Wine explained that music has played a “big role to end slavery” while also trying to eliminate all versions of the colonial construct on the African continent. “When injustice continues and is being put on you by your own brother it is colonialism in black skin.”

The freedom fighter and performer reminded the patrons of the festival that music helped to “open the eyes of the people … to fight without violence, without shedding blood” against injustice, segregation and apartheid, specifically in South Africa.

Ya mon, Janaica we dere. pic.twitter.com/OEHDTIMowS

“I want to dedicate the performance to the millions watching me live in Africa right now,” Wine said while pacing the stage with the flag of Uganda being waved behind him. “I am in Jamaica now.”

The activist — between performing songs in both English a native Ugandan language — recounted government official’s “planting machine guns” in his hotel room to arrest him, since his message to the youth of Uganda was and is still viewed as a “threat” to the country’s dictatorship.

“They collect me and shoot my driver … They beat me and put me in military detention,” Wine said at the end of one of his songs.

“Back in Uganda, I been one of the most successful artist, the richest artists. And having come from the ghetto, I used to believe that was the top of accomplishment … I was owning … the most expensive [Ford] Escalade. … As a youth, I used to think that is all there is — to acquire —until I look behind me and saw all the childhood friends languishing in poverty, which they are not supposed to be experiencing,” Wine recalled.

“I represent for Africa, a new Africa, with a new imagination. That is why I thought that it is important to use my music for more than just entertaining but to use it for edutainment.”

Additionally, Wine disclosed that he is still “banned from performing” in Uganda and the availability of his music is strictly prohibited and he is also prevented from attending public events anywhere in the country.

However, the artist added that he is “not afraid” and will not “give up” fighting for the freedom of the people of Uganda. Wine expressed that oppressors are trying to destroy the country, which he declares is “the most beautiful part” of the African continent.

The politician said reggae music has helped to influence him to fight against colonial afflictions while growing up in the ghettos of Uganda, stressing that Jamaica’s music and its people are integral to freedom fighting across the continent.

“We shall continue to use the music to liberate the people of Africa,” the activist emphatically stated. “Liberate the minds of men and ultimately you liberate the bodies of men,” Wine added, citing Jamaican national hero and pioneer of black civil rights movements, Marcus Garvey.

“The most important weapon in the hands of the oppressor is the mind of the oppressed,” the member of parliament highlighted, urging Jamaicans to keep their eyes on Africa to help expose suppression of the continent’s peoples.

Wine explained that it was after the international scrutiny and pressure was mounted, by various people and a tweet from Jamaican reggae group Morgan’s Heritage, that the Ugandan government was forced to release him from detention.