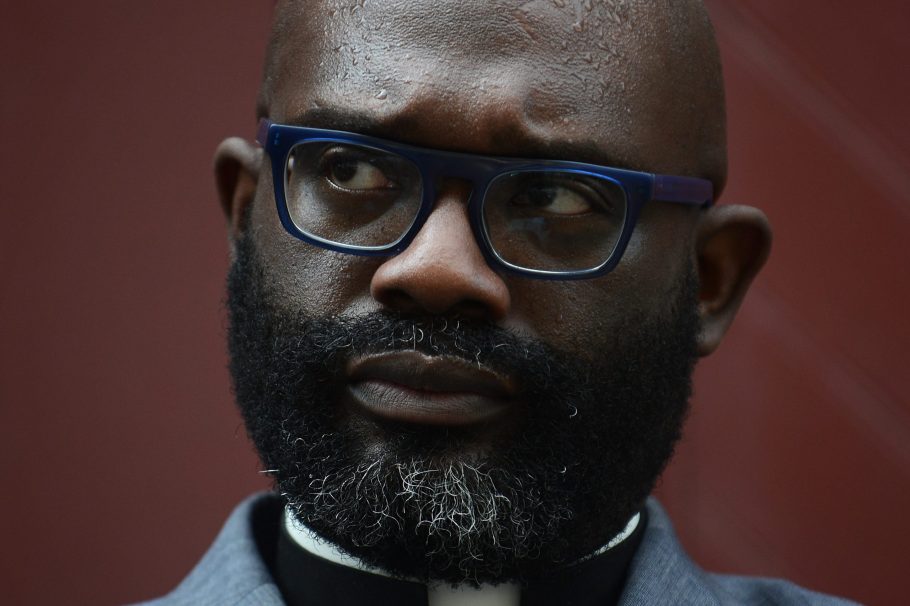 My church will replace our Black Lives Matter sign. Will America replace its racist myth?

You Are Here: Home » Blog » Editors' Choice » My church will replace our Black Lives Matter sign. Will America replace its racist myth?

The Rev. William H. Lamar IV is the pastor of the Metropolitan African Methodist Episcopal Church in Washington.

Do you hear what I hear? I hear the imperial American myth in the throes of its own death rattle. And I hear a people clamoring for a story by which to order their lives.

The United States does not like to call itself an empire. But it is. Through military and economic force, the United States extends its narrative, politics and culture throughout the globe for good and for ill. The American story to which I refer does not shape our domestic life alone. It shapes the world.

Myths, stories, give our lives meaning. They tell us who we were, who we are and who we will be.

The myth of the American imperium is deeply rooted in falsehoods and forgetfulness, in intentional historical amnesia and obfuscation. Liberty was not the founding American impulse; genocide was. The blessing of God did not secure this nation’s prosperity. The forced labor of my ancestors did. The founders were not committed to a republic or a democracy. They were committed to a racialized plutocracy led by propertied White males.

Everyone else was excluded by law, custom and violence. A sign came down on Saturday.

The Black Lives Matter banner in front of Metropolitan African Methodist Episcopal Church, where I am privileged to serve as pastor, was removed and destroyed on Saturday evening. I am deeply disturbed by this incident (one of several incidents targeting houses of worship), but I am more disturbed by the continued mythology of imperial America. This mythology supports those who commit violence against human beings for political ends, deny citizens their right to vote, denigrate sacred spaces and claim as their own whatever they survey.

That is the history written into this nation, into the bodies of those brutalized by this mythology, and carried forth in this moment by human beings who have been malformed by a story of scarcity that precludes their own flourishing and the flourishing of others.

The world’s empires have all fallen upon the ash heap of history. Only ideologues believe that the American empire will last forever. The death rattle gets louder with every frivolous lawsuit that seeks to overturn the election, with every conspiracy theory that gains purchase, with every refusal to protect the vulnerable from the coronavirus unless corporations are protected first. The political imagination of this entire nation is captive to a white-supremacist myth. Only a new narrative can change the way we order this society.

Thousands of people marched in support of President Trump two days before the electoral college is set to vote to confirm the vote of the 2020 election. (Video: Jorge Ribas, Ashleigh Joplin/Photo: Evelyn Hockstein for The Washington Post/The Washington Post)

This new narrative must question everything if we are serious about imagining a better world. The media, academia and religious institutions alike often behave as if American capitalism was decreed by the divine. The economic infrastructure of this nation generates inhumane inequality. Religious fundamentalists believe in individual sin while turning a blind eye to the sinfulness of an economic system that forces working people to pay more of their income in taxes while refusing to pay them living wages, that deprives them of health care and humane retirements. And all this happens while the rich grow richer.

Those who ripped down our sign — whether they are aware of it or not — suffer from kleptocratic, crony capitalism in the United States. What they really want is a new narrative and a new politics. What we must do is the hard work of creating this new narrative — one that tells a true story of humans thriving together and sharing the abundance of the land and their labor.

As a preacher, I view what happened in the yard of our church as a showdown between the God of the universe, the God of all people, the God incarnate in Jesus Christ, and the god of white supremacy.

The men and women who founded the African Methodist Episcopal Church knew and were known by the God of all people. Metropolitan is rooted in this theological vision that humankind is one family. There have been outposts of resistance to the god of white supremacy from the beginning. These institutions must lead the way toward a new narrative. And white-supremacist institutions must assume the role of student, not teacher.

The United States of America must abandon this god, this story and the violence that flows from fidelity to the same.

Will the United States replace the story that makes such acts of desecration inevitable?