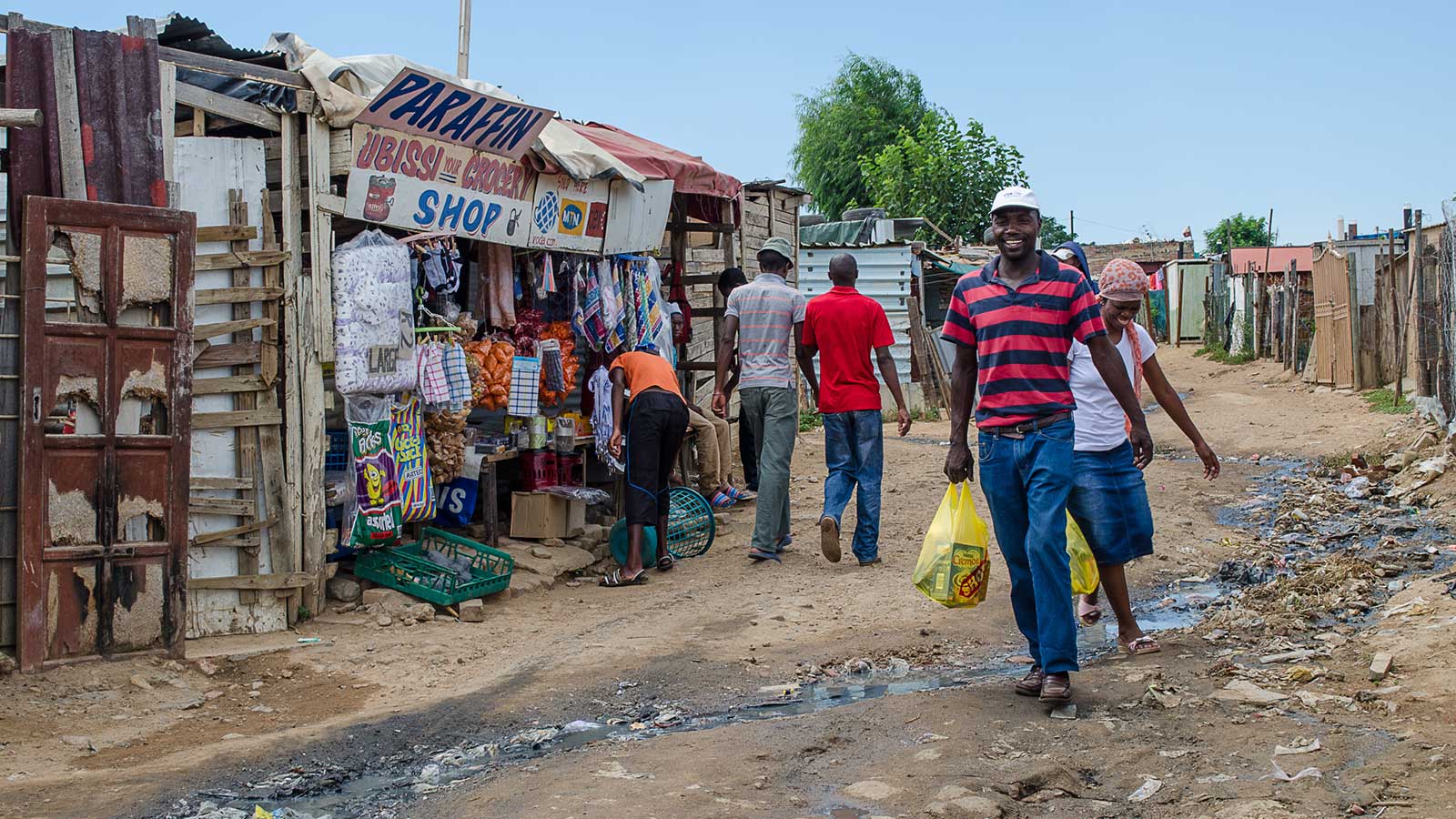 South Africa: The fault-lines of the world’s most unequal society

You Are Here: Home » Blog » Editors' Choice » South Africa: The fault-lines of the world’s most unequal society

By John Allen, All Africa —

Cape Town — Amid the explosive cocktail of ingredients which contributed to the outbreak of looting and burning in South Africa this week, new fault-lines running through a society divided by class as well as by race were on display as never before.

The unrest may have been triggered by the jailing of former president Jacob Zuma and exacerbated by factors ranging from orchestrated incitement by pro-Zuma forces, to hardships caused by Covid-19 job losses, to wanton criminality. But as rioting spread from Zuma’s home province of KwaZulu-Natal to the economic heartland of Gauteng, the effects of extreme economic inequality in post-apartheid South Africa became apparent.

During the apartheid era, the sporadic uprisings against a regime underpinned by a powerful military were mainly aimed at symbols and infrastructure identified with an oppressive state, as well as at those subjects of the system who were perceived to be collaborating with it.

But this week, the wall-to-wall coverage provided by the country’s three 24-hour television news channels showed unprecedented scenes of working- and middle-class black South Africans mobilising, sometimes alongside white compatriots, to defend those gains they have made since political liberation in 1994.

South Africa has long been known as a nation of income inequality, in which a few top earners enjoy a high proportion of the country’s income, in contrast to the small proportion earned by the vast majority. The government agency, Statistics South Africa, says the inequality is “extremely high and has remained so since 1993”. The latest World Bank figures show that it is the worst in the world. The official unemployment rate, driven to a record high by one of the strictest Covid-19 lock-downs in the world, was 32.6 percent in the first quarter of this year and 46.3 percent among youth under 35.

However, the racial make-up of higher income groups has changed since 1994 (albeit leaving white South Africans still the most privileged as a group). The economic and political analyst Moeletsi Mbeki has pointed to figures showing that black South Africans have overtaken whites to make up the biggest constituency of South Africa’s middle class.

Speaking to church leaders in 2019, Mbeki cited statistics showing that business and political elites, independent professionals and the middle class totalled more than two million of the working-age population of 23 million. Blue-collar workers in the private and public sectors – who are overwhelmingly black – made up another nine million.

Against this, 12 million South Africans were either unemployed or part of what he described as an “under-class”.

It is against this backdrop that the attacks of the last week – primarily aimed at property – have unfolded.

How the rioting spread

Long-distance trucks carrying supplies on the main highway between Durban and Johannesburg were the first targets after Zuma’s jailing. As looting and arson spread in KwaZulu-Natal, two of Zuma’s children, the twins Duduzane and Duduzile, were among those accused of encouraging insurrection on social media.

The political analyst Rebone Tau was among observers who suggested that the “Free Zuma campaign” had within it “an element of Zulu nationalism”. (Later in the week, King Misuzulu ka Zwelithini, recently named to succeed his father as the new cultural leader of Zulu-speaking people, made his first public address in that capacity, condemning the “lawlessness and criminality” which “has brought shame upon us as fingers are pointed at my father’s people.”)

The attacks quickly spread to Gauteng, where as in KwaZulu-Natal they were principally aimed at warehouses, shopping malls and business centres. As the government got to grips with the situation, security ministers began to point fingers at sinister, dark forces, which they later identified as pro-Zuma intelligence operatives gone rogue.

South Africans have long been accustomed to politicians blaming unrest on instigators rather than acknowledging governmental failure, but this week at least one independent expert agreed – and usually sceptical journalists reported – that a deliberately-planned counter-intelligence operation primed and set off the rioting.

Nevertheless, if pro-Zuma sentiment was the match which lit the fire, the tinder which enabled it to catch and spread so fast – vastly outstripping the capacity of the police to respond – was hunger, poverty, mismanagement by local government and the lack of confidence in the country’s political leadership which the corruption of the Zuma years engendered.

The comment of a 25-year-old to GroundUp, a news service which focusses on the stories of the marginalised, was typical of many. Explaining to reporter Kimberly Mutandiro why he was selling looted sweets at half-price, he told the reporter: “It’s hunger, my sister. If l can get R30 (U.S. $2), l will buy something to eat. Everyone is helping themselves to goods in shops, we just follow suit.”

In north-eastern Johannesburg, serious maladministration of a “renewal project” in the poor and overcrowded black community of Alexandra was reported last week by the government’s Human Rights Commission to have created “a ticking time-bomb”. The report was issued in response to unrest in 2019 – which erupted again this week.

The church leader, Archbishop Thabo Makgoba, who grew up in Alexandra, spoke out against this week’s unrest, but voiced his understanding of its roots. “The vast majority of us are good people at heart,” he said.

“But when people go to bed hungry, unemployed, dominated and marginalised, the good in us can be overwhelmed, especially if we see no end to our suffering and especially in times of instability when it seems all bets are off. Desperation can take over, especially when people lose confidence in their political parties and perceive the police as unable to protect their communities.”

During apartheid, shopping malls in the crowded black residential areas such as Alexandra and Soweto in Johannesburg and Hammarsdale near Durban, were unknown. Now they are commonplace – and became the targets of attack this week.

In acts of what police and security analysts described as “opportunistic criminality”, looters stole and rolled away high-end goods such as huge flat-screen TVs, fridges and microwave ovens in front of television cameras.

Some of the looters were heard drawing distinctions between stores which were assumed to carry insurance against losses – usually owned by large conglomerates – and those operated by emerging black business owners, which are often uninsured.

But as it became apparent that black South Africans with jobs and owners of new businesses would lose as much as, if not more than, anyone else, anger grew.

Nombuso Makhanye told Naledi Sikhakhane of New Frame in Hammarsdale: “There was no need for them to burn the shops. They don’t think about the people who work there. I am the sole breadwinner in my family, and I only have experience in supermarkets, so getting a job elsewhere would be nearly impossible.”

Entrepreneurs who had sunk their life savings into businesses ranging from mattress and bedding shops to restaurants in black residential areas told television journalists their livelihoods had been wiped out.

Sayabo Wodimu, the owner of a small, informal “spaza shop” in Alexandra, told GroundUp reporter Masego Mafata: “I don’t know what I did to deserve this. I know the people in this community, I help them where I can, so I don’t understand why they destroyed my shop. They took clothes, groceries and even the engines for my refrigerators.”

In communities across the affected areas, residents took matters into their own hands in the absence of police. Racist incidents were reported in Durban and the KwaZulu-Natal capital, Pietermaritzburg, where residents of some predominantly white or Indian suburbs set up roadblocks and demanded proof of residence – or receipts for groceries – from black motorists.

But extensive self-help initiatives launched within the law were also reported. In Johannesburg, where a mall founded by a legendary black business pioneer, Richard Maponya, was reported to be the only one in Soweto not destroyed, residents spent the night ready to defend the complex, and handed to the police those suspected of coming to loot.

Operators of minibus taxis, who make their living from taking millions of black commuters to work or to shopping malls, rallied in support of residents defending local businesses. In the Eastern Cape, an area which has so far escaped the unrest, they formed a convoy through one township, warning against looting.

In KwaZulu-Natal and Gauteng, local residents and volunteers joined forces to begin cleaning up. On Tuesday, a Soweto woman, Emelda Masango, started a Facebook group matching volunteers with people needing help. By Friday, it had 50,000 members. Wrote Marianne Thamm in the Daily Maverick: “This past week not only revealed to us the vulgarity and the violence of a disastrous scheme to destabilise the country, but also the capacity for solidarity and community in the face of a total collapse of law and order.”