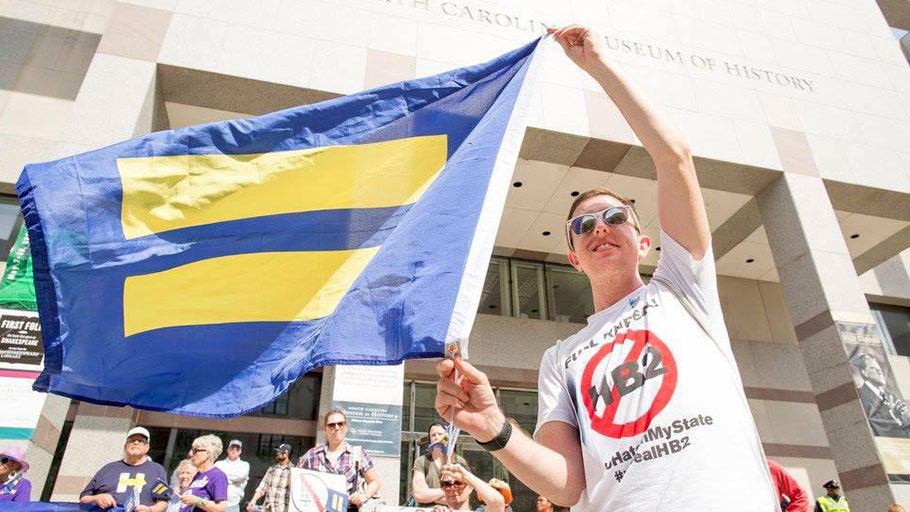 Protests and lawsuits against North Carolina’s notorious anti-transgender “bathroom bill” have led to a legal settlement that’s being hailed by human rights advocates. But lawmakers in other states are continuing to target the transgender community with discriminatory proposals. (Photo from the Human Rights Campaign’s Facebook page.)

This year has seen the continuation of an alarming epidemic of violence against transgender people in the United States. At least a dozen transgender people have been killed already this year, most of them women of color, according to the Human Rights Campaign.

Nine of these murders have occurred in the South — yet lawmakers in Southern states have continued to target the transgender community with discriminatory measures. This year, legislation was introduced in Florida, Tennessee, and Texas to restrict the rights of sexual minorities, including transgender people.

In Florida, Republican Rep. Michael Grant of Port Charlotte introduced House Bill 3, which among other things would have overturned local ordinances banning discrimination on the basis of sexual orientation or gender identity. The measure was co-sponsored by GOP Reps. Rick Roth and Anthony Sabatini and Democratic Rep. James Bush. The bill eventually died in committee.

In Tennessee, lawmakers introduced six bills that have been described as a “slate of hate” by LGBTQ rights advocates. Most of the measures were eventually tabled except one directly targeting transgender people by expanding the definition of criminal indecent exposure to include transgender people using public restrooms that don’t correspond to the gender on their birth certificate. The primary sponsors were Rep. John Ragan and Sen. Mark Pody, both Republicans.

Though the language explicitly targeting the transgender community was eventually removed before the bill was passed and signed into law by Gov. Bill Lee (R) in May, LGBTQ advocates are still concerned that it could lead to harassment for transgender people.

“There is a long history of policing, assaulting, and harassing transgender people in spaces like locker rooms,” said Chris Sanders, executive director of the Tennessee Equality Project. “And even though trans people are not directly mentioned in the bill, by enumerating the spaces where indecent exposure is defined in the code, there are concerns that that might lead to more reporting and policing of trans people in those spaces.”

And one sponsored by Republican Sen. Charles Perry would have allowed state-licensed professionals such as doctors, teachers, and counselors to refuse services to LGBTQ people based on a “sincerely held religious belief.” All of the measures were still pending in committee when the legislature adjourned in May.

Texas is also among the 17 states where lawmakers have considered so-called “bathroom bills” to bar transgender people from using public restrooms that match their gender identity; it did so in 2017. The other states are Alabama, Arkansas, Illinois, Kansas, Kentucky, Minnesota, Missouri, Montana, New York, North Carolina, South Carolina, South Dakota, Tennessee, Virginia, Washington and Wyoming.

The only state to pass such legislation to date has been North Carolina, setting off a protracted legal battle that just ended last month with a settlement that represents a win for transgender rights.

It began in 2016 when the state’s Republican-controlled legislature passed House Bill 2, a measure sponsored by Republican Rep. Dan Bishop of Mecklenburg County that preempted local anti-discrimination ordinances and required transgender people to use restrooms in state-run buildings corresponding with the gender on their birth certificate rather than the gender with which they identify. The bill was signed into law by former Gov. Pat McCrory (R).

Immediately after its passage, the national and state ACLU, Lambda Legal, and Equality North Carolina filed a lawsuit. The U.S. Department of Justice under President Obama later joined the fight by suing McCrory, the N.C. Department of Public Safety, and the University of North Carolina system, which had said it intended to follow the law. The plaintiffs argued that the law violated Title IX of the Civil Rights Act as well as the due process and equal protection clauses of the U.S. constitution.

In addition, the law led to an economic boycott of the state by corporations, film productions, and high-profile sporting events. The Associated Press estimated that HB2 would ultimately cost the state $3.76 billion over 12 years.

The controversy over the law was also a factor in the downfall of McCrory, who lost the governor’s race to Democrat Roy Cooper in 2016. The following year, Republican lawmakers made a deal with Cooper to replace HB2 with a new law, House Bill 142. Though the measure did not fully repeal HB2, leaving in place a provision preempting local governments from passing anti-discrimination measures protecting LGBTQ people until December 2020, it did remove the bathroom provision. The ACLU and other groups amended their lawsuit to challenge HB142 as well.

On July 23, U.S. District Court Judge Thomas Schroeder approved a settlement in the lawsuit that affirmed transgender people’s right to use bathrooms corresponding to their gender identity. The settlement was backed by Cooper as well as LGBTQ advocacy groups.

“After so many years of managing the anxiety of HB2 and fighting so hard, I am relieved that we finally have a court order to protect transgender people from being punished under these laws,” said Joaquin Carcaño, a transgender man and UNC-Chapel Hill employee who served as the lead plaintiff in the lawsuit.

However, the provision of the law barring local governments from passing anti-discrimination rules protecting LGBTQ people remains in place through next year. Meanwhile, the Republican-controlled North Carolina General Assembly has filed court papers opposing the settlement.

Benjamin Barber is an intern with the Institute for Southern Studies. He holds a bachelor’s degree in history from Barton College in Wilson, North Carolina. Benjamin previously interned with the Equal Justice Initiative in Alabama and served as the historian for the North Carolina NAACP Youth and College Division.