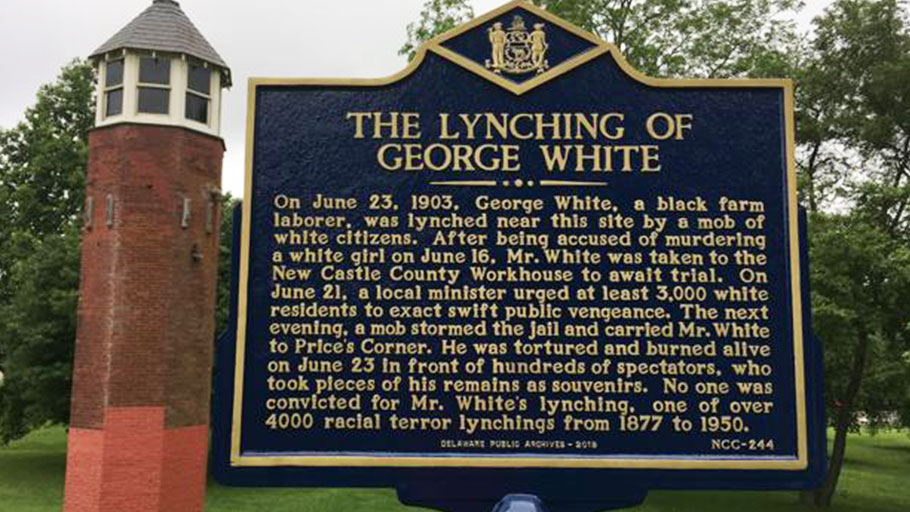 WILMINGTON – On Friday, it was reported that the historical marker recognizing the lynching of George White, unveiled just over a month ago, was stolen from Greenbank Park on Kirkwood Highway.

The historical marker appeared to have been pulled out of the ground, leaving a hole where it once stood. According to officials at the Delaware Public Archives who oversee historical markers in the state, the concrete footing that secured the marker in the ground would have made the sign extremely heavy and hard to remove. Officials from the Public Archives estimated a replacement would cost $2,205, including fabrication and installation.

State Sen. Darius Brown sponsored the marker after being contacted by high school student Savannah Shepherd with the idea. As the state Senator from the 2nd Senate District and the chair of the Delaware Legislative Black Caucus, he released the following statement:

“I was incredibly proud to play a part in bringing this historical marker to Delaware and I could not be more disappointed that it has been stolen,” he said. “The story it tells is unfiltered and powerful. The lynching of George White, a black farm laborer burned alive by a white mob in 1903 right here in New Castle County, cannot be ignored. Remembering our past in this honest and direct way has the power to bring us to tears but also to heal and to spur change. I imagine that whoever ripped the sign from the ground did so for many of the same reasons.

And that, too, is a reminder that – at every step along the way – we have been opposed and impeded for simply remembering our past and demanding better. We didn’t give up then; we will not give up now.”

The movement to secure the marker was initiated by a local high school student, Savannnah Shepherd.

“We are very saddened and disappointed to hear about the historical marker,” the Shepherd family said in a statement. “We aren’t drawing any conclusions today about who took the sign, how, or why. But we do wish we could engage in a conversation with whoever did this and we strongly believe that, with some level of understanding about why this marker and this history matters to us, all of this could have been avoided.”

Shepherd first learned about White’s murder after visiting the National Memorial for Peace and Justice in Montgomery, Alabama – the nation’s first memorial dedicated to the roughly 4,300 documented racial terror lynchings of African Americans between the end of the Civil War and the end of World War II. Shepherd founded the Delaware Social Justice Remembrance Coalition and worked to get a historical marker placed in the area where White was killed. She approached Sen. Brown, who agreed to cover the cost of the marker and advance her efforts.