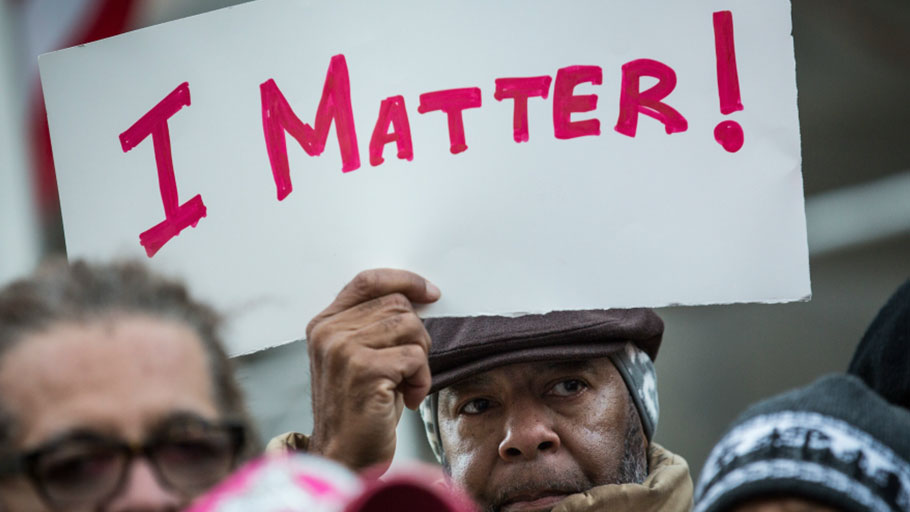 The Capitalism/Racism Partnership- The Basics

You Are Here: Home » Blog » Editors' Choice » The Capitalism/Racism Partnership- The Basics

Faith leaders from communities throughout New York City lead a demonstration and prayer vigil on the steps of City Hall in protest to the Staten Island, New York grand jury’s recent decision not to indict a police officer involved in the chokehold death of Eric Garner in July on December 12, 2014 in New York City.

Revulsion is building towards the smokescreens of hypocrisy, racism, and nationalism barely masking capitalism’s ongoing failure to provide the jobs and incomes people need.

In the wake of W.E.B. DuBois ’s 150th birthday, his works offer a lens through which to assess US capitalism’s relationship to racism today. He famously wrote: “Capitalism cannot reform itself; it is doomed to self-destruction,” while adding that in the US, race would be a key issue in that process. Thus he would have had much to say when, around last Memorial Day, Trump suggested that NFL players peacefully protesting police killings of black people did not belong “in the country.”

An extreme right-wing capitalist agenda prevails. It pushes private capitalists’ goals—privatization and deregulation; tax cuts for corporations and the rich;and subsidies for them—to lengths not seen before. A kind of unhinged capitalist euphoria makes a virtue of learning nothing about restraint from the catastrophic booms and busts associated with 1929 and 2008.

Capitalism’s headlong rush is quite logically symbolized and figureheaded by Trump. Yet what makes it possible is above all the absence of any serious, organized opposition such as that successfully mounted during the Great Depression by the New Deal coalition of industrial unions, two socialist parties, and one communist party. After 1945, Republicans attacked and Democrats abetted the demise of the New Deal Coalition and subsequent efforts to rebuild it. That allowed a capitalist resurgence and thereby the resumption yet again of another drive to crisis. When that happened in 2008-2009, the absence of a serious left opposition precluded anything like another New Deal. After 2008 we had only bailouts (much bigger than FDR’s in the 1930s). Oblivious to capitalism’s history, today’s centrist Democratic Party leadership waits for Trump’s demise so it can resume the Clintons’ legacy: another drive to crisis. 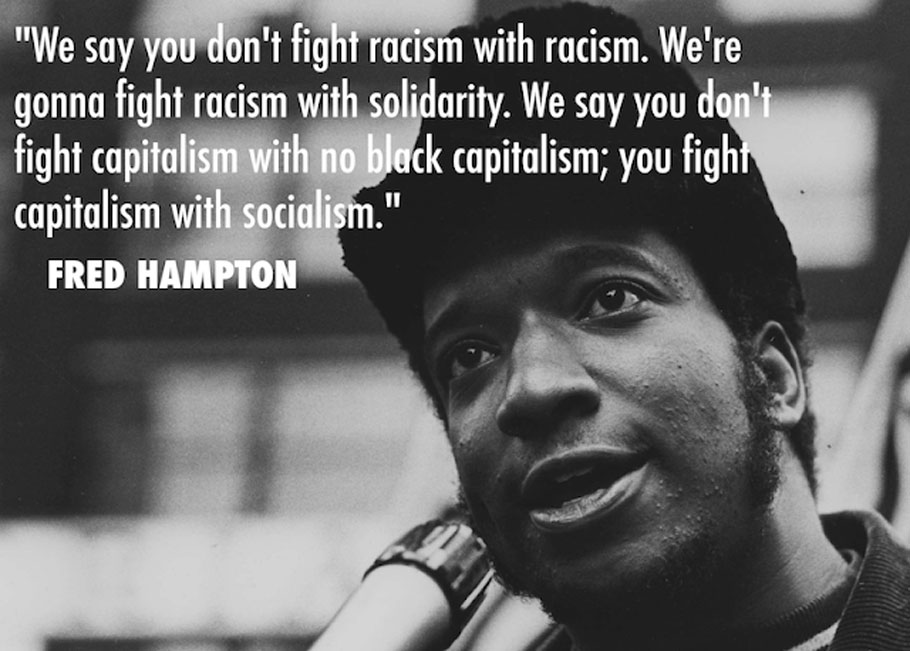 “What matters basically is this: social change requires serious, organized opposition to the status quo.”

While no broad-based national opposition yet exists in the US, there are signs of it struggling to be born. Public school teachers—some with and some without union supports—became active finally against years of public school funding cutbacks accelerated under the grotesque DeVos administration. The striking teachers’ success in West Virginia showed what serious, organized opposition can do. Likewise the high-schoolers from Parkland, Florida, organized opposition to the gun lobby, mocking the fakeries and lip-service of so many others. Consider too the proliferating organizations of and for worker coops as a democratic alternative to undemocratically organized capitalist enterprises.

There are more examples, but what matters basically is this: social change requires serious, organized opposition to the status quo. The further the social change seeks to go, the better organized its proponents within that serious opposition need to be. Defeating a particular politician takes less organizing than defeating a political party and that, in turn, takes less than making a transition to a better, different economy.

DuBois understood that capitalism’s drive to self-destruction would eventually prompt last-ditch efforts to save the system. We see these now in the sorts of extreme deregulation, tax cuts for business and the rich, etc. undertaken by the Trump regime. The bubble and subsequent recession to which they are building plus the extreme income and wealth inequalities that they worsen are signals of impending serious opposition. So too are the efforts to distract attention from system-critique and toward selected scapegoats, non-white immigrants especially. Revulsion is building towards the smokescreens of hypocrisy, racism, and nationalism barely masking capitalism’s ongoing failure to provide the jobs and incomes people need.

DuBois split his political efforts between appealing to African-Americans to embrace anti-capitalism and to socialists to embrace anti-racism. In his view, no program to establish socialism in the US could succeed or survive so long as African-Americans were kept as employees or unemployed. Likewise, no program to abolish racism was possible within the US capitalist system.
Racism in the US had settled deeply into the economics, politics and culture of the US since its inception. It had adjusted itself to capitalism and vice-versa. Their interdependence or partnership was deeply structured. Thus, for example, US capitalism could use racism to solve the problems of two of its worst features: instability and inequality. 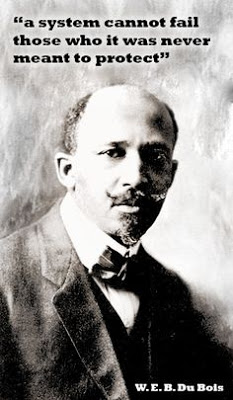 The business cycles ever besetting capitalism threatened the entire working class with periodic unemployment, poverty, etc. That constant threat—as well as the recurring downturns themselves—risked provoking working class opposition to capitalism as a system. Racism facilitated offloading instability’s risks and costs onto the African-American community that was last hired, first fired. A large part of the white population could thus escape capitalism’s instability or suffer less from it. Racist arguments then blamed African-Americans for their unemployment and poverty by contrasting it with that of most whites. Racism and capitalism reinforced one another in this way.

In parallel fashion, capitalism’s incessantly rising inequality threatens the entire working class with relative and often also absolute poverty. Racism assigns African-Americans to the bottom of the income and wealth distributions (via racist hiring, housing, schooling, public policies, and attitudes). Many whites feel less threatened by capitalism’s drive to ever greater inequality because a disproportionate share of that inequality is dumped onto the African-American community.

Whites have a constant exhibit of “it could be worse” flowing from that community’s living conditions.

A partnership between anti-capitalism and anti-racism within social movements and in public discourse could dissolve the mutual reinforcement between racism and capitalism and thereby advance progressive social change. Today’s capitalism includes contradictions pushing toward that dissolution. Long-term wage stagnation and profit-driven technical changes are subjecting more and more whites to conditions previously limited largely to African-Americans. Hence the household disintegrations, drug dependencies, etc. long afflicting African-Americans are increasingly suffered among whites as well.

The resurgence of white-supremacy represents anxiety about descent into conditions that capitalism and racism had earlier let most whites escape. It is the other side of whites’ recognizing their basic employee position within capitalism as shared with African-Americans. Capitalism’s current development (the rush to privatize, cut taxes, export jobs, automate, etc.) drives conservatives (not just Trump) to cultivate white-supremacy against the growing working class solidarity the system itself generates. In the light of DuBois’s concept of capitalism’s “self-destruction,” might today’s polarizing politics (Trump), ideologies, culture and economy be its multiple signs? 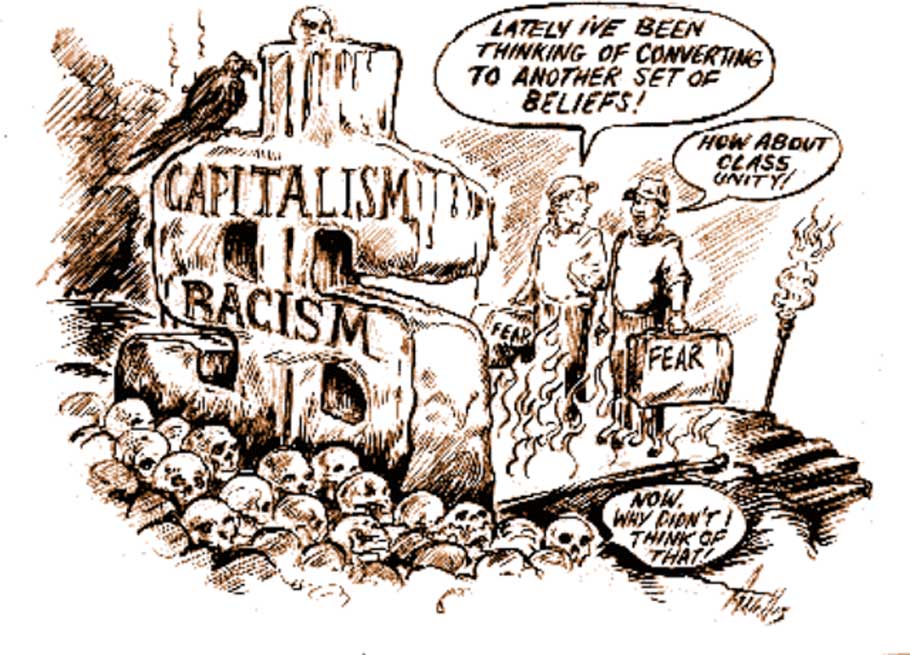