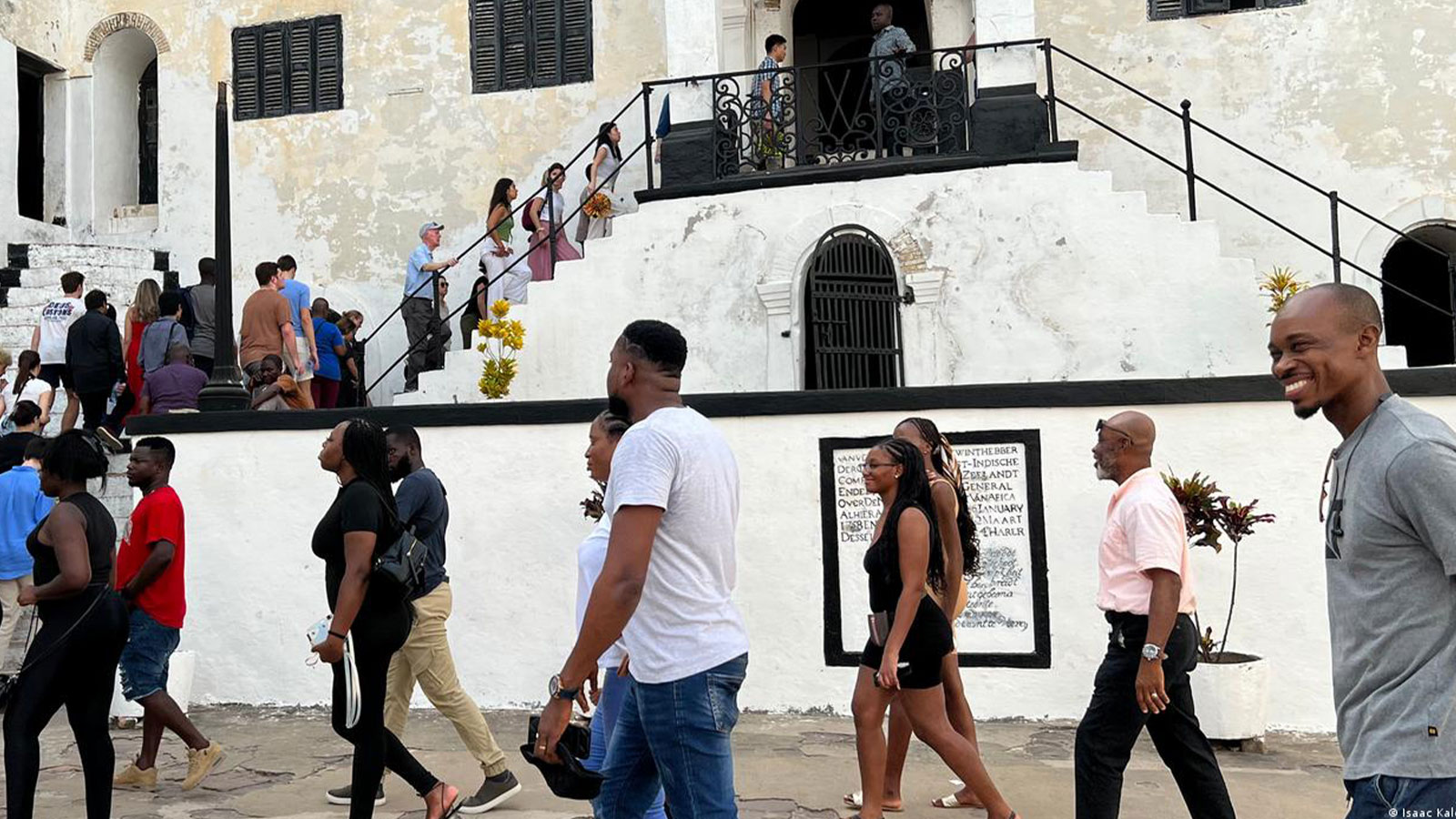 Why African Americans are flocking to Ghana

You Are Here: Home » Blog » Editors' Choice » Why African Americans are flocking to Ghana

African Americans are returning to countries like Ghana more than 400 years after their ancestors left Africa as slaves. Many say they want either to reconnect to history, or resettle on the continent.

Tonya Saafir-Ankomah originally hails from Mississippi in the United States of America, but more than ten years ago, she decided to move abroad.

“I had this strong urge to come to Africa. I wanted to experience it. Something has been tuagging at my heart to come and visit the motherland,” she told DW. Saafir-Ankomah said she was inspired by a couple from Tennessee who had visited Ghana several times.

“They [the couple] would talk about it all the time, show me pictures, videos and things like that, which stirred up a desire in me even more to come.”

The first visit to Ghana

Saafir-Ankomah finally made it to Africa for the first time in 2010, and Ghana in West Africa was her destination.

She quickly fell in love with the continent. The trained lawyer now lives in the capital, Accra, and married a Ghanaian.

“I love it here, I would much rather be here than in the [United] States for sure,” she said. Saafir-Ankomah has since become an ambassador urging many Africans in the diaspora to visit Africa to experience the rich heritage. 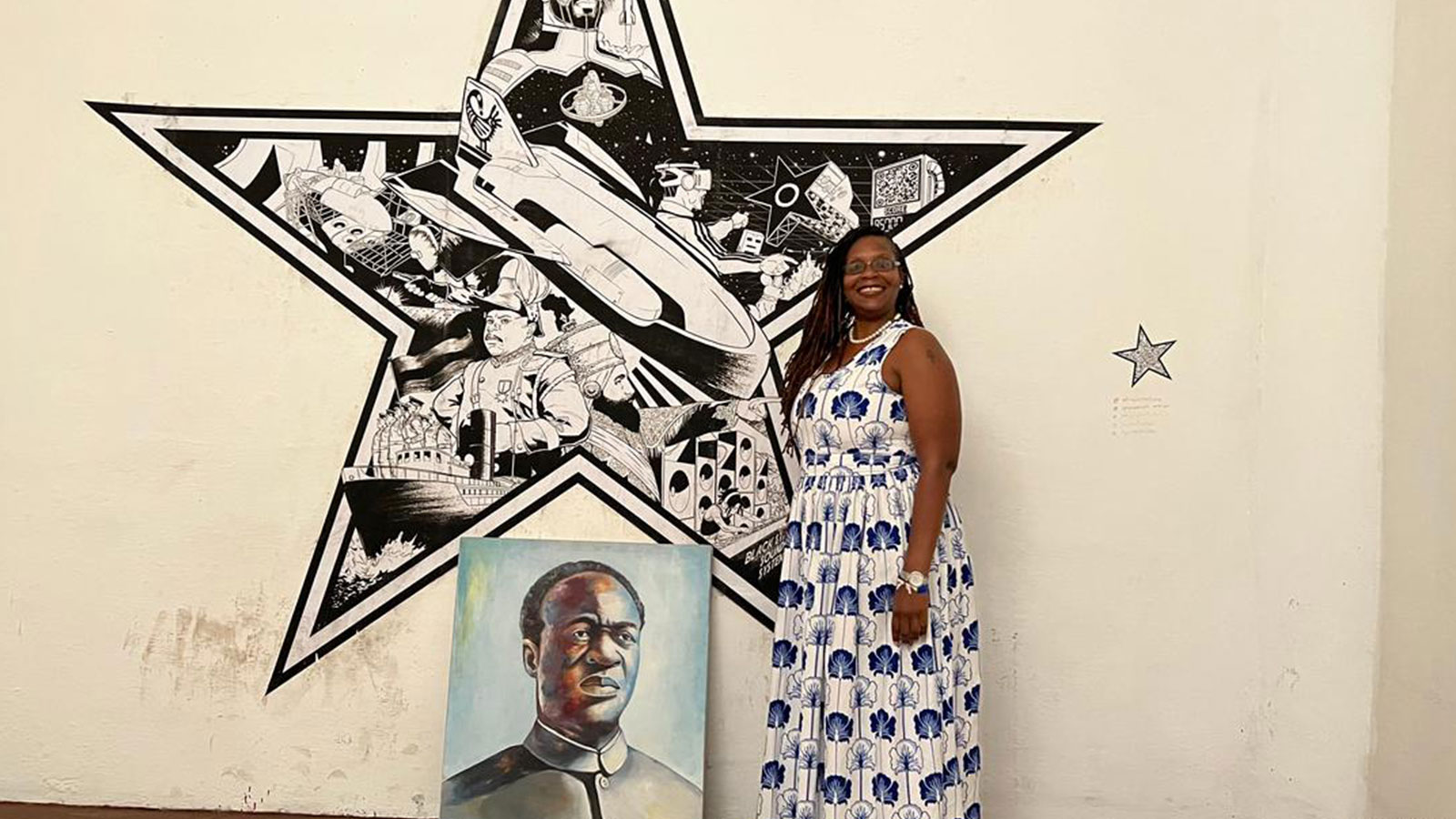 The call to return

At least 1,500 African Americans have moved to Ghana since 2019, following a campaign by Ghana’s government. The campaign, dubbed the “Year of Return,” became a catalyst for many descendants of Africans in the diaspora to embark on a spiritual journey.

At the time, it also marked 400 years since the arrival of the first enslaved Africans in Jamestown, Virginia.

“The Year of Return” was also to celebrate the resilience of all the victims of the trans-Atlantic slave trade who were forcefully displaced throughout the world, ending up in North America, South America, the Caribbean, Europe and Asia.

The COVID-19 pandemic in 2020 did slow visitors but hasn’t stopped African Americans from traveling to West Africa. One of the main highlights of such visits is to tour some historical sites, such as the slave castles in central Ghana, to remind them of their ancestry and to reconnect with the continent. 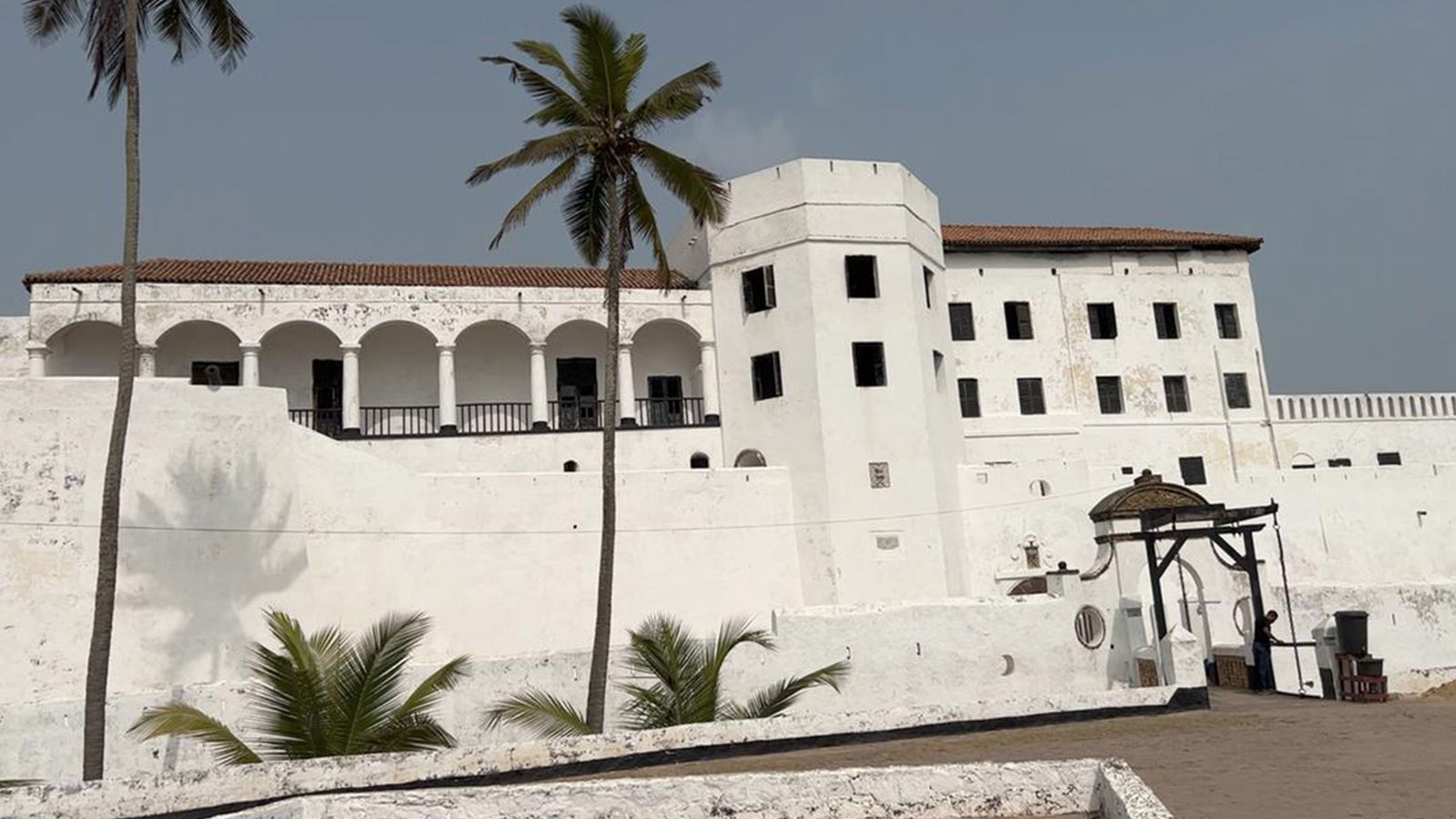 The Elmina Castle is the oldest European-built structure south of the Sahara (Image: Isaac Kaledzi/DW).

In 2020, Ghana’s government launched what it called the “Beyond the Return” campaign. It is a ten year project with the theme, “A decade of African Renaissance — 2020-2030.”

Clifford Ato Ashun, a senior member of the Museums and Monuments Board of Ghana, told DW that the campaign continues to chalk up much success.

“The [two campaigns] actually have contributed immensely to the arrival of the African diaspora, especially to visit Ghana and the [slave] dungeons,” Ashun said.

According to Ashun, there are other activities to keep the interest high among Africans in the diaspora too, including music festivals.

Getting closer to African roots

Felisa Freeman, originally from California, is one of the hundreds of African American visitors touring the Cape Coast Castle. It is her first time in Ghana and first time on the African continent, she told DW.

“My expectation is to experience Africa and culture and sort of soak it in, and get a little closer to my roots,” Freeman said.

The Cape Coast Castle, now a UNESCO World Heritage site, is the largest of the buildings based around the legacy of the trans-Atlantic slave trade.

It played a significant role in the gold and slave trades, the arrival of Christianity, and the establishment of the first formal education system.

The slave dungeons — for both male and female inmates — tell the sad story of how Africans shipped across the Atlantic endured torture and inhumane treatment at the hands of their European masters. It is always an emotional moment for visitors. 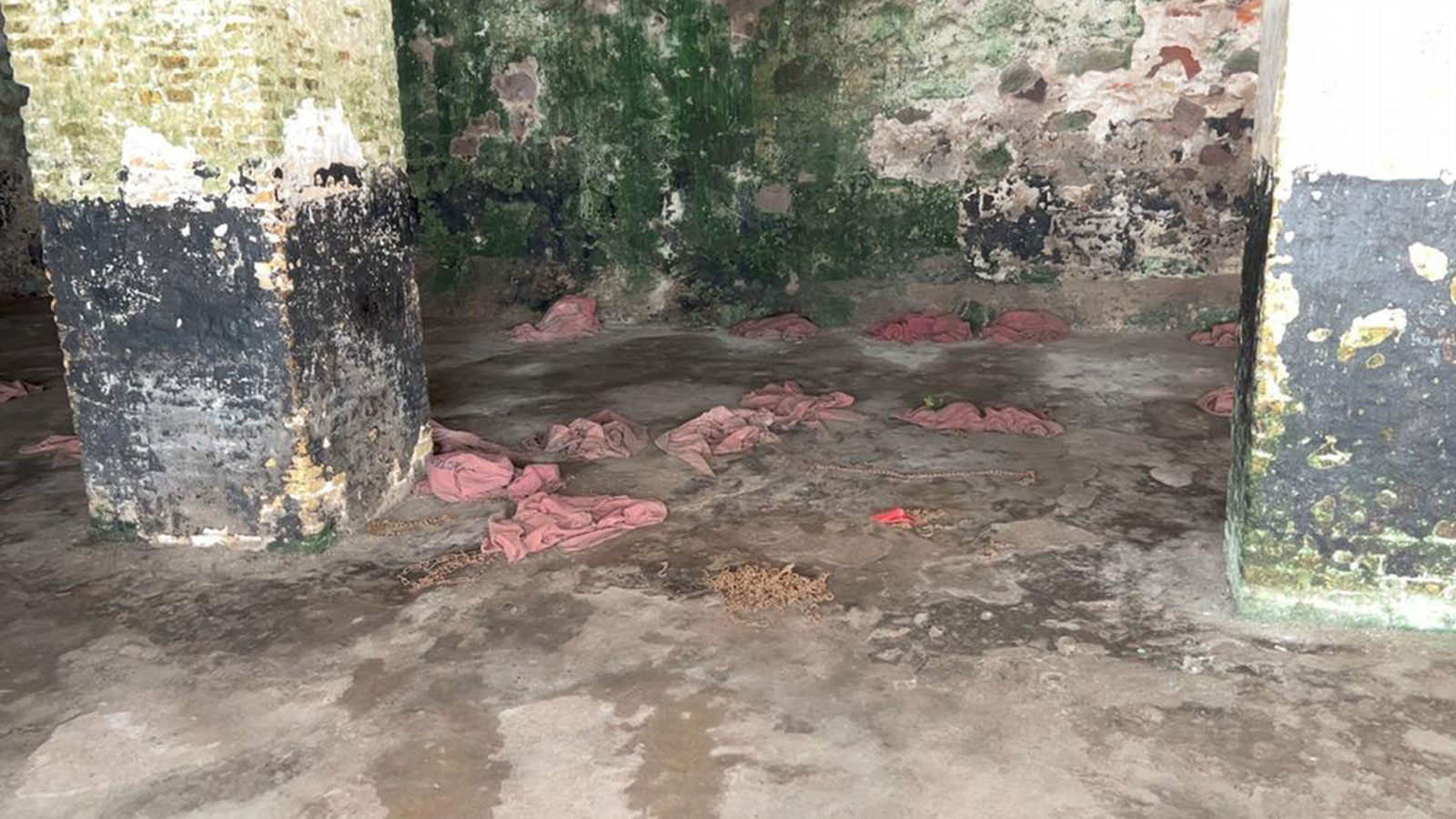 “Coming to the Cape Coast Castle is a connection with history,” Freeman said, adding that it gives her the opportunity to see the route her ancestors potentially took to the US.

“You just get to see the nature of human struggle for dominance,” an emotional Freeman said. The castle still has remnants of the cannons and mortars used in its defense centuries ago.

The historical museum inside the castle contains a growing collection of art and cultural objects, including ceremonial drums, old muskets, shackles from the slave trade and ancient pottery. 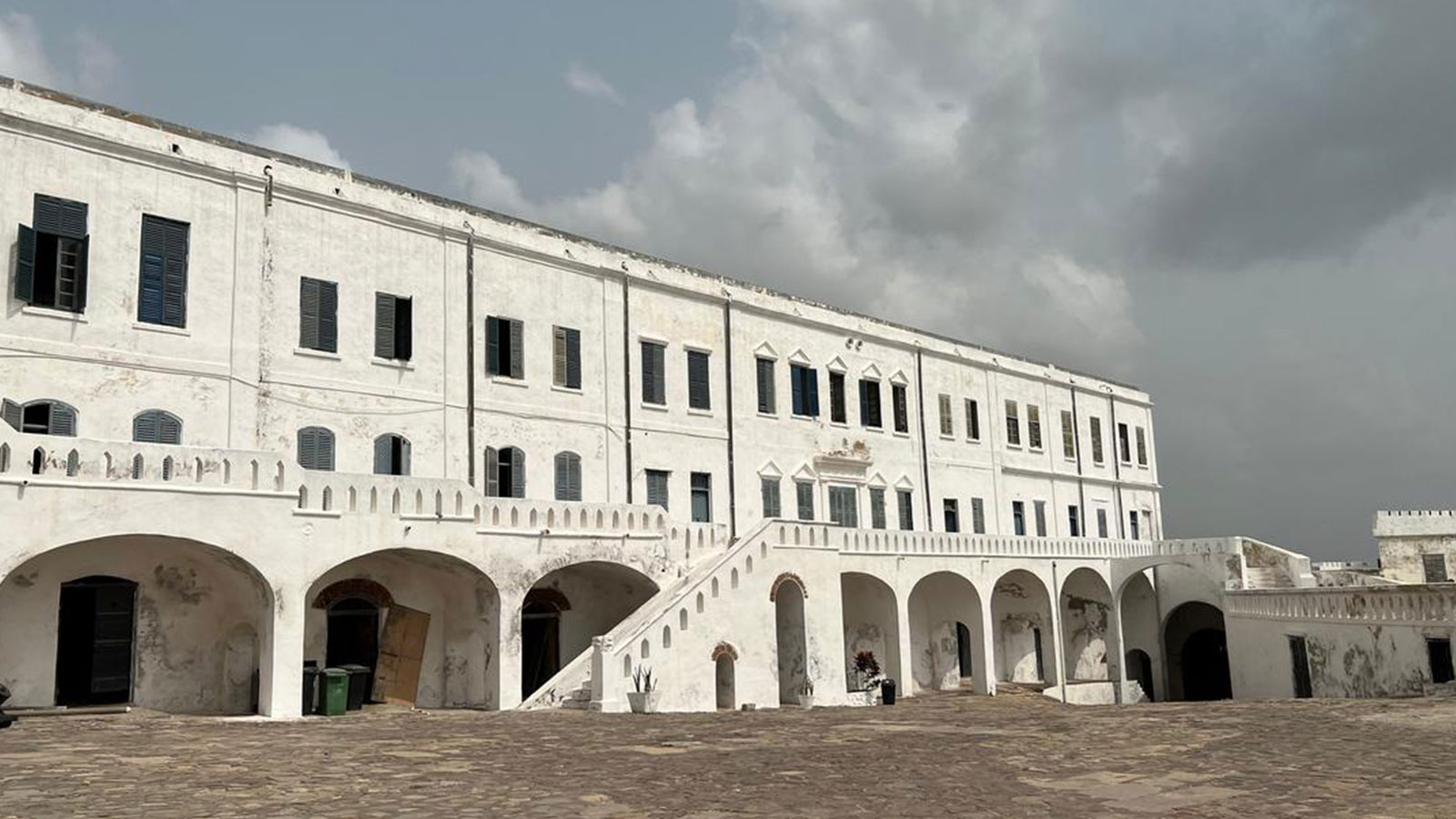 The Cape Coast Castle tour is often an emotional visit for descendants of the slave trade (Image: Isaac Kaledzi/DW).

Tonya Spinkins is also visiting Ghana from the US for the first time. “I came here because I realized that the many stories about enslavement that I get to see in Hollywood movies are lacking African-ness,” she told DW.

“The hardship of enslavement was the rape and the violence,” Spinkins noted.

The former fort had an infamous “door of no return” through which hundreds of thousands of slaves passed, never to return to their homeland. It is the final point of call for visitors when they tour the Cape Coast Castle.

Tour guides now allow tourists to exit the same gate and to return through it, but this time, upon re-entering, they see a new inscription which reads the “door of Return.”

It is a sign that Africans in the diaspora, whose ancestors were taken away during the slave trade, are always welcome back to the continent ⁠— a place they can call home. 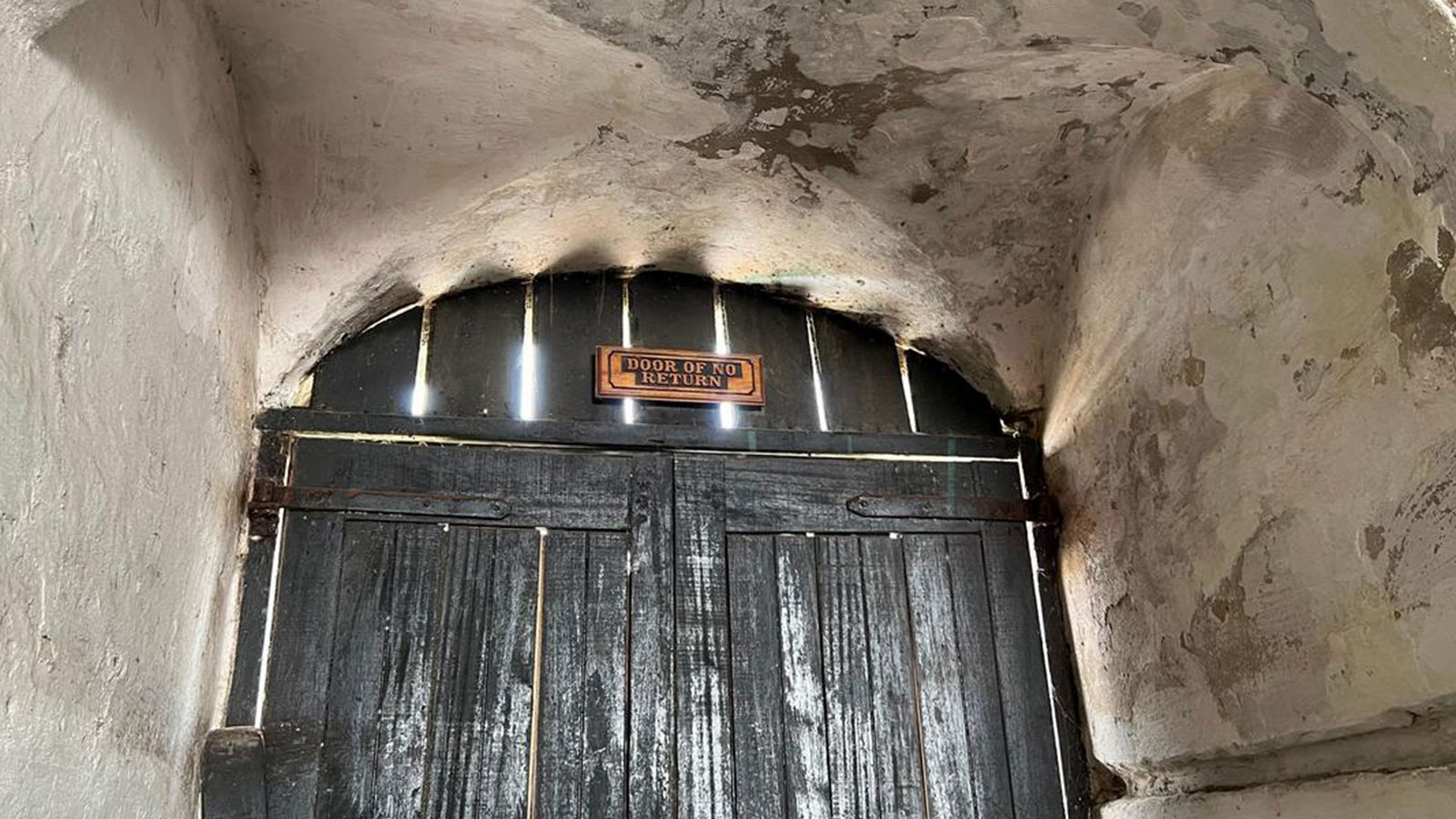 The “door of no return” at the Cape Coast Castle was the point of no return for slaves (Image: Isaac Kaledzi/DW)

History, but not just for Africans

Some 12 kilometers (7 miles) away from the Cape Coast Castle is the Elmina Castle. The UNESCO heritage site was the first trading post built on the Gulf of Guinea and is the oldest European-built construction south of the Sahara.

Blake said the rest of the world also needs to understand what the African slaves endured centuries ago.

“Other people connected [to the history of slavery must visit] to understand our history, to try to make sense of the world we live in and to try and understand our lives,” Blake told DW.

Most visitors also tour the Assin Manso Slave River park, which is also in the central region. It was one of the largest slave markets and the river served as the place where slaves had their last baths before being taken to the dungeons and sold.