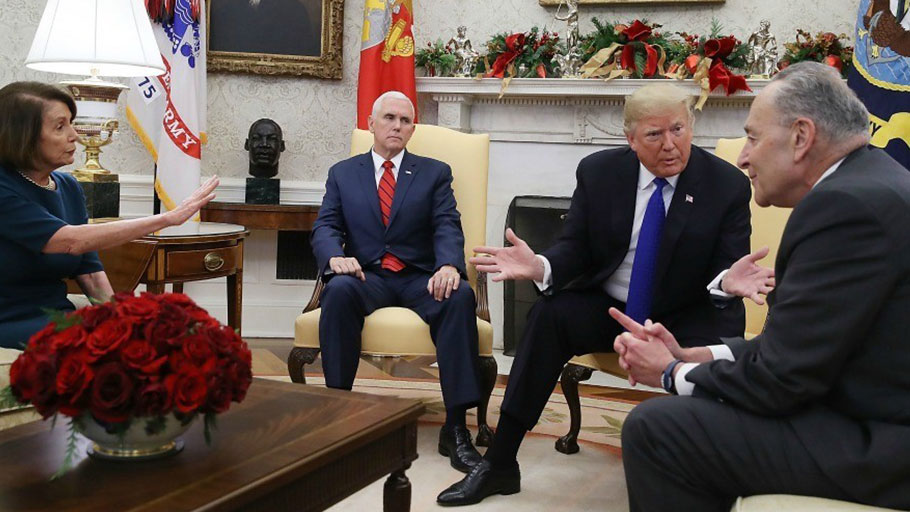 “If major tax increases are off the table, there is no way to pay for a $2 trillion infrastructure plan, it’s that simple.”

With President Donald Trump and Democratic leaders set to meet Wednesday to discuss a possible $2 trillion infrastructure package, a progressive advocacy group on Monday warned that any proposal that doesn’t include significant tax hikes on the rich and corporations “will be meaningless and doomed to failure.”

“Without asking more from the wealthy and corporations, the plan will be just another empty promise while our roads, bridges, rail lines, and public buildings continue to deteriorate.” —Frank Clemente, Americans for Tax Fairness

“If major tax increases are off the table, there is no way to pay for a $2 trillion infrastructure plan, it’s that simple,” Frank Clemente, executive director of Americans for Tax Fairness (ATF), said in a statement. “Other options, such as raising the gas tax, might be part of the package, but by themselves won’t come close to reaching the $2 trillion that’s needed.”

During his scheduled meeting with House Speaker Nancy Pelosi (D-Calif.) and Senate Minority Leader Chuck Schumer (D-N.Y.), Trump is expected to unveil a plan to fund an infrastructure package.

“It will be interesting to see what the president comes up with,” said Clemente. “But without asking more from the wealthy and corporations, the plan will be just another empty promise while our roads, bridges, rail lines, and public buildings continue to deteriorate.”

Clemente pointed out that while Senate Democrats have proposed rolling back some of the tax cuts for the rich and corporations in the Trump-GOP tax law as a way to pay for an ambitious infrastructure plan, congressional Republicans have signaled they would oppose such a move.

And, as The Hill reported last week, Republicans in Congress “have indicated they are unlikely to support an infrastructure package” with a $2 trillion price tag “unless they can reach a deal on how to pay for it without adding to the deficit.”

“None of these objections were raised by Republicans when they passed their tax cuts for the wealthy and big corporations that weren’t paid for and added nearly $2 trillion to the debt,” Clemente said. “They continue to insist that the tax cuts will pay for themselves, but that won’t happen.”

Following negotiations with Trump last month, Schumer told reporters that Democrats called for 80 percent of the infrastructure plan to be funded by the federal government and 20 percent by localities. At the time, The Hill reported, Schumer also suggested including a “public-private partnership element” in the plan.

While Trump’s infrastructure proposal last year called for public-private partnerships, the president last month denounced such arrangements as “stupid” because “you get sued.”

“Only about 12 percent of infrastructure projects offer a return that would attract private investment,” according to ATF, “and the tolls and fees necessary to make the projects viable would disproportionately tax working families while providing long-term guaranteed profits for big corporations and Wall Street.”