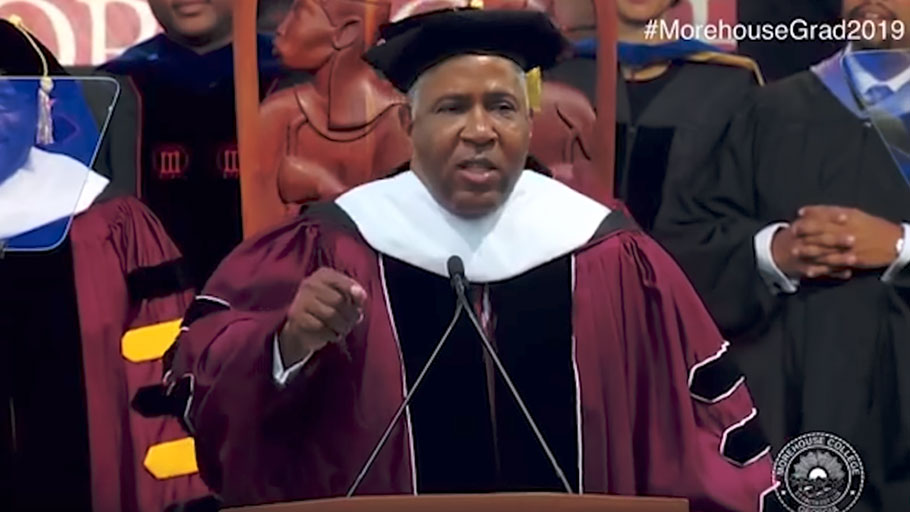 At their graduation on May 19, investor and chemical engineer Robert Smith announced he would pay off the student loan debt of Morehouse’s 2019 graduating class. (Screenshot from Washington Post Video – Watch video)

During what will likely be seen as one of the most memorable graduation presents for parents and their children — a quiet African American billionaire delivered a welcomed surprise.

At their graduation on May 19, investor and chemical engineer Robert Smith announced he would pay off the student loan debt of Morehouse’s 2019 graduating class.

Morehouse’s graduating class is 400 strong. Smith’s graduation gift is one that will allow graduates of one of the most storied all-male historically Black college to start their careers with no student loan debt.

Given today’s statistics regarding student loan debt, this is no small gift. Morehouse officials estimate Smith estimates that his gift is worth over $40 million.

“On behalf of the eight generations of my family that have been in this country, we’re gonna put a little fuel in your bus,” Smith said his speech to the class of 2019, their families and Morehouse faculty.

“My family is going to create a grant to eliminate your student loans,” Smith added.

Smith, who is an investor and tech billionaire, is the founder and CEO of private equity firm Vista Equity Partners. In 2018 he was ranked by Forbes magazine as the 163rd wealthiest person in the U.S.

Smith’s net worth is estimated to be over $4.4 billion.

This year, student loan debt in America has topped $1.5 trillion. There are currently more than 44 million student loan borrowers in the U.S. The average tuition at a private college or university is currently $34,000.

Billionaire investor and philanthropist Robert F. Smith had a special announcement during his commencement speech at Morehouse College in Atlanta on May 19.